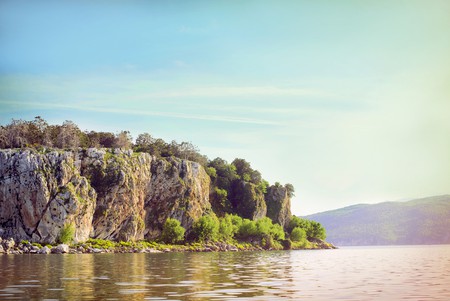 There’s no question that Brazil is home to some of the most unbelievable places in the world. Among all the beauty, however, lies a terrifying secret – so terrifying, in fact, that it’s actually illegal to visit.

This extremely scary island goes by the name of Ilha da Queimada Grande. Located 90 miles off the glittering São Paulo coast, it seems just like any other island in the South Atlantic. However, it hides a dark secret that almost every Brazilian knows about: it’s infested with an estimated 4,000 golden lancehead vipers, one of the deadliest and most venomous snakes on the planet.

Because of the island’s killer inhabitants, it’s been given the apt nickname ‘Snake Island’. If bitten, the viper’s nasty venom can kill a person in as little as an hour. According to legend, one wandering fisherman scoured the island in search of food (mostly bananas) and was supposedly discovered days later, stone cold, dead, in a pool of blood with hundreds of snake bites all over his body – lovely.

Despite the poor fisherman’s fate, a few very brave souls lived on the island from 1909 to the 1920s to help run the island lighthouse. Sadly, an urban legend recalls that the lighthouse keeper and his whole family were all killed after an army of slithering snakes broke into his home through the windows.

So why are these horrible creatures here? Some say pirates put the snakes on the island to protect all their stolen treasures, mostly gold. Mother Nature did her thing and voila – a few snakes became hundreds and then thousands.

Now the island is illegal to visit, but that hasn’t stopped a few mad (literally) scientists from exploring. Care to join them?

Inspired by the forbidden? It’s illegal to visit these 11 places in the world, and here’s why!