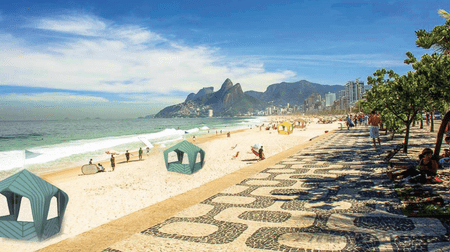 Little huts dot the beaches of Rio de Janeiro, offering refreshments and entertainment to visitors. Known as barracas, these kiosks are a symbol of the city’s beach culture and gathering points for residents and tourists. A new design project is restyling the stalls of the city’s seaside, combining sustainability and technology to reshape the famous spots.

The beach is the center of the carioca (as the people of Rio de Janeiro call themselves) way of life and the place to be to experience the vibrancy of the city. From the crack of dawn, people begin walking along the shores, while the beat of samba music lilts from loudspeakers. Lively matches of frescobol (a traditional Brazilian game) take place across the sand, and fitness circuits keep the area busy until night-time. The beaches are a spectacle, and there’s nothing better than stopping at one of the many kiosks to buy a fresh caipirinha cocktail, sit back and watch life on the seashore pass by. 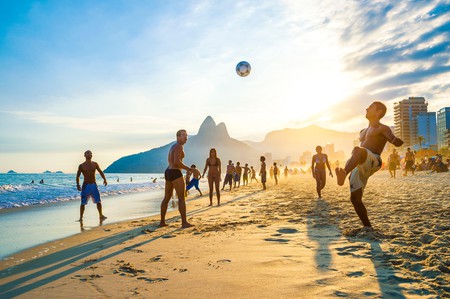 A symbol of Rio de Janeiro shores, the kiosks are beach huts that lie between the sea and the small restaurants and bars on the promenade, offering a point of refreshment and all essentials needed for a day in the sand. The kiosk owners are well known by locals and can be found in the same spots every day. Known as barraqueiros, these owners are a real institution on the coast. Their day is full of activities: renting chairs and parasols to tourists, preparing fresh drinks to sell, guarding bicycles and chatting with friends and regulars. And their kiosks are now entering the future, with built-in sunblock, solar power and even Wi-Fi.

At the end of 2019, The European Institute of Design (IED) launched a project to create a new sustainable, high-tech model of the barracas, which will be funded by the advertisers placing their ads on the kiosks and deck chairs. The team is led by designer Flávia Souza (head of the furniture design course at IED), together with Erick Araújo and Lívia Cavalcanti (two designers and former students of the course). “The request came from the Sol e Mar association, a collective of the kiosk owners of the city,” explains Araújo. “They realize the importance of keeping up with the times if they want to continue being the center of beach life and offer a good service to beachgoers and to themselves as well, as the current huts are difficult to build and maintain. And we decided to create a team to work on the project with them.” 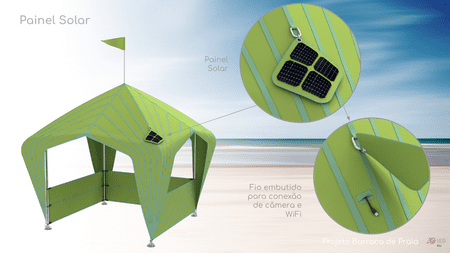 The new design for the beach kiosks will include solar panels, Wi-Fi, security cameras and recycle collection systems | Courtesy of The European Institute of Design

Haroldo Couto, the founder of the Sol e Mar association, launched the idea of redesigning the kiosks in 1995. At that time and with the help of architect Tania Braida of Beta Arquitetura and Dona Alzira (one of the kiosk owners in Copacabana), he invited the barraqueiros to meet up and discuss a plan. They proposed each seller would have a white tent with kits of chairs and umbrellas, to try and make the beach more organized. “We have now presented our previous idea to the IED institute to seek their collaboration to go ahead with the plans,” says Couto.

The newly designed kiosks will be square-shaped and easy to open in one move, similar to a parasol. They will be made of aluminum and sailcloth, with UV ray protection to shield from the harsh heat of summer in Brazil. Additional features include a collection system for recyclable and organic garbage, small solar panels on the top, as well as Wi-Fi and security cameras. All the new kiosks will be built to have as little impact on the surrounding environment as possible. Even the color choices will reflect nature with pastel blues, greens, yellows and oranges, preserving the beauty of the beach. The newly designed kiosks will first launch in the neighborhood of Urca, where the design school is located. They will then be distributed all over the city’s Zona Sul (South Zone), where the world-renowned beaches of Copacabana and Ipanema also lie. 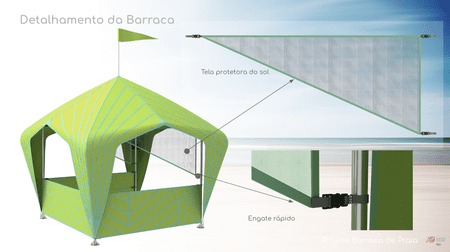 Local barraqueiro Robson Silva is enthusiastic about the news. He is looking forward to working with the easier and lighter design, which will help facilitate the opening and closing of the tent every day without having to carry the heavy metal bars of the current ones. He works at the Barraca da Baiana, a beach kiosk owned by Dona Inalda, who has been at the same location for around 40 years and is excited about the new project. “My children grew up here. I taught them how to swim. I married them here,” says Inalda. “I am very proud. Getting a new kiosk is an exciting moment for me.”

The beaches of Rio de Janeiro are still considered a truly democratic place in a city of huge disparity, where people from all backgrounds and neighborhoods gather to enjoy the sun and the waves. But the shores are also keeping up with the times. Looking around today, you’ll see electric scooters zip next to pedestrians on the black-and-white sidewalks, and interactive touchscreens located at various intervals along the beach allow you to search on a map for the best walks, offer free Wi-Fi and sightseeing tips, and let you take selfies to share on social media. With the number of tourists increasing every year, new exciting projects such as IED’s new kiosks are at the forefront of the future of Brazilian beach life. 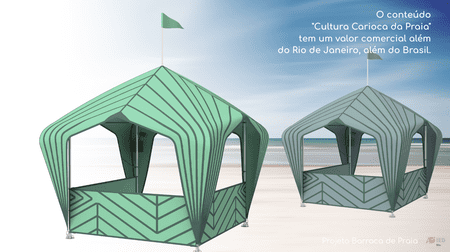