The Story Behind the Boteco: the Backbone of São Paulo Drinking Culture 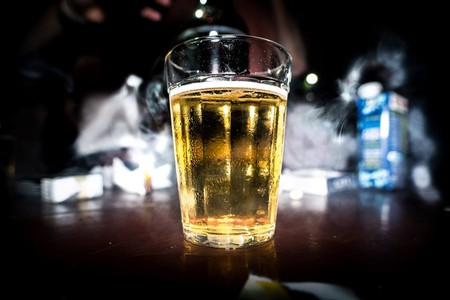 Beer at a São Paulo boteco | © Courtesy of Bella Jaú

After visiting São Paulo, you’ll probably pick up at least a few words in Portuguese. Tudo bem, por favor, obrigado… and arguably the most important of them all, boteco. Botecos are the informal bars found on every street corner in the city, coming in all shapes and sizes, from large spaces with live music to grubby holes-in-the-wall, each one more charming than the last. One thing is certain: if the majority of your visit to São Paulo doesn’t involve sitting in a boteco, you’re doing it wrong.

The word boteco is a neologism, a back-formation from the old Portuguese words botica and the diminutive botiquim, which originally meant “general store.” It shares the same roots as bodega, coming from the Ancient Greek apothḗkē. Originally, botecos were, in fact, small general stores, selling essential items, some food, and alcohol. Now they focus on the latter, becoming these small, no-frills bars that are the cornerstone of drinking culture in São Paulo and Brazil as a whole. 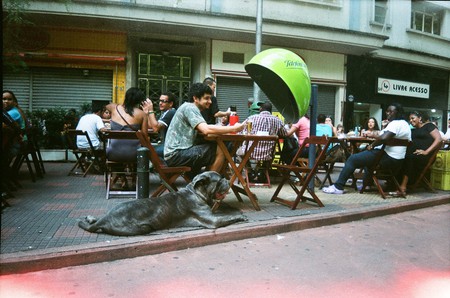 A classic São Paulo boteco with outside seating | © Igor Schutz/Flickr

São Paulo has experimented with British-style pubs, but the concept has never really taken off. Overpriced and with sanitized atmospheres, São Paulo’s pubs are more of a gimmick than actually regular drinking spots. What’s more, who would want to sit inside a dark pub when the sun is shining outside? For the Brazilian climate, the boteco is the winning formula.

Equally, for tourists, botecos are a joy. The prices are dirt cheap, especially for those coming from the U.S.A. or Europe, and the atmosphere is always inviting. One hour spent at an outdoor table observing the comings and goings around you would give enough material for a dozen sociological studies. It’s also a great place to meet people. Someone sitting at a boteco table by themselves is unlikely to be alone for long, as there are always locals looking to strike up conversations or even invite you over to drink with their friends.

As botecos are so ubiquitous in São Paulo and Brazil as a whole, they can be easily grouped into a number of sub-categories. (But make no mistake, no two botecos are identical.) The most famous and traditional type is the pé sujo—literally translating as the “dirty foot.” Similar to the “dirty glass” bar or a “greasy spoon” diner, a pé sujo is recognizable for its less-than-optimal sanitary standards, cheap decoration, and faithful local patrons. The drinks are cheap and plentiful, yet not always the tastiest. That said, when it’s pushing 35 degrees Celsius, you won’t care where the beer comes from, as long as it’s ridiculously cold—which is one thing you’re guaranteed to get in a pé sujo. The entertainment rarely goes beyond old karaoke machines or 1990s jukeboxes, but the atmosphere is still hard to beat. These bars are usually found all over the city, though they can be a bit harder to source in wealthier areas of the city, which tend to opt for something fancier (see below).

Despite the popularity of the pé sujo, Paulistanos, in general, are very clean and pay a lot of attention to their personal hygiene. As a result, in wealthier parts of São Paulo, the botecos are a bit more exclusive, the beer is a bit more artisanal, the food is a bit more expensive, and the floors are a bit cleaner. It’s not quite the real thing, but if you’re fed up of beer that doesn’t taste of much, and snacks that have been reheated for the last three days, it makes for a welcome change. Examples of such fancy botecos are Bar Veloso (Rua Conceição Veloso, 54, Vila Mariana), home of the city’s best coxinhas, and Boteco Paramount (Rua dos Pinheiros, 1179, Pinheiros). 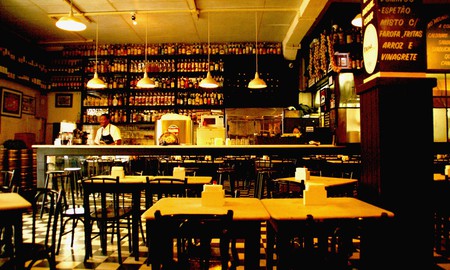 The cheapest beer in town

As you may have gathered by now, the proper boteco experience abandons the stylishness and elegance of upmarket bars and replaces it with simplicity and cost-effectiveness. One of the best examples of this is the phenomenon of the litrão barato or “cheap liter.” While traditionally, beer in Brazil is served in large 600-milliliter bottles and shared among friends, some botecos take this to the next level, selling one-liter bottles of mass-produced brands such as Brahma, Skol, and Itaipava, making them proportionally cheaper than their 600-milliliter younger brothers. 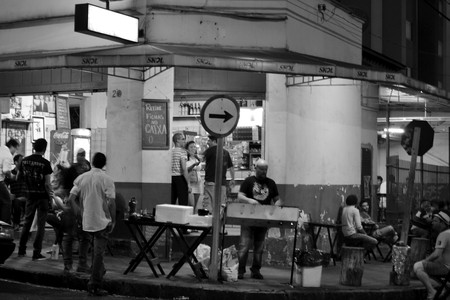 A typical scene at a São Paulo boteco, complete with roadside barbecue | © larissacabelo/Flickr

The hunt for São Paulo’s cheapest litrão occupies discussions on social media and has even led to the creation of apps to map prices. Often a good way to break the ice with a Tinder match is to compare the cheapest litrão price you’ve found in the city. Give it a try, you might get a date out of it. Popular spots for a litrão barato include lefty student hangout Bella Jaú (Alameda Jaú, 2027, Cerqueira César) and Vamu no Japa (Alameda Santos, 2482, Jardim Paulista), which also serves surprisingly tasty, and equally cheap, Japanese food.