The Most Beautiful Beaches to Visit on Santa Catarina Island 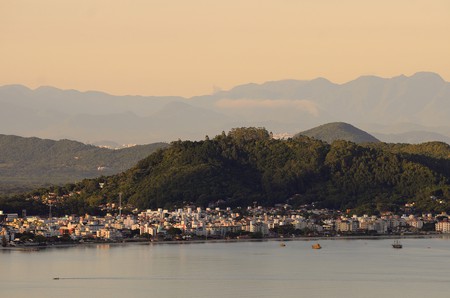 The Brazilian province of Santa Catarina is highlighted by its capital, Florianopolis, or Floripa as it’s nicknamed, but behind the metropolis is an absolute wonderland of jungle, mountains, rivers, waterfalls, lakes and, of course, beaches. In fact, there are 42 beaches on the island of Santa Catarina, which is for good reason known as Ilha da Magia, the island of Magic. We look at this paradise and list off the top beaches to visit all around the island.

One of the most popular beaches on the island is also one of the most unique, as a winding river from Lagoa de Conceição cuts through the town and empties into the ocean right by the beach. The beach is a long strip of gold, lined with bars, cafés and restaurants where you can get caipirinhas served right to your beach chair.

For a more petite and tranquil chunk of sand in Barra, you can cross the blue bridge over the river and wind your way through the tight paths until you reach a fork in the road. Go left and you will descend onto a tiny strip of sand that is, for whatever reason, often ignored. Here you have a small strip of sand in a tight cove, which is perfect for swimming and the piscinas naturais (natural pools) are just a 15 minute saunter along the trail in the other direction. 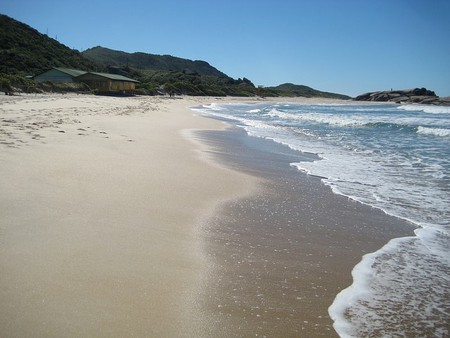 To get to this enormous stretch of gorgeous beach, you will have to cross to the eastern shores of the island. Access by vehicle is much easier than public transportation but, whatever your way of getting there, the short journey is worth it. As you are about to exit Rendeiras and approach the left turn to Barra da Lagoa, continue straight ahead until you see paradise appear through the windshield. The beach is protected to the north by a rocky point, where you will find restaurants, and then the beach stretches out for miles, uninterrupted until you reach the town of Campeche. 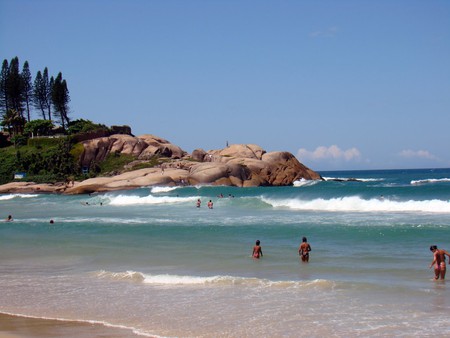 The word Lagoinha refers to the “little lagoon” behind the beach, which cuts the sand in half and empties into the ocean for a stunning natural spectacle. The easiest way to access this beach is with an organized tour, as the roads leading down to Pântano do Sul do not lead to the beach, but you can try and wing it yourself and find the path that leads to the untouched beach. 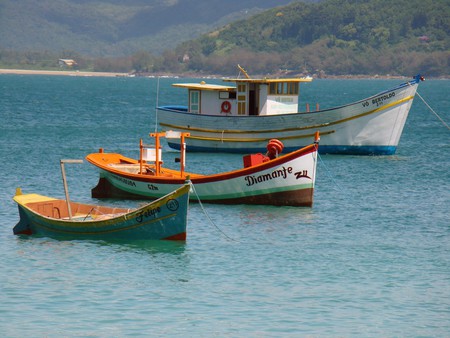 The town of Campeche has a strip of beach that lines the town, which is an extension of Joaquina. However, the real gem of this part of the island is another little island off the mainland. The Island of Campeche has nothing but nature, a couple bars and maybe the nicest, finest sand in all of Santa Catarina. Boats leave to Ilha do Campeche from different parts of the island, including Barra da Lagoa, Armação and of course Campeche, so you can head there from the port nearest you. 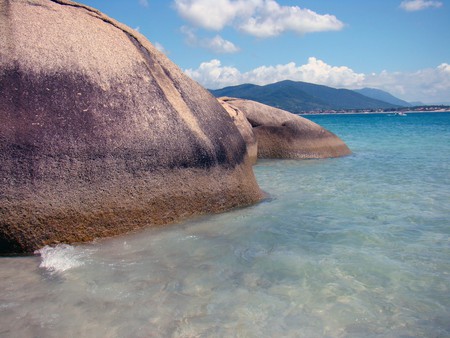 If you are looking to catch some waves, or clean your tan lines, then Mole Beach is for you, as the popular beach just off the road that leads to Barra da Lagoa is known for some good waves and also for have a nude portion.

Not feeling so comfortable about a nudist beach? Then continue on a little further and keep your eyes peeled for the discreet turn off and mud parking area to the right, which is the entrance to the path to Praia Galheta. The other option is to go from the Barra da Lagoa side, and continue along the trail from the natural pools. No matter how you arrive, you will be treated to a postcard-worthy beach, and water with a backdrop of lush green jungle. 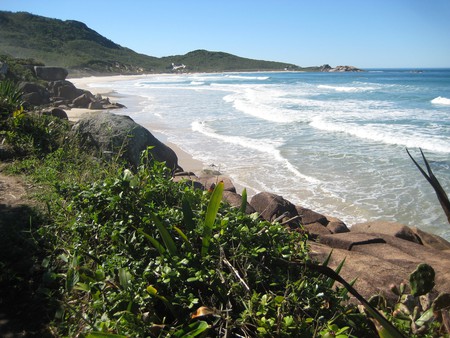 The farther you move south on the island, generally speaking, the more you will distance yourself from the crowds and Pântano do Sul beach is a great option if you want your peace and quiet. Conveniently, it’s also close to a town where you can pop into the little supermarkets or post up with a table, chairs, and sun umbrella to be served a few cold ones and enjoy some fresh seafood from one of the beach front restaurants.

Also in the south of the island is the little town of Armação and the town is blessed with a gorgeous beach of its own. A jaunt over the bridge, however, will take you on a short trail, your reward being the open beach of Matadeiro. Sheltered by jungle-covered hills on all sides, and speckled with enormous rocks on the beach, Matadeiro gives you a special, isolated beach feeling without the hassle.