The Most Beautiful Beaches in Ilha Grande, Rio de Janeiro 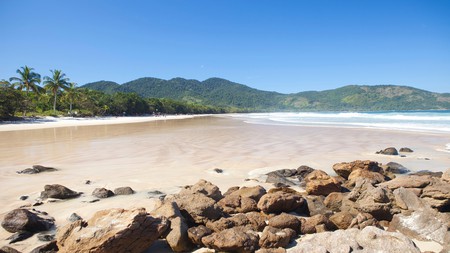 When the late night caipirinha drinking and samba dancing antics in Rio de Janeiro get too much, head to Ilha Grande for an island retreat. Once home to a maximum-security prison that closed in 1994, it has since seen tourism flourish, though development has been slow, meaning the beaches have kept their pristine conditions. Here are some of Ilha Grande’s most beautiful beaches.

Palmas Cove is actually a collection of beaches with tropical names such as Big Beach of Palms, Mengues and Palmas Island. Here, you’re spoilt for choice when it comes to secluded beaches that offer tranquility and soft sands under Brazil’s uplifting sun. The only sign of human life is a few fishermen’s homes and a couple of basic places to eat and drinking spots that cater for local needs, yet welcome tourists too. Electricity runs from generators that are in operation only until 10pm; after that, it’s lights out.

Now an isolated beach free from human development, Parnaioca has a controversial past, having been home to a large slave community that built homes, shops and a church in the area. Nowadays, the 1km (0.62mi) long beach is a natural retreat with no electricity and no hotels nearby. However, it still remains a popular spot on the island due to its serene settings and stunning surroundings. To get to the white sandy shores of Parnaioca, you need to take a boat from Abraão or take the two and a half hour long trek through the forest.

Often voted one of the most beautiful beaches in Brazil, Lopes Mendes is a 3km (1.86mi) stretch of white, fine sand that is fringed with wild vegetation and forests. The shallow crystal clear water is ideal for bathing and the waves further out make a perfect spot for surfers. To get there, take a boat from Abraão, the main town on the island, to Pouso. From there, it’s a 20-minute jungle trek before arriving on the gorgeous shores of Lopes Mendes. 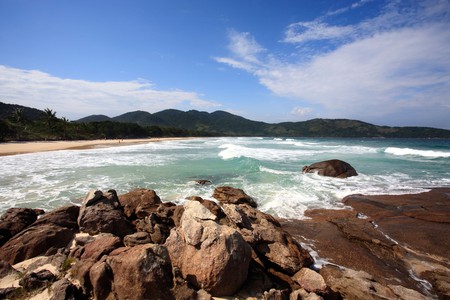 With similar characteristics to Lopes Mendes yet without the high-status name, Santo Antonio is ideal for those looking for a stunning beach setting without the tourist crowds. It’s smaller than Lopes Mendes and the surrounding vegetation seems to close in around the beach, creating a wild, untouched feel. It’s a great spot for surfing – just be wary of the rocks that sit just out of sight from the water’s surface. To get there, follow the same route as you would to Lopes Mendes, yet turn right on the forest trek rather than continue straight on. The path is well-signposted so just keep an eye out for the directions.

The yellow sands and blue-green waters of the Dois Rios beach makes for a pleasant setting for an afternoon of working on getting that sun-kissed glow. Either side of the beach is flanked by a river that runs into the ocean and gives the beach its name of Dois Rios, which translates to Two Rivers. The nearby mangroves that grow in the freshwater of the rivers create a thriving marine ecosystem that is best explored snorkelling. 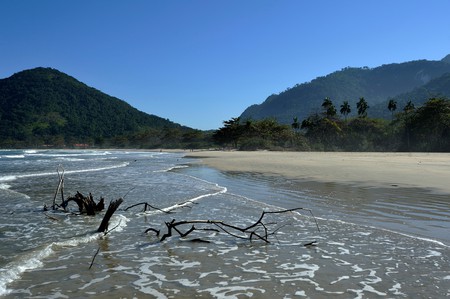 Caxadaço is a tiny 15 metres (49 feet) long, yet with its crystalline waters and surrounding rocky peaks, it still packs in some jaw-dropping beauty. It remains untouched by modern development and the surrounding area is totally inhabited. This is largely due to the difficulty of getting there, which is either by boat or trekking through a dense forest on an overgrown path. The rewards of going there though outweigh the efforts, as it’s a secluded spot of incredible natural beauty with little to no tourists.

This paradisiacal beach has hardly changed the last few decades. The area has no commercial activities nor hotels – just a 600-metre (1,967-feet) stretch of white sand framed by rows of palm trees and a turquoise sea. It is instantly recognisable for the L-shaped palm tree that hangs over the shore. It can only be accessed by boat, a fact that protects the shoreline and keeps it in pristine condition.

The East and South beaches

Undoubtedly, these beaches are the best preserved beaches on the island. The beaches make up a part of a biological reserve created in 1981. This reserve protects the important ecosystems of Rio de Janeiro’s coast and provides a sanctuary for local animals and plants that are endangered or facing extinction. The beaches are untouched and untamed, yet there are not open to visitors unless it’s for scientific research. It is also prohibited to fish, hunt or alter any part of the environment there.