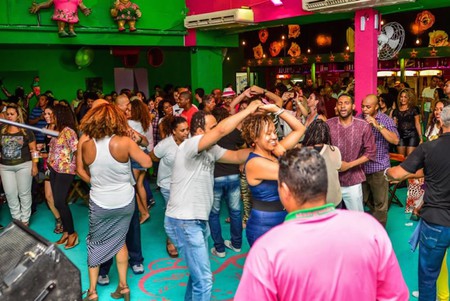 Samba is usually associated with Rio de Janeiro, but São Paulo’s samba roots go way back as well and there’s no shortage of excellent clubs to enjoy this genre in the city. Wear comfortable shoes and loose clothing, so that when your feet and body start to move nothing will get in the way of a good time. Most clubs will give you a comanda, a paper that keeps tabs of drinks and food, so don’t feel obliged to stay in one place. Cover charges depend on the artist performing and the day of the week. Here are some suggestions of samba bars not to be missed in São Paulo.

Decorated with pink and green (in honor of one of Rio de Janeiro’s most famous samba schools, Mangueira), Bar Mangueira is one of the most popular Brazilian music venues in São Paulo. The bar has a stage for musicians, a dance floor and mezzanine for those too shy to show off their moves. Famous samba musicians have performed in the club, including Seu Jorge, Marcelo D2 and samba legends Beth Carvalho and Alcione. On the menu, the classic feijoada is served on Saturday afternoons. 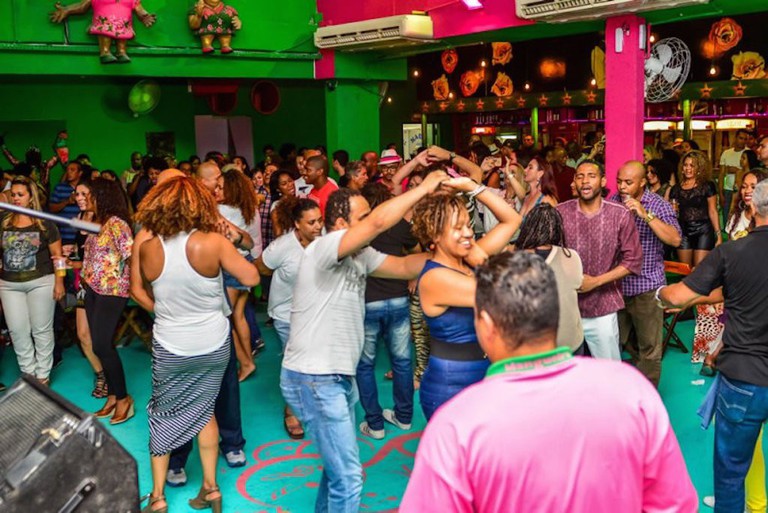 Music Venue, Concert Hall
Facebook
Email
Twitter
Pinterest
Copy link
Share
Map View
A household name in São Paulo’s music scene, the Vila do Samba is one of the best places to hear samba in the city. Located in the Casa Verde neighborhood – known to be the home of São Paulo samba roots – the establishment is very close to the city’s two most famous samba schools, the Rosas de Ouro and Camisa Verde e Branco. The club is part of a small group of townhouses and to reach the main venue where the shows take place, the public must pass through a charming villa. To maintain the peaceful mood among music lovers, Vila do Samba does not allow customers to enter wearing Brazilian football (soccer) team shirts. The establishment has become so popular with samba music lovers that it even has a small school of its own, Feliz Na Vila, whose students parade down neighbourhood streets in the weeks leading up to Carnival. Vila do Samba also features feijoada on Saturdays, happy hour and special events.

Cocktail Bar, Wine, Beer, Cocktails, Brazilian, South American, $$$
Facebook
Email
Twitter
Pinterest
Copy link
Share
Map View
In the heart of São Paulo’s most bohemian samba region lies Traço de União, one of the most traditional samba houses in the city. Visitors are often welcomed with the sound of the cuíca (a small friction drum with a high-pitched sound) and the tambourine. Guest artists and house bands guarantee hours of lively music and dance. The large open area is decorated with the colors of several samba schools, and the establishment is proud to have hosted shows by legendary samba school singers, such as Neguinho da Beija-Flor and Dona Ivone Lara. On Saturdays, the fun begins in the early afternoon with the traditional feijoada served in a ceramic bowl.

This traditional neighbourhood bar is famous for its warm and tropical-inspired environment, with four spacious areas to accommodate the hundreds of music lovers who come in every weekend to hear samba, sertanejo and samba-rock. The Main Hall is perfect for those looking for a calmer evening, with vocal and guitar acts onstage. The Superior Hall is always hopping with full live bands, making it impossible for anyone to remain seated for very long. It also claims to be one of the best places to drink caipirinhas in São Paulo, and during happy hour the bar offers two-for-one beers.

Due to the fact that many great samba performers are devotees of Saint George, the warrior saint, the owners christened this beloved club with his name. But regardless of your religion or devotion Estação São Jorge is a great place to try out your samba steps, or just stay in the second floor balcony watching samba dancers do their magic. Bottles of cold beer are served at the table in large copper pails filled with ice, and like any traditional Brazilian restaurant, there is the feijoada buffet on Saturday afternoon. In addition to regular guest artists, Estação São Jorge also promotes a few Samba de Roda, impromptu jamming sessions with samba musicians, throughout the month. In these sessions, old-timers and young apprentices play everything from traditional samba to newer songs and even their own compositions. 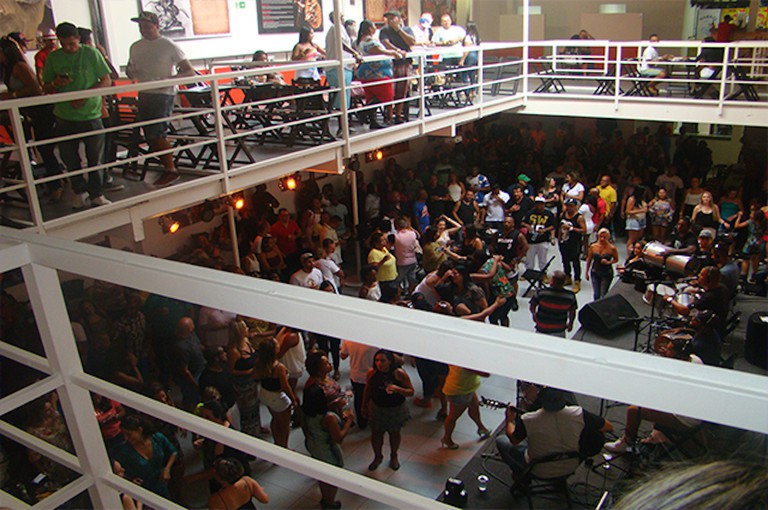