The Best Places to Go Whale-Watching in Brazil 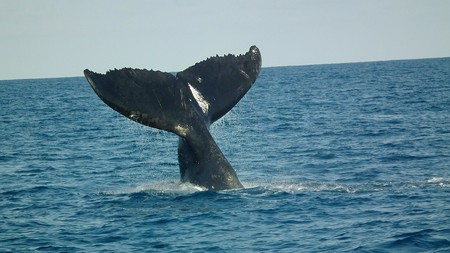 Whale-watching is a majestic experience. To see the world’s largest mammals swimming past and frolicking in the sea is a spectacle that most people never forget. As whales regularly migrate up Brazil’s coast from the Antarctic, there are certain places during the year when glimpsing them is relatively straightforward. Here’s where to find them.

Itapirubá Norte beach in Santa Caterina is at the center of a 130km stretch of water off Brazil’s coast that is protected for the migrating whales. The Projeto Baleia Franca (Right Whale Project) runs headquarters overlooking coves where the whales congregate and has a visiting area, observation deck, research rooms and labs. There used to be close to 100,000 southern right whales, but today their population is closer to 10,000.

A post shared by Instituto Baleia Franca (@institutobaleiafranca) on Jan 17, 2017 at 5:04am PST

Praia do Rosa one of Brazil’s most beautiful beaches. The curved bay of warm water and gentle waves is as popular among returning right whales (Baleia Franca) as it is with tourists. Between July and November, southern rights return to Santa Catarina to breed, calf and raise their young. They often swim close enough to the cliffs for people to watch and photograph them. Resorts and tour operators take boat trips to find them at sea too. The whales are fully protected and strict rules regulate how tours operate.

The whale-watching trips that can be booked in Garopaba are among the best. The right whales – which can reach up to 18 meters long – pass by many of the surrounding beaches (Garopaba, Silveira, Ferrugem, Gamboa, Siriú and Ouvidor) close to the shore, often with calf by their side, staying nearby for the first few months of their babies’ lives. The optimum time to see the whales is from mid-August to mid-October.

The name Abrolhos is thought to come from the cry “open your eyes” (“abre os olhos”) as sailors approached land and shallow waters. On one island of the Abrolhos Archipelago is the Parque Nacional Marinho de Abrolhos – Brazil’s first marine park. It is surrounded by dazzling waters with multicolored coral and fish which are a paradise for divers. From June until October they also provide a warm resting spot for migrating humpback whales (Jubarte in Portuguese).

Just north of Bahia’s capital, Salvador, is Praia do Forte. It is an upmarket, well-kept beach town that has not only great surfing but a turtle rescue programme, TAMAR, and a good chance of spotting some visiting humpback whales between July and November. Schooners leave the beach on whale-watching tours almost every day, or you can take a plane tour and spot the whales from the air.

Whale-watching boats leave from Praia da Concha in Itacaré, south of Salvador, when the tide and weather permits and the whales are in situ. After a short lesson in the whales’ migration patterns, life-cycle and habits, you head off in search of the humpback whales that have come from the Antarctic to breed. Brazil’s coastline provides an ideal nursery for their young before the families return to the south in November.

Fernando de Noronha is an archipelago over 200 miles off Brazil’s most easterly point. Tourism to the islands is limited and the wildlife and marine life are fiercely protected. As well as the humpback whales that can be seen from Brazil’s mainland, short-finned pilot whales and melon-headed whales also pass by. Two types of dolphin, the spinner and the pan-tropical, often play around in its surrounding waters too.