The Best Places to Go Kitesurfing in Brazil 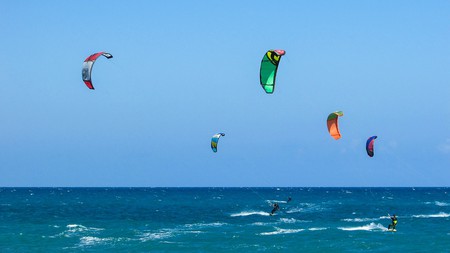 Brazil‘s Atlantic coast has nine months of reliable wind, weather and waves, making it perfect for kitesurfers in search of adventure. If you’re after that cult combination of technical know-how, physical exertion and ultimate freedom of nipping along the waves, take a look at our list of the country’s top kiting spots.

Kite and windsurfers have had a hand in putting Jericoacoara on the map and helping it become the tourist hub it is today – until the 1980s it was a undisturbed fishing hamlet. These days backpackers and honeymooners, as well as surfers and boarders arrive year-round. The kiting on Jeri’s own beach has its limitations and can be busy with others on the water. Preá, however is just 15km (9.3 miles) down the coast. The beach there offers some of the country’s best kitesurfing, as well a large school.

Barra Grande in Piauí (not Bahia) is an emerging kiting destination. As it is 250km (155 miles) west of Jericoacoara (which is challenging enough to get to in its own right), reaching this sleepy town takes time and effort. For serious kiters, however, it is worth it. The conditions – a constant wind of 18-28 knots, soft sand beaches and seawater lagoons – give good kiting for beginners as well as enough to entertain the pros too.

On top of a well-deserved reputation as a top kiting resort, Cumbuco also has convenience in its favour. A mere 30 minutes from Fortaleza, you can hop off an international flight and be on the beach in no time at all. The infrastructure around is well developed and its a social place so expect plenty of fellow kiters, kit shops, course and schools, as well as permanently blowing wind and idyllic sea lagoons.

Most of Brazil’s best kitesurfing beaches are in the country’s north-east, but visitors to Rio de Janeiro can take to the waves too. Barra da Tijuca, a 17 km (10.6 mile) stretch of sand in the city’s west zone, has a cloud of kites fluttering out at sea on weekends and holidays. It is easily reached by taxi from Ipanema or Copacabana – when you arrive, a couple of barracas, like K07 and Kite Point Rio, along the beach rent kit and give instruction if you need it.

From November to January, the water off São Miguel do Gostoso in Rio Grande do Norte is thick with kitesurfers. The laid-back little town is rustic though well-connected and has four main beaches that all offer something different. The main bay is flat and sandy, with clear shallows at low tide. Others have plenty of wave-riding and jump opportunities in the peak season.

Icaraizinho (‘little Icaraí do Amontada’)’s six kilometres (3.7 miles) of beach receive almost perfect kiting conditions that, coupled with the peace and emptiness of the area, attract riders who want to get out on the waves by day and take it truly easy in the evenings. The wind blows up to 30 knots, getting stronger and more blustery in the afternoons. There are flat areas to the south and plenty of bumps and jumps heading north, as well as lesser-known beaches to be discovered.

For the wave junkies, Taiba is the place to go. It is another small fishing village on the coast north of Fortaleza with waves that reach up to two metres (6.6 feet) high. Serious boarders flock to the bay to practice their tricks, while flat-water riders head to the lagoon. It is less well known than other spots so tends to be less crowded as well as postcard perfect.