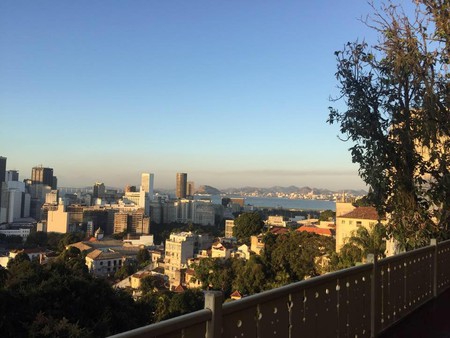 Lively hilltop Santa Teresa district is home to some of the best hostels in Brazil’s most beautiful city, Rio de Janeiro – book yours via Culture Trip.

To enjoy the best of Rio, it can help to stay a little way beyond. That way you get the swoon-worthy views of both city and ocean, and you’ll have samba-fuelled nightlife more or less on your doorstep. We love the lofty, timewarped neighbourhood of Santa Teresa, where accommodation is affordable and bars plentiful. The edgy nightlife of Lapa district is no distance at all by cab, and metro links serve both city and beaches. Pick one, or more, of the best hostels in the area and you’ll have the Rio deal. 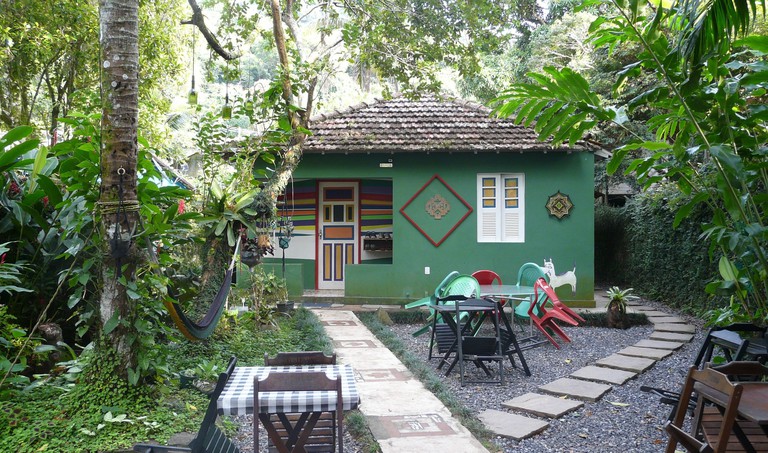 © Mambembe / Expedia
It’s perfectly positioned for nightlife – a five-minutes drive to Lapa’s samba clubs, and Santa Teresa’s busiest bars lie on the doorstep – which explains why this Santa Teresa hostel attracts a party crowd. There’s an in-house bar with live music, where local musicians play most nights, and plenty of lounge space for socialising. Even if the emphasis is on staying up rather than sleeping, the mixed dorms do have privacy curtains for the bunks. There are doubles too – all are modestly decorated and furnished and some have Rio skyline views. 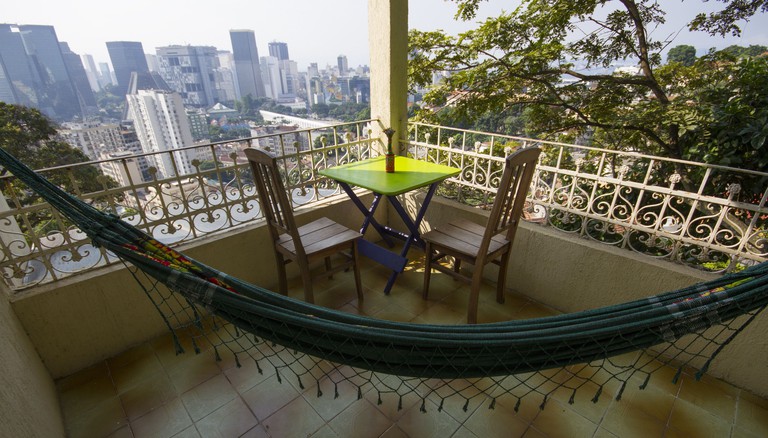 © Rio Forest / Expedia
Rio Forest is a glampacker hostel occupying a large 1920s mansion on a quiet street in the shadow of the Chácara do Céu museum, home to European and Brazilian art. This is a hostel with benefits like a pool, breakfast included and over-the-treeline Rio views from some rooms and dorms. Marmoset monkeys and toucans trill in the garden, while all dorms and rooms are en suite, with attractive stenciled art of Rio. Some have floor-to-ceiling windows opening onto small balconies, and there’s a semi-al fresco bar-restaurant with live music most nights. 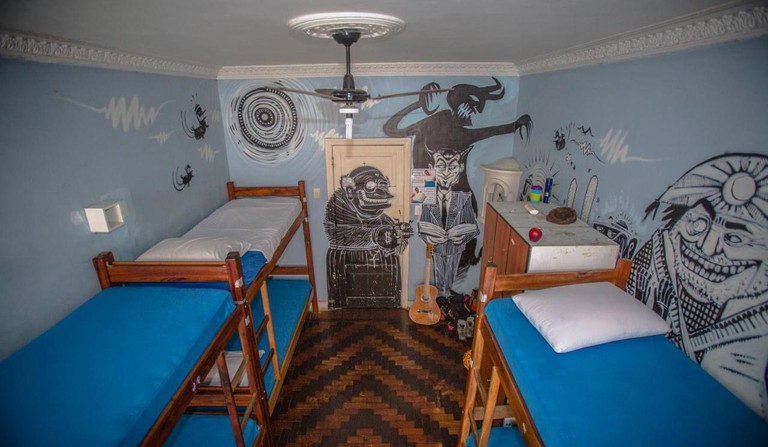 © Books / Booking.com
With Lapa’s clubs a stroll from the in-house bar, Books is a great place to party pretty much any hour of the day or night. Few guests are here to sleep in the mixed and sex-segregated dorms – which are simple wooden-bunk affairs, with lockers and windows that permit plenty of ventilation. For the morning after the party the night before – if you’re not too hungover to make it to the beach – Cinelândia metro station is a 10-minute walk away. If you are, there’s a bean-bag-strewn recuperation lounge with a video library. 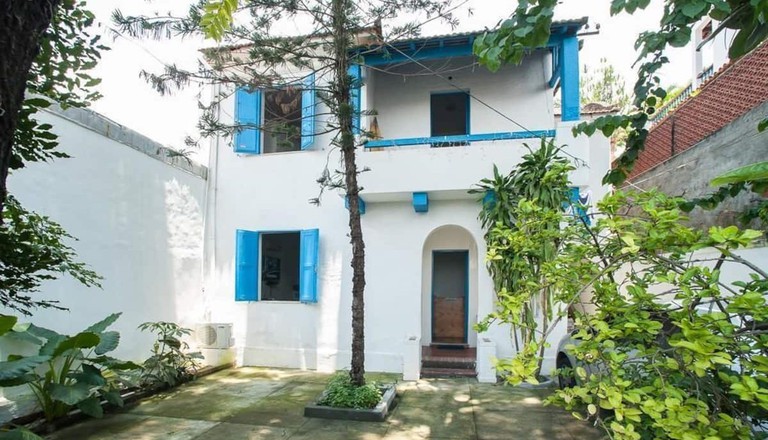 © Orient Express Santa / Expedia
In a classic whitewashed, blue-shuttered 1920s Santa Teresa townhouse, this quiet, simple hostel benefits from a good location – right next to the tramway that runs between Santa Teresa and the city center, and a five-minutes walk from the restaurants around Largo das Neves square. Mixed and sex-segregated dorms and rooms with en suites are simple, furnished with beds and lockers. They overlook an appealing patio garden dotted with breakfast tables, and visited by marmoset monkeys in the mornings. 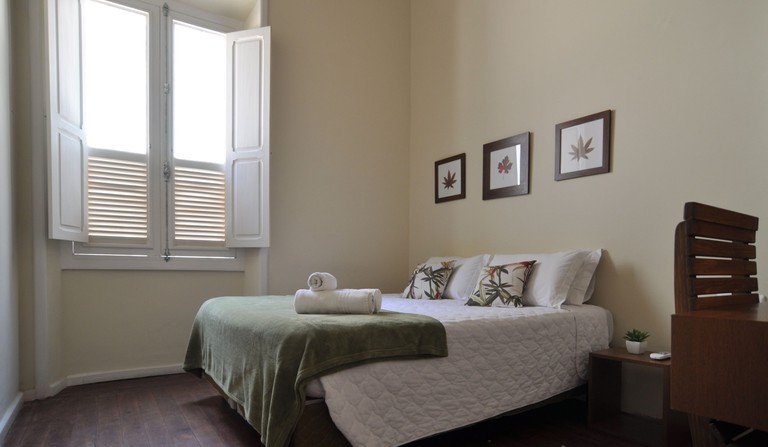 © Bossa / Expedia
It’s worth splashing-out on an upstairs balcony room in this upmarket hostel – for the sweeping view of the glass skyscrapers of downtown Rio, and distant Guanabara Bay. Mixed and single-sex dorms on the same floor share the view through small windows, and are fitted with with privacy curtains and large lockers. Stairs wind through the hostel’s tree-filled garden to a patio speckled with sun loungers and slung with hammocks. When it’s raining head indoors for the games room and socialising in the spacious communal lounge. 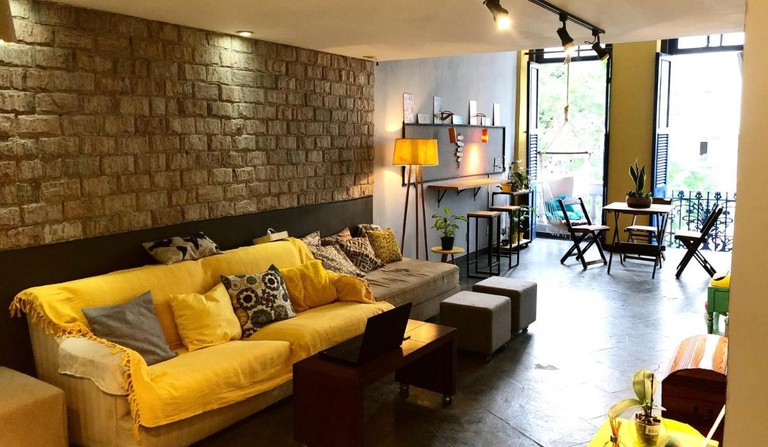 © Por El Mundo / Booking.com
In Lapa, just down the hill from Santa Teresa, Por El Mundo is well-positioned for Rio’s lively weekend nightlife. Beco do Rato alley, where the weekend samba parties begin, is just outside the front door. Countless bars, cafes and restaurants enliven the surrounding streets. The metro – for the beaches – is a just a few hundred yards away. The setting is agreeable, in a converted town house with Juliet balconies and wall-to-ceiling shutter-windows. Dorms and doubles come as beds-and-lockers-only, but there’s a large communal lounge. 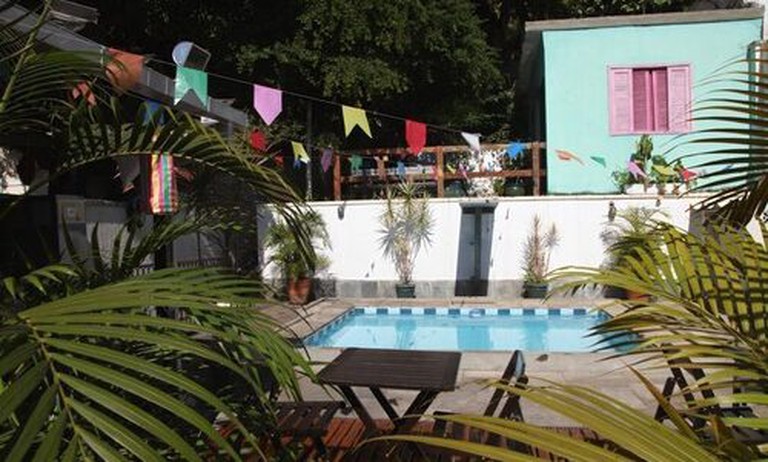 © Rio Hostel / Expedia
Tick boxes for a pool and sundeck, a bar, breakfasts included and Rio city center views from the leafy garden. Rio Hostel certainly has plenty going for it. It has the benefit of a good location too, with an easy stroll from the restaurants around the Largo do Guimarães in the heart of Santa Teresa, as well as being a handy spot for the local tramway and taxis. Lapa is a five-minute drive from the door when you want to live it up of an evening. Dorms are simple – with little more than bunks and lockers. Doubles come with en suites, some with skyline views.

Book your stay in one of the best hotels and best resorts in Brazil now with Culture Trip. For more to do in Rio, experience nature with some incredible outdoor tours, then unwind with the best Brazillian desserts.

This is an updated rewrite of an article originally written by Sarah Brown.