Casa da Cachaça |©Alexandre Macieira | Riotur|Flickr
The social scene in Rio de Janeiro often finds itself centred on the country’s most representative liquor – cachaça. Made from distilled sugarcane juice, cachaça potency is coupled with a sweet, pleasant aftertaste, depending on the quality. No trip to Rio de Janeiro is complete without trying it. Check out some of these, the best cachaça bars in the city.

Located in the heart of Lapa, Casa da Cachaça – sometimes known as Bar Cachaça – has retained its same basic style since it was founded in the 1960s. The bar itself is tiny; most people lean against the counter whilst the rest hover around inside or jostle for space on the pavement outside. Yet it’s not the ambiance that keeps the clients coming back for more; it’s the more than 100 brands of cachaça that is the main draw. Having carved out its groove as a specialist, the bar remains one of the best cachaça spots in town. Try the Gabriella for its sweet taste and cinnamon kick.

One of the stars in the Carioca (anything born or made in Rio) world of cachaça, Academia da Cachaça has a thriving branch in Leblon where it draws in the wealthy locals and curious travellers. It also has an equally successful branch in Barra da Tijuca, a cosmopolitan neighbourhood that lies just outside the usual tourist hotspots. The cachaça here is the main appeal where it is served pure, in smooth caipirinhas, or deliciously creative cocktails. The food is also great quality and the Feijoada is considered one of the best in town. 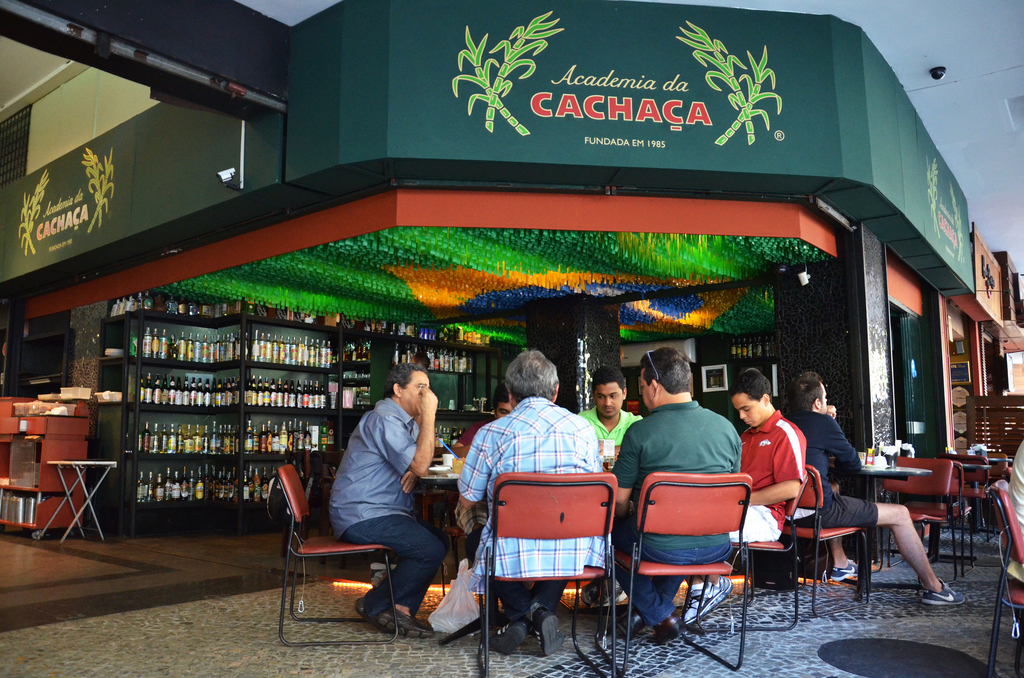 The casual style and live music set the scene for a laid back, memorable night at the Cachaçaria Mangue Seco bar. It has a diverse selection of cachaças that range from silver to gold, the latter having been aged in wooden barrels much longer to give it a distinct taste. Guests can drink the cachaça pure or mixed in caipirinhas and enjoy with the seafood options and typical Brazilian snacks on the menu.

Bar, Pub Grub, $$$
The most traditional and beloved bar in Santa Teresa, Bar do Mineiro is famed for its hearty Feijoada, bean pastels, and of course, its wonderful selection of cachaça. The venue hosts more than 20 different brands of cachaça, many of which are locally-brewed. Ask to try the ones that are made in nearby Paraty; it’s a small colonial town in the state of Rio de Janeiro that is known for its established cachaça distilleries. Enjoying the cachaça pure is certainly doable, yet at Bar do Mineiro, the real joy on their drinks menu is their smooth, tasty caipirinhas.
More Info
Open In Google Maps
99 Rua Paschoal Carlos Magno, Santa Teresa Rio de Janeiro, 20240-290, Brazil
+552122219227
View menu
Visit website
Visit Facebook page
Send an Email
Give us feedback

Cafe, Brazilian, Coffee, Tea , Fast Food, $$$
Located in the Centro in an off-the-beaten path, Cafe do Bom, Cachaça da Boa blurs the line between cafe and bar with its daytime breakfast and brunch menu mixed with bar snacks and cachaça-infused drinks. Here is the best place to drink cachaça pure thanks to the large collection of spirits available – there’s over 90 brands of cachaça here. Order a cachaça on the rocks and enjoy with some traditional Brazilian bar snacks.
More Info
Open In Google Maps
10 Rua da Carioca, Centro Rio de Janeiro, 20050-008, Brazil
+552125091018
View menu
Visit website
Visit Facebook page
Send an Email
Give us feedback

Restaurant, Brazilian, Portuguese, Vegetarian, $$$
With a stock of quality cachaças to choose from, guests will be spoilt for choice between pure cachaça served over ice or mixed flawlessly to make a smooth caipirinha. Joaquina Bar is decorated with a style that reflects the imperial era of Brazil and sports a typically Brazilian food menu that combines quality ingredients into delicious main courses and snacks. Go during the week if you want a chilled lunch or head there on the weekend nights to enjoy an animated atmosphere.
More Info
Open In Google Maps
448 Rua Voluntários da Pátria, Botafogo Rio de Janeiro, 22270-010, Brazil
+552125352774
View menu
Visit website
Visit Facebook page
Send an Email
Give us feedback