The Art Of Ernesto Neto: A Trip Into The Ludic 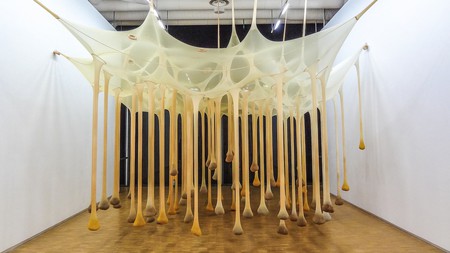 Brazilian artist Ernesto Neto uses transparent, stretchy material, styrofoam pellets and pungent spices to create his installations of soft, biomorphic sculptures. Although often considered minimalist, his works differ from those of artists working in this tradition through their interactive, and intense olfactory quality. 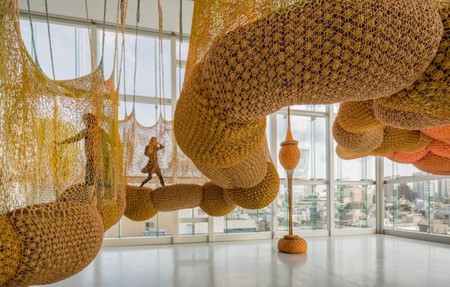 Ernesto Neto was born in Rio de Janeiro, Brazil: a city of undeniable beauty, where nature and urban development have been forced to mingle by the powerful hand of real estate exploitation. This duality between nature and construction is a bewildering feature in Rio. It only becomes obvious when you examine everyday life in the city, get to know its people, walk on its wavy-looking sidewalks or listen to the sweet rhythm of samba. Ernesto Neto’s art is the same; his works are a combination of ephemeral environments inspired by nature, knitted by men and assembled as art. It is stunning to our eyes, but must be completely experienced: walked into, perceived, scented…
Neto is from a generation of Brazilian artists that witnessed the more liberal approach to art that arose during the 1950s and 1960s. Important figures of this period such as Lygia Clark, Helio Oiticica and Cildo Meireles became known as Neo-Concretists and altered the way that the spectator interactively engaged with the artwork. In Clark’s propositions, the name given to her ephemeral performances, she gave up control of the artistic process to free the observer’s experience, whose body and actions became part of the artwork. This same sparkle of openness guides Neto’s art. 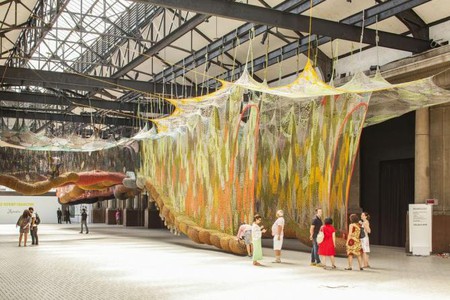 Most of his sculptural environments are site-specific crocheted nets and cocoons, sewed with nylon, and often carrying surprising substances. Aromatic spices, candies, sand and colorful Styrofoam balls are stuffed into these nets creating pendulous sculptures that fall like raindrops from the ceiling. Other times Neto creates human-scale spaces that appear almost primitive. He works with transparent materials and unusual textures, attending to both the inside and outside of the sculptures. The resulting shelters or vessels, unlike conventional architecture, are meant to be experienced as nature: his materials beg to be touched.

For Bicho SusPenso na PaisaGen (2012), installed at Leopoldina Station in Rio, Neto created a suspended structure that floats above its viewers. This multi-colored crocheted net is so spread throughout the space that it takes a while for the viewer to discern its entire length. Two main corridors in the installation invite the viewer to become an active visitor. The transparent textured passageways that float a few feet above the floor guide the curious participant to higher enclosed rooms to discover smaller environments also made of styrofoam filled crochet sacks that you can stand on top of and look down. 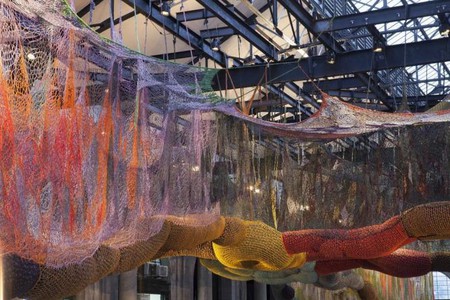 After adventuring inside of those bouncing spaces and back to the ground, you can take a last memento of the piece by grabbing candy from the crochet sacks, which gently cling below the corridors’ nets. Neto named this environment as Bicho, or creature, beast. The term is often used in contemporary art after Clark’s folding sculptures, which are so mutable and unpredictable that they possess an animal quality.

Neto learned crocheting with his grandmother and great aunt and has since used it not only aesthetically, but also to convey intimacy. He takes the apparently fragile sewed threads to the edge of their physical capacity by stretching and extending them, shaping the works piece-by-piece, intuitively, like a spider builds her web. Yet, unlike the spider, his embrace is not meant to harm, nor even to trap the viewer in conceptual riddles, but is Neto’s way of proposing an encounter with your inner self. Part of his success comes from his ability to produce sensations that are not usually found in our adult, urban lives. It is an art that asks the viewer to slow-down, walk gently, and feel the delicate instability of his filled nets. Ludic, and humble, experiencing his pieces makes us notice our own body and how it responds to different spaces. We think, How do I manage to stand, to climb, to balance, how do I find my way through this complex net? 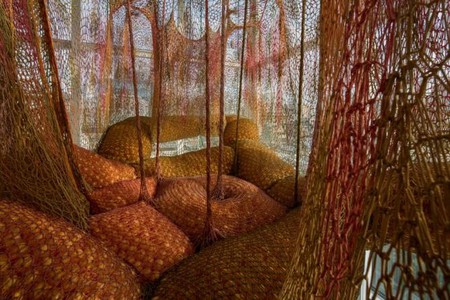 Neto does not load his pieces with academic or social subtexts. He keeps them purposely open for the viewer to interact with them: the final component of the piece is you and your own conscious limitations. In an interview Neto said about his art, ‘When there are people around it behaves, but when it’s alone…it becomes tricky!’ As he suggests, his pieces acquire a life of their own; they change, adapting to the multiple moments of interaction with their visitors. For all of these reasons, Neto’s works are not just soft-sculpture, not only mere fun adult-playgrounds, but represent your experience of a moment, an idea of landscape, a dream, a symphony, a noise, an impulse, a feeling, an enigma meant to be sensed in the flesh.
Enesto Neto lives and works in Rio de Janeiro, where he graduated from the School of Visual Arts of Parque Lage. His works have been exhibited in numerous cities around the world. His work Navadenga (2010) was on view at the Museum of Modern Art, New York, in 2010. He has participated of two Venice Biennales, 2001 and 2003, and in the Biennial of Sharjah in the UAE. Recent solo exhibitions include Bicho SusPenso na PaisaGen, Leopoldina Station, Rio de Janeiro, 2012 and Cuddle on the Tightrope at the Sculpture Center of Nasher in Dallas, USA, 2012. Other important solo exhibitions include: Edges of the World, Hayward Gallery, London, 2010; Dengo, Museum of Modern Art of São Paulo, Brazil, 2010 and 30x Bienal – Transformations in Brazilian Art, Sao Paulo.