Censiv Motel São Paulo | © Censiv Motel
While in the United States, motels are usually on the side of highways, and cater to the weary traveler, motels in Brazil are geared towards couples who want to get away and have a romantic night or an afternoon fling. Motels in Brazil are geared toward those who want to have a private, luxurious place for sex. Here are seven of the best love motels in São Paulo.

This love motel does not look like a typical Brazilian motel, but rather a hotel room in New York. Nonetheless, couples here pay for a three- to four-hour period, and the objective is not to rest. Lavishly decorated, its suites have chromo therapy showers, and some even a sauna, hot tub and a pool with a small waterfall. 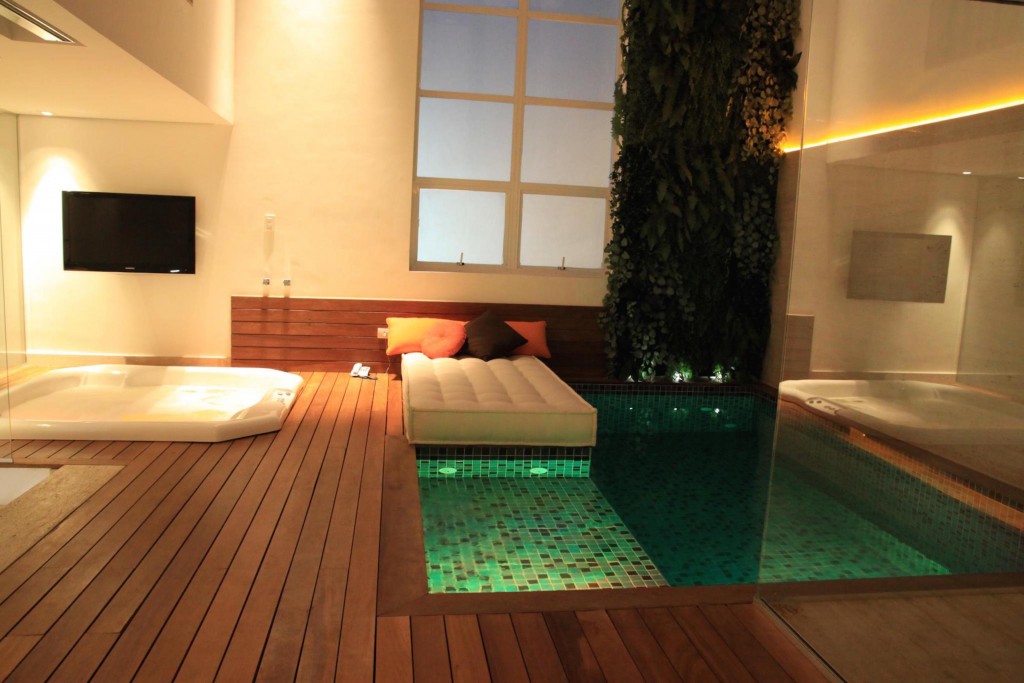 Considered the first boutique motel in Brazil, Lush has operated in São Paulo for more than 25 years. Each of its rooms is individually decorated and the motel boasts it has services as good as premium hotels around the city, including gourmet menu, imported beers and a wine cellar for its clients. Some suites are equipped with 4D cinema TVs, with popcorn as a house courtesy.

Motel
Located across from São Paulo’s most famous cable-stayed bridges, couples get to see one of the most beautiful sceneries of the city. Many of the rooms are equipped to handle swing parties, with pole dance railing and showers big enough to handle groups. Also available are rooms for wheelchair users.
More Info
Open In Google Maps
430 Avenida Duquesa de Goiás, Vila Tramontano São Paulo, 05686-002, Brazil
+551137583324
View menu
Visit website
Visit Facebook page
Send an Email
Give us feedback

Motel
One of the most popular boutique motels in the city, Acaso has 55 suites each uniquely decorated with a different theme. The most expensive rooms are equipped with a panoramic sauna, large whirlpool and a sunroof.
More Info
Open In Google Maps
6190 Avenida Salim Farah Maluf, Vila Prudente São Paulo, 03157-201, Brazil
+551120211695
View menu
Visit website
Visit Facebook page
Send an Email
Give us feedback

Motel
L'Essence Motel SP | © L'Essence
Located near the University of São Paulo (USP) the motel is particularly popular with the students. The establishment, however, boasts a menu exclusively prepared by a chef and its suites equipped with the latest technological gadgets to make any stay an experience to remember. One difference which stands out from other motels in São Paulo is that the L’Essence has an exclusive entrance for pedestrians, so a car is not, as in most cases, a “requirement” to enter the motel.
More Info
Open In Google Maps
600 Avenida Torres de Oliveira, Jaguaré São Paulo, 05347-020, Brazil
+551137653160
View menu
Visit website
Visit Facebook page
Send an Email
Give us feedback

Motel
Eros Suite at Zapt Motel SP | © Zapt Motel
Located in one of the less touristy neighborhoods of São Paulo, the Zapt motel offers several themed suites. The Solarium Eros Suite, for example, is for those who want to spice up their sex life and has a bed with handcuffs, mirror in the ceiling, erotic scale, two showers, a Jacuzzi and a solarium. Depending on the suite and the time of day you enter the motel, the establishment has courtesy breakfast, executive lunch or afternoon tea.
More Info
Open In Google Maps
680 Rua Capitão Pacheco e Chaves, Vila Prudente São Paulo, 03126-001, Brazil
+551120634280
View menu
Visit website
Visit Facebook page
Send an Email
Give us feedback
Give us feedback