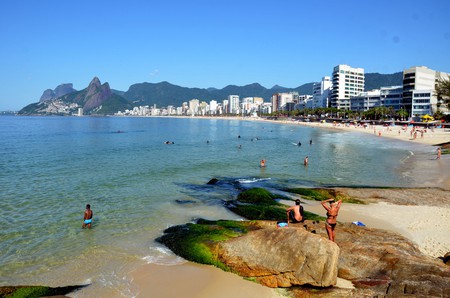 Some of Rio de Janeiro’s more famous, lively beaches are right next to Rio’s trendiest neighborhoods, while others are perfect for a secluded getaway. We round up seven of Rio’s most stunning beaches, listed in order of east to west along its shoreline.

With Pão de Açúcar (Sugarloaf) as its backdrop and Morro da Urca (Hill of Urca) at its side, this beach oozes charm and natural beauty with plenty of luscious palms and other exotic vegetation growing nearby. This colorful beach is small and compact yet never becomes too crowded. Surrounding rocky platforms and caves turn the sea into a bay, making it popular for canoeing and stand-up surf paddling thanks to its calm and peaceful waters. Others are happy just to grab a cool coconut to drink and take in the view. 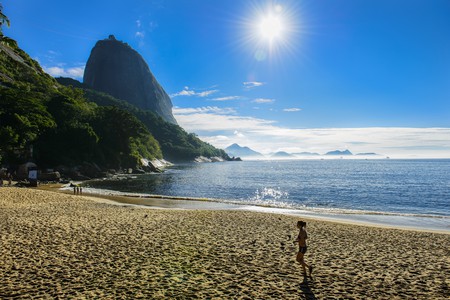 Being one of the world’s most sought after beaches means the Copacabana is chockablock with hotels, restaurants and beach-side kiosks to cater to the annual mass wave of tourists flocking in. Weekends can get crowded on sunny days, and local visitors and tourists often find themselves jostling for space at peak season. However, the energetic atmosphere is contagious, and with various live samba acts playing on Copacabana’s wave-patterned promenade, this beach brings life and music to all its visitors. Sports along the eight-kilometer stretch are a permanent fixture with football, volley, surfing and beach tennis being the most popular among locals.

Arpoador is tucked in at the far end of Ipanema Beach, and its rolling waves make it perfect for beginner and experienced surfers alike. There are many beach kiosks that offer surf lessons, with the majority of instructors speaking English and patient and welcoming in true Brazilian style. It’s a perfect way to embrace the Carioca lifestyle. This beach is famous for its spectacular sunsets, so take a seat among the other beachgoers on Arpoador Rock and make sure to join in with the unified cheers and claps as the last of the sun’s rays disappear behind the jagged peaks of the Dois Irmãos (Two Brothers).

The ‘Secret Beach’ can only be reached by hiking along a trail that is relatively easy going, yet not well signposted, thanks to local efforts to maintain its location a secret. The beach is probably better defined as a natural pool created by the waves that lap into a ridge between the rocks. Take a dip in the salty, shallow pool and drift away into the surrounding natural calmness.

Wide waves with heights of up to three meters make Prainha a sweet spot for the more advanced surfers who arrive at the crack of dawn and only leave when either the waves dry up, or the sun goes down. However, it also attracts the beachgoers who are happy lounging on white sands with clear waters and a strikingly expansive skyline. Prainha sits at the edge of the Atlantic Forest which harbors incredible biological diversity on par with the Amazon and is considered a nature reserve that is fiercely protected by activists and other interest groups. 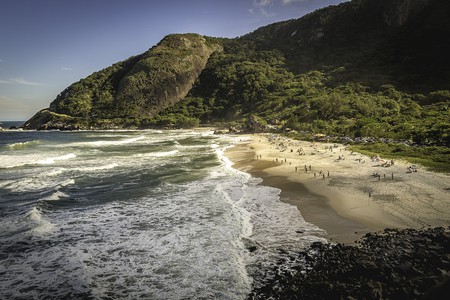 Difficult to get to for those without cars and protected by thick vegetation and large rocks, it’s not difficult to see why Praia de Abricó has become Rio de Janeiro’s only nudist beach. The beach was officially declared a nudist beach in the 1990s, and since then, kiosks have popped up providing beach snacks and cooling drinks to the increasing number of nudist beachgoers. The beach is regulated by the ANABRICO (The Naturist Association of Abricó), which placed a list of rules of conduct at the beach entrance; they also keep watch of the beach to ensure the privacy of nudists and to maintain peace. Feel free to join in a game of volley, and just remember to take the sun cream. 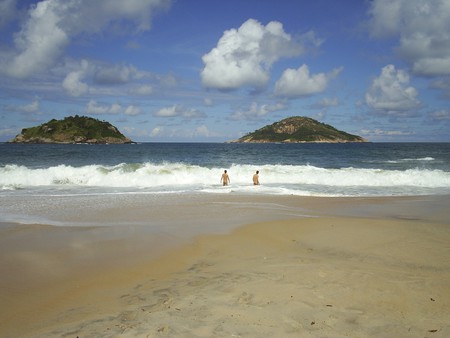 Nestled in the wild and thriving Atlantic Forest, it’s all too easy to imagine being back in time in this idyllic natural retreat where the crescent of the sandy beach is framed by wild rows of looming trees. Families tend to favor this beach for its calm waters and plenty of space for children and young tots; however, it is a perfect sanctuary for anyone wanting to take a time out and relax away from the city. Shops and beach vendors are hard to come by, so make sure you bring food, drinks, and other provisions.