The 11 Most Famous Street Artists from São Paulo 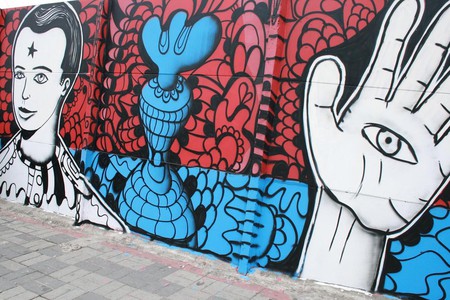 Known as one of the most vibrant street art scenes in South America, São Paulo has produced great graffiti artists who have left their mark not only in the city but throughout the world. With neighborhoods such as Cambuci and Vila Madalena leading the way, São Paulo has become an outdoor art museum, with alleyways as well as big avenues increasingly attracting more and more visitors who come to the city just to see this type of cultural expression. Below are some of the best graffiti artists from São Paulo.

Two of the most famous graffiti artists in Brazil are from São Paulo. They are the twins Gustavo and Otavio Pandolfo, better known to the rest of the world as OsGemeos. The two started out painting the walls of their neighborhood, Cambuci, in the 1980s before heading off to do street art in Spain, England, the U.S. and Germany. 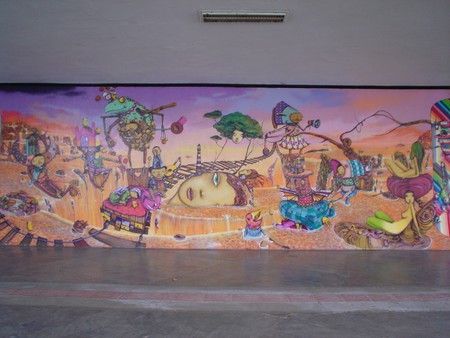 Amaral is one of the pioneers of the Brazilian graffiti movement, but also works with animation, web-art and installations. He was chosen to be one of the artists to paint one of the animals in São Paulo’s cow parade in 2005. In addition the graffiti artist also has several large panels in some of the busiest parts of the city, with thousands seeing his work everyday. 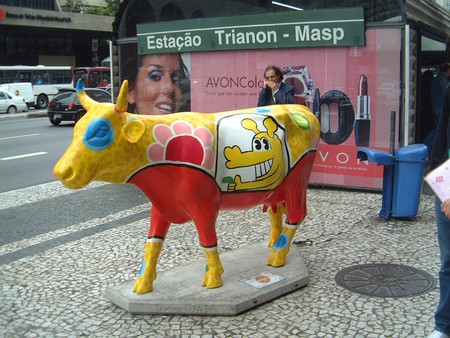 Binho Ribeiro has a solid career as a graffiti artist, being the founder and curator of three editions of the Bienal Graffiti Fine Arts. As a pioneer of street art in Latin America, the artist has his work displayed in cities around the world, like Paris, Beijing and Amsterdam. He has also lent his graffiti work to large ad campaigns by Sony and Ferrari. 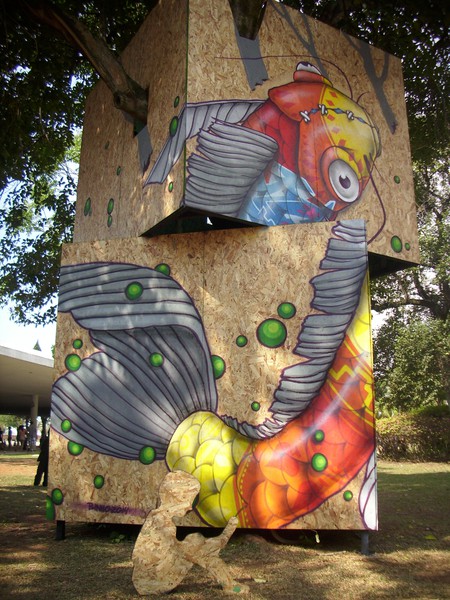 The designs of São Paulo native, Eduardo Kobra, or just Kobra to his fans, were never modest or small. Kobra’s kaleidoscope figures are his signature and embellish many neighborhoods in São Paulo. For the 2016 Olympics, the Rio de Janeiro government asked Kobra to paint four large panels in one of the most visited parts of the city, the Olympic Boulevard. The artist took it upon himself to depict all races into the four figures. The result was astounding, becoming one of the symbols of the Rio 2016 Olympic and Paralympic Games. 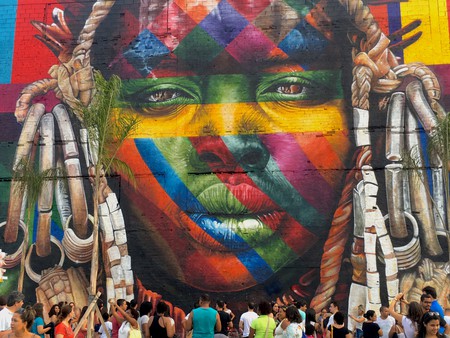 Alex Senna, differently from most of his graffiti colleagues, does not depict social movements or concerns with his work. Instead he focuses on love and relationships. His work – predominately black and white – has a romantic feel to it, leading the viewer back to a simpler time when friendship and closeness were highly regarded attributes. 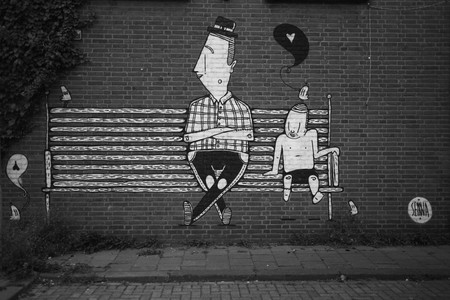 The artist today known as Zezão started his graffiti career in underground and abandoned spaces, such as sewers and water treatment centers; places where other graffiti artists did not go. Today, recognized as one of São Paulo’s best, he is invited to paint the walls of museums and art galleries. His signature graffiti – usually in blue – is an intricate design of Arabesque figures which move along the “canvas” in waves. 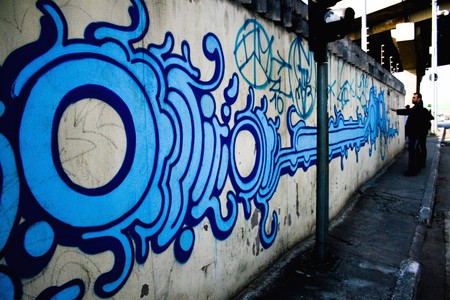 Speto once said his graffiti was influenced by the hip-hop culture of the 1980s in São Paulo. Like his colleague Alex Senna, the artist seems to have a preference for human figures in black and white. His work can be seen in several museums and art galleries around the world as well as some ad campaigns. 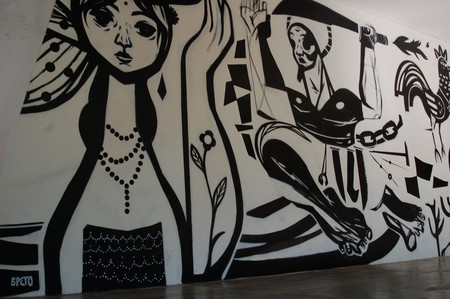 Heavily basing his graffiti on social criticism, Cranio uses his drawings to show oppression placed on the indigenous populations of Brazil. The artist, who is a professed fan of Spanish painter Salvador Dalí, has shared wall space with São Paulo’s finest graffiti artists, such as OsGemeos and Nina Pandolfo. 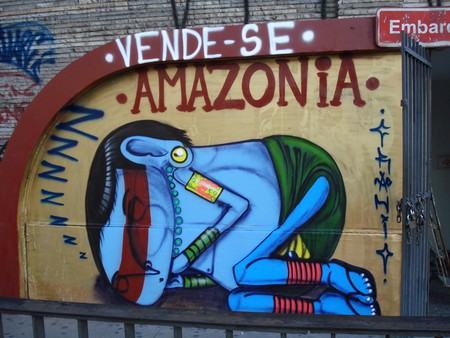 São Paulo native Alex Hornest started out as a painter and a sculptor, but in the 1980s decided to start experimenting with graffiti. From there Onesto (his graffiti name) was born. According to Hornest, with his graffiti he tries to debate the link between urban residents and their cities. The artist has shown his work in many cities around the world, like New York, Bogota and San Francisco, trying to conjure up a discussion about the reality of the large metropolitan areas. 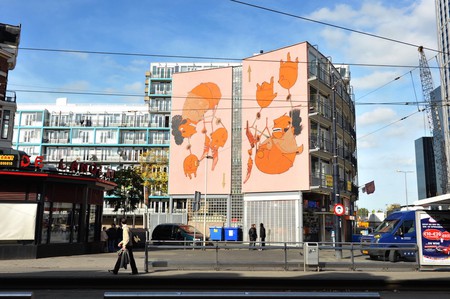 One of the few female graffiti artists from São Paulo to make a name for herself outside Brazil, Nina Pandolfo has a distinct way of portraying women in her works. The delicate traces of the figures, with their almost angelic faces, has won fans in far away places like Sweden, Scotland and Los Angeles. 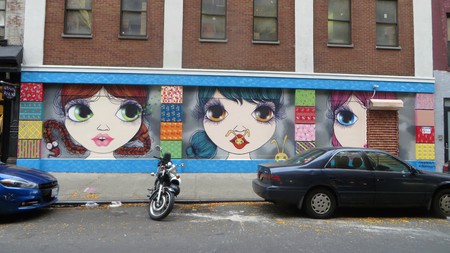 One cannot stroll through São Paulo’s historic center without noticing the enormous drawing of a woman on the side of a building in Avenida Tiradentes. The 1950s comic book figure leads viewers to remember the old Batman comic books with the “pows” and “baams” of the super hero coming to save the damsel in distress. 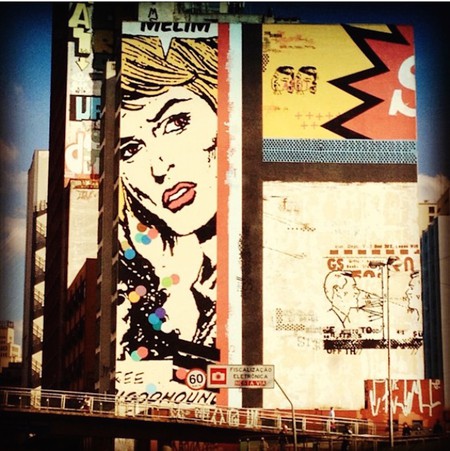