The 10 Most Beautiful Buildings In Rio de Janeiro

Rio de Janeiro is known for its natural beauty, but the urban environment always has got something to add to the original terrain to enhance its values. Take a look at these gorgeous buildings that are symbols of the ‘Cidade Maravilhosa’, and are temples of beauty. Many of them date back to the Empire of Brazil (1822-89), when Rio was the capital city. Discover our selection of the top 10 architectural gems in Rio. 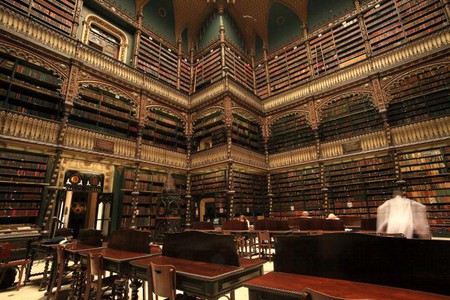 This elegant building, Real Gabinete Português de Leitura, is home to the largest and most valuable Portuguese literature collection outside of Portugal. Constructed between 1880 and 1887, it holds more than 350,000 volumes, bringing together rare books from the 16th, 17th and 18th centuries. Its incredible architectural beauty and its rich collection transport the visitor back to the 19th century. The reading room was built in a ‘neomanuelino’ style that evokes the exuberant Gothic Renaissance style from the Portuguese Discovery period. The façade, inspired by the Jeronimos Monastery in Lisbon, was carved in limestone in Lisbon and brought to Rio by ship. The statues and medallions sculptured in the entrance portray distinguished Portuguese men, including Pedro Álvares Cabral, Luís de Camões and Vasco da Gama, as the eternal guardians of human knowledge and discovery.

This museum is located in the Niterói, and was designed by the architect Oscar Niemeyer in 1996. The MAC has become one of most iconic monuments of the city due to the boldness of its contemporary features, which make it resemble a chalice or a flying saucer. The MAC Niterói presents bare concrete in a round, smooth and futuristic shape. Located on top of Boa Viagem Lookout, on Niterói’s seafront, the museum enables visitors to enjoy panoramic views from the courtyard, as well as from the inside, through its huge glass windows that divide the building into two strips. MAC Niterói primarily displays contemporary artworks, and has the second largest collection of contemporary art in Brazil.

Opening in 1909, this theater is now the leading playhouse in Brazil, and is one of the most important in South America. The Teatro Municipal hosts all the major international and Brazilian artists, from dancers to musicians. Its architecture and decoration is impressive. The façade features large marble columns and is notable for its stone staircase, stained glass windows and the three domes on the roof. The interior of the theater is as luxurious as the façade. In the entrance hall are two bronze statues that represent dance and poetry. In the foyer, several masterpieces stand out; the three precious stained glass windows that Fuerstein and Fugel created in Stuttgart and the dome painted by Eliseu Visconti. Moreover, the magnificent ceilings, the Venetian mosaic floors and the marble countertops make this building a work of art.

Built between 1964 and 1979, this cathedral is dedicated to Saint Sebastian, the patron saint of Rio de Janeiro. The main door is composed of 48 bronze plaques with bas-reliefs that cover topics related to faith. The cathedral’s beauty lies in its interior, where four vividly colored rectilinear stained glass windows span 64 meters from floor to ceiling over the walls in the four cardinal points. This gives the church beautiful natural lighting and a mystical atmosphere. In the basement, the Sacred Art Museum has a collection of sculptures, murals, artwork, and fonts used to baptize the members of the Portuguese royal family.

Vista Chinesa is a monument that stands 780 meters high and is located in the Tijuca Forest, at the ascent of the Alto da Boa Vista. Although built in 1903, its name dates back to the nineteenth century, during the reign of D. João VI, when Chinese people who came to cultivate tea in Brazil inhabited the area and finally established themselves in the country. Famous for its oriental style gazebo with spectacular views of the city, it has won an award in China as the best example of a Chinese gazebo outside of the homeland.

Founded in 1590 by monks coming from Bahia in the north, the Benedictine monastery of Rio de Janeiro was built upon the request of the inhabitants of the newly founded city of São Sebastião (which would later become Rio). A fine example of early colonial architecture, this is a place of silence, peace, prayer and work. Here you can enjoy calming Gregorian chants, sung by the monks in Sunday Masses at 10am. In their repertoire are pieces from the fifth to the 12th century, an adaptation of Apassionata Sonata by Beethoven, and an indigenous composition entitled Ave Maria – Maria Atuaximbagê, from a tribe located in the Xingu Park and adapted by Don Placido Lopes de Oliveira, musical director of the choir.

This gorgeous confectionery was founded in 1894 and is part of the historical and artistic heritage of Rio de Janeiro due to its long-standing presence, architecture and decoration. A portrait of the belle époque in Rio, the Confeitaria Colombo still retains much of the art nouveau style of the early 20th century. Its glamorous salons, with Belgian crystal mirrors, frames, rosewood showcases and Italian marble counter-tops, all remain intact. The place has a glorious past, having been a meeting point for intellectuals, poets, artists, politicians and heads of state, such as King Albert of Belgium in 1922 and Queen Elizabeth II of England in 1968.

This building is the first church that was built in Rio de Janeiro, and dates back to 1630. It went through a series of reforms to reach its current state in 1898. It was built on the site of a chapel, founded in 1610 by Antônio de Palmas and his wife as a means of showing gratitude to God for having survived a shipwreck. The neoclassical interior is covered in marble and features colorful stained glass windows, stunning paintings that are distributed on the roof of the aisles and the dome, and doors richly worked in cast bronze.

This museum, dedicated to fine arts, opened in 1938 and was built to house artworks brought by D. João VI of Portugal in 1808. It currently houses over 16,000 pieces and is one of the most important cultural institutions in Brazil, being particularly abundant in 19th century paintings and sculptures. The main façade is inspired by the French Renaissance, with gables, colonnades and terracotta reliefs representing the great civilizations of times gone by. The rear façade is a perfect example of neoclassicism, with ornamental reliefs crafted by Edward Cadwell Spruce. Materials such as marble and mosaics, plaster, crystals and French pottery were used for its interior decor.

The Palácio do Catete was built in 1858 and is a prime example of neoclassical architecture in Brazil. It has a pink granite and marble façade and portals framed by white marble. Bronze eagles feature on the front of the building. Inside, the hall’s main feature is a sequence of six marble columns leading to the main staircase. The rooms exhibit antique French and Brazilian furniture, numerous paintings on the walls and ceiling, as well as sculptures, chandeliers and porcelain from the 19th and 20th centuries. The Palácio do Catete is part of a magnificently landscaped park with reflecting pools, lakes, caves and bridges.