The 10 Best Contemporary Artists from Brazil

Over the last half a century, Brazil has spawned an impressive number of innovative contemporary artists working across the mediums of painting, sculpture and photography and helping cement the country as an art and culture destination. Here are ten of the best contemporary artists that call Brazil their home, from Albano Afonso’s haunting illuminations, to Ernesto Neto’s organic sculptures and Rodrigo Torres’ banknote collages. Read about their artistic achievements and see which galleries in Brazil host their work.

Sculptor and painter Saint Clair Cemin was born in the small, rural city of Cruz Alta in the south of Brazil in 1951. At the age of 18, he moved to São Paulo where his interest in art was cemented and he began experimenting with surrealistic illustrations. He studied at the École Nationale Superiere des Beaux Arts in Paris and, in 1978, his wanderlust took him to New York, Egypt and Bali before he settled in Brooklyn. His sculptures draw inspiration from both his studies and travels, paying a contemporary homage to sculptors before him and referencing global cultures while employing a wide range of materials from stainless steel and bronze to ceramics and marble. Cemin’s 2012 sculpture And Then (I Shut My Eyes), constructed in both bronze and lacquered carbon fibre, is reminiscent of a figure meditating, or what Cemin calls ‘an imperfect Buddha’.

Art Gallery
Facebook
Email
Twitter
Pinterest
Copy link
Share
Map View
Born in 1964 in São Paulo where he lives and works today, Albano Afonso had his debut exhibition in 1994 at the Centro Cultural São Paulo and has since enjoyed acclaimed exhibitions across the globe including in Lisbon, Paris, Miami and Kawasaki. The artist works at the intersection of painting, photography and cinema in his exploration of the intangibility and anatomy of light. Using an array of different materials, Afonso examines the abilities and functions of light creating vivid tableaus and landscapes in which light bulbs, mirrors and constellations are predominant features. His work The Garden, I make in it the return to the infinite (2010) is a miniature scene constructed in bronze and crystal and backlit by a projector casting a haunting shadow, while in his 2002 series Self-portrait with light Afonso captures photographs his reflection with camera flash on, creating a purposefully obscuring flare of light.
Open In Google Maps
1324 Rua Estados Unidos, Jardins São Paulo, 01427-001, Brazil
+551131675621
Visit Website
Give us feedback

Often hailed as one of the most noteworthy Brazilian installation artists of recent times, Ernesto Neto fashions large-scale artworks inspired by organic forms, such as the human body’s inner topography. The internationally renowned visual artist, whose work is included in permanent collections at prestigious venues including the Tate Gallery in London and New York’s Guggenheim, primarily uses elastic materials and often encourages viewer interaction, inviting one to touch or immerse themselves in his artworks. Cuddle on the Tightrope (2012) is a crocheted piece, a skill taught to him by his grandmother, with a labyrinthine and womb-like structure that viewers walk through on a suspended path. By contrast, I Wanna Bite You, Baby! (2011), which was exhibited at the 2012 Frieze Art Fair, is constructed from rigid Corten steel and takes the form of a mechanically engineered clover flower chain.

One of the Brazilian art world’s most famous exports, Vik Muniz was born in 1961 to a working class family in politically turbulent São Paulo and has since risen to international recognition by becoming a critically acclaimed and commercially successful artist. Muniz, though initially working with sculpture, migrated to the mediums of drawing and photography and now creates reinventions of iconic images from commonplace, appropriated materials such as paper, chocolate and garbage inspired by both pop culture and classic history. Muniz’s Pictures of Magazines 2 series is meticulously crafted from pages ripped from magazines, imitating works of fine art including George Stubbs’ Green Monkey and Gustave Courbet’s The Origin of the World. Muniz’s project involving rubbish reclaimed from Jardim Gramacho, one of the world’s largest landfill sites, was the subject of Waste Land, a 2010 documentary by director Lucy Walker.

Rodrigo Torres at A Gentil Carioca 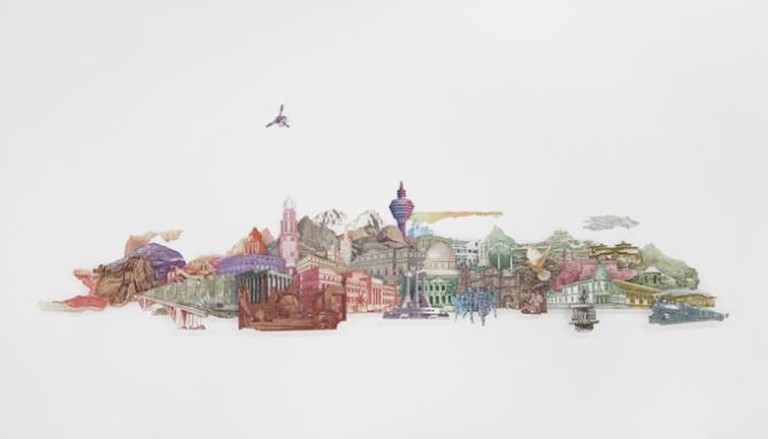 No Man's Land (2012), cut and paste of money 80 x 120 cm | Courtesy A Gentil Carioca
Young artist Rodrigo Torres was born in 1981 and is currently based in Rio de Janeiro. Torres was educated in painting at the Federal University of Rio de Janeiro’s School of Fine Arts before studying photography at the city’s Atelie da Imagem. Between 2006 and 2010, he worked as an assistant under fellow Brazilian artist Luiz Zerbini, whose abstract collages no doubt helped form Torres’ artistic direction. Torres is perhaps best known for his captivating, colorful and intricately crafted banknote collages sourced from around the world. Recognizing the similarities between art and money, in that their value is far greater than the medium on which they are printed, Torres takes this notion one step further, creating art from money, and thus elevating the currency’s worth.
Open In Google Maps
17 Rua Gonçalves Lédo, Centro Rio de Janeiro, 20060-020, Brazil
+552122221651
Visit Website
Give us feedback

Rio de Janeiro-born and bred multidisciplinary artist José Bechara, whose innovative and eclectic body of work spans drawing, painting, sculpture, and installation, was educated locally at the esteemed Escola de Artes Visuais do Parque Lage. Bechara has been exhibiting his works since 1992 and has been shown at high-profile Brazilian events and galleries including the 25th São Paulo Art Biennial and Rio’s Museu de Arte Moderna. His varied use of materials and mediums includes a series of earthy toned paintings, such as Untitled (1997/8) and Campo para Dois (2013), created through layering different strands of carbon steel wool onto reclaimed tarpaulin and allowing it to rust and fuse with the canvas, and Escultura Grafica – an installation series of 3D geometric structure which Bechara started working on in 2009.

Fernanda Quinderé was born in 1979 in the capital Brasilia before she and her family relocated to Rio de Janeiro. She later attended the Escola de Artes Visuais do Parque Lage, before taking painting classes at Estácio de Sá, and received her first exhibition in 2004 at Galerie Debret in the Brazilian Embassy Cultural Centre in Paris, France. Quinderé was a nominee at the 2013 PIPA Prize awards, which recognizes contemporary talents in the Brazilian art circuit and, in her earlier body of work, was known for creating large, Op Art-influenced paintings comprised of tiny squares of gradually grading colors leading towards a focal point of light. In her more recent work, Quinderé has employed digital technology to create her trademark monochrome squares, which she prints on cotton or photographic paper to equally stunning visual effect.

Museum
Facebook
Email
Twitter
Pinterest
Copy link
Share
Map View
The often vibrant, sometimes monochromatic works of Gonçalo Ivo are a meditation in geometry and the sensation of color. The artist, born in 1958 in Rio de Janeiro and the son of Brazilian poet, journalist and writer Lêdo Ivo, has been exhibited at galleries in his homeland and overseas such as the São Paulo Museum of Contemporary Art and the Museum of Geometric and MADI Art in Dallas, Texas, and now divides his time between his Paris home and Brazil. His paintings, characterized by brightly colored geometric stripes and shapes such as Fuga – Acordes da Primavera(2012) and Pano da Costa (2009), are reminiscent of patchworks and mosaics. Ivo has also created a body of ethereal watercolor paintings and contemporary sculptures that stay true to his dual passions of color and geometrical forms.
Open In Google Maps
911 Rua Bernardo Guimarães, Funcionários Minas Gerais, 30140-905, Brazil
+553132613910
Visit Website
Give us feedback

Rising star of Brazil’s contemporary art world, Rodrigo Mogiz employs a combination of drawing, painting and embroidery to create enchanting, dreamlike scenes that examine notions of gender, sexuality and violence. The Belo Horizonte-based artist appropriates images of young men and women from the pages of popular magazines and sketches them on fabric, in almost electric hues, before adorning them with embroidered detailing, beads, sequins, lace and pins. The effect is a body of delicate, visually alluring work that initially draws viewers in before prompting them to look past its apparent beauty to the more pertinent underlying messages and often overtly sexualized portrayals of gender – a commentary on how audiences absorb the superficial images of popular media cultures without questioning their meaning.

Ramonn Vieitez, born in Recife in 1991, is a relative newcomer to Brazilian contemporary art, having only been exhibiting his work since 2010. Nevertheless, the young artist is already making waves in the country’s art circles and abroad with two group exhibitions at New Jersey’s boutique Gallery U and Rio de Janeiro’s 2013 Belvedere Gallery Contemporary Art Award under his belt. A self-taught oil painter, Vieitez lists horror, the dark works of Slovakian artist Andrej Dúbravský and 1980s kids fantasy film The Neverending Story among his greatest influences. Vieitez instils in his paintings elements of fantasy, violence, love and hate and the supernatural as in The Yellow Door Killer, an urban scene examining the violent side of human nature through cultural symbols of hate.