São Paulo vs. Rio De Janeiro: Where Should You Go? 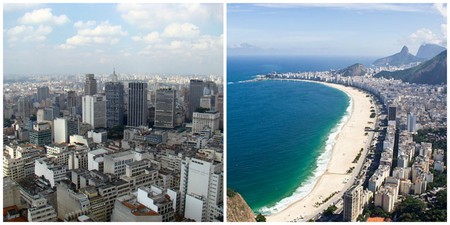 Comparing São Paulo and Rio de Janeiro is complex and is can be simplified by categorizing São Paulo into the business hub and Rio into the laid-back, beach-life scene. This is true to a degree, yet conflicts with Rio’s thriving commercial area and São Paulo’s intense nightlife regions. Here, Culture Trip delves into the hearts of the two in an attempt of a side-by-side comparison of these Brazilian giants.

São Paulo’s reputation as the business district of Brazil has attracted immigrants for years, granting the city the diversity to bloom into a multicultural metropolis. This has led to a gastronomic revolution with a rich multiplicity of restaurants influenced by well-known foodie cultures such as Italian, Japanese and Arabic. The metropolitan vibe of São Paulo is challenging Brazilian traditions and opening up to new suggestions that have brought along an array of food trucks and pop-up joints throughout the city with locals wholeheartedly embracing the creativity and innovation they offer.

The Italian and Japanese influence extends to Rio with several good sushi restaurants and pizzerias, yet the general approach to food in Rio is far more laid back than in São Paulo. Food choices tend to be built around an outdoor lifestyle with healthy and quick options available at the fruit and snack bars that pepper the streets throughout the city. 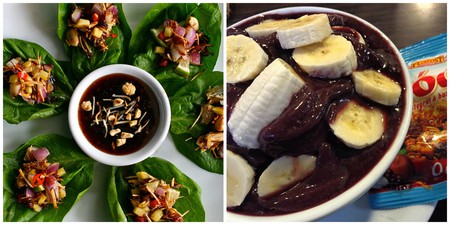 Rio is nicknamed Cidade Maravilhosa (the Marvelous City) for the undeniable fact that it is one of the most beautiful cities in the world. Built next to a golden coastline and flanked by granite peaks, the unique combination of nature meets urban civilization is sensational. Rio is also home to the world’s largest urban forest that mingles between the city’s neighborhood, providing jaw-dropping beauty around every corner.

São Paulo, on the other hand, is a huge concrete jungle of complex networks made up of one-way streets, intimidating skyscrapers, heavily polluted highways and dense commercial centers that are home to over 11 million. Row after row of buildings make up the horizon that stretches back into an endless rough sea of gray. What it lacks in natural beauty, it flaunts in outstanding sheer size; head to the Skye bar, often voted one of the best rooftop bars in the world, to gauge just how big this monster city is. 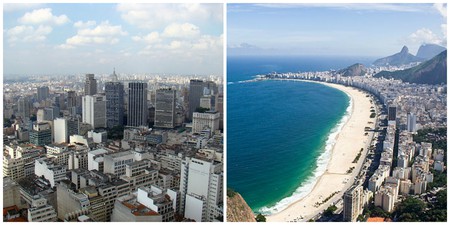 Rio’s landmarks are known throughout the world and one of the strongest pulling forces that bring so many tourists to the city each year. The Corcovado mountain is perhaps one of the best-known peaks in Rio, famous for being the base of the Christ the Redeemer and proving outstanding views over the city and its natural landscapes. Other landmarks include Tijuca forest, the largest urban forest in the world, Sugarloaf mountain and of course, the famous Copacabana beach.

São Paulo has lesser known landmarks but as would be expected from a city of 11 million people, there are plenty of key spots to visit that are unique to the city. Take a walk down Avenida Paulista, the main strip for business and restaurants that is centered by a slow-moving highway and flanked by large, modernist buildings. Ibirapuera park is a natural refuge and has regular art exhibitions, live music and outdoor cinemas. Other key landmarks include Sao Paulo cathedral and the Municipal Market of São Paulo for an incredible assortment of restaurants and fresh foods. 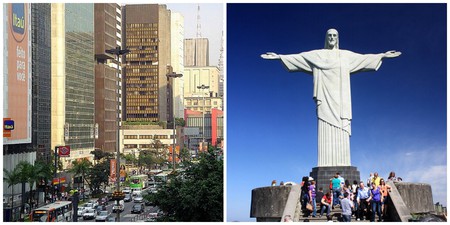 The art scenes of both cities are thriving with a vibrant and dynamic collection of museums, art galleries, open-air exhibitions, street art and art festivals. In Rio, the Museu de Arte Contemporanea Niteroi (The Museum of Contemporary Art of Niteroi) is just as famous for its contents as it is for its famous design by Oscar Niemeyer. Other art museums worth checking out are the Museu de Arte Moderna (Museum of Modern Art), Museu do Arte do Rio (Rio Art Museum) and the Museu de Artes Belas (The Museum of Fine Arts). The street art scene is big in Rio and a street art tour through the neighborhoods is enlightening and fascinating

For street art in Sao Paulo, check out the street Beco do Batman in Vila Madalena which has become the outdoor canvas for some of the city’s best graffiti artists. Other places worth checking out are MASP (Museu de Arte de São Paulo), Galeria Vermelha and Galeria Choque Cultural. Art festivals are frequently held in both cities and celebrate films, paintings, international exhibitions, theater and photographs. 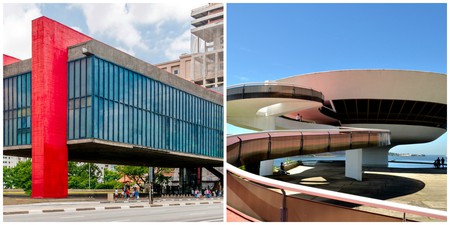 São Paulo is domestically considered the fashion capital of Brazil and the city is beginning to enjoy its moment under the global lense as it hosts the bi-annual São Paulo fashion week that is the fifth largest in the world, just behind the fashion capitals London, Paris, New York and Milan. The cosmopolitan style of life influences the need to dress to impress with fashion a key element of daily life. Clothes tend to be well-matched, hair and make up on fleek and brands a sign of wealth and style. There is also an increasingly large hipster scene in São Paulo with the youth reaching out for vintage and alternative brands to outwardly show their individuality and values. For shopping, check out Oscar Freire street — it’s home to all the best national and international designers.

On the other hand, the general consensus in Rio is that the best fashion accessory you can wear is your body, with locals striving to get the ideal body that is muscular, strong and tanned. Fashion is kept simple and laid back with flip-flops as the stable shoe, even on nights out. Clothes tend to be light and little, a factor of the heat and the desire to show off the efforts of hours in the gym. The best places for shopping are the main streets in Copacabana and Ipanema or the main shopping malls such as Rio Sul or Barra Shopping. 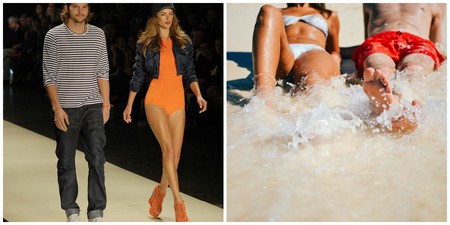 Rio de Janeiro is a city of the day with hikes, waterfalls and the beach to enjoy when the weather is out. There are bars all throughout the city, with the main nightlife scene in Lapa with lively venues and samba-filled nightclubs.

Yet the real night-owls go to São Paulo, where the night doesn’t kick off until midnight and goes on until the sun comes up; after-parties starting at 8 a.m. are not unheard of! The range of nightlife spots in São Paulo is huge, exciting and immensely varied, including electronic music at D-Edge or clothes-optional sauna parties. São Paulo also plays host to some of the most established festivals in the world with Tomorrowland, Lollapalooza and Sonar on its annual calendar.

For Carnival, Rio de Janeiro wins hands down for the best Carnival celebrations in Brazil, from extravagant parades to outrageous, liberal street parties. 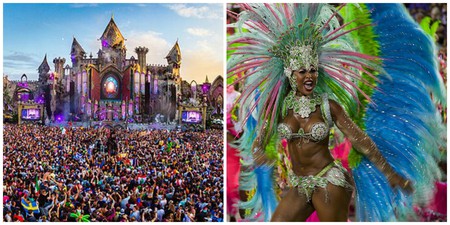 Between the two cities, Rio de Janeiro is the most expensive, especially when it comes to rental prices. In Zona Sul (south zone) of the city, expats looking to rent an apartment in neighborhoods such as Jardim Botanico, Leblon or Ipanema can be faced with similar costs to what they would pay in large European or American cities. Public transport tends to be more expensive in Rio compared to São Paulo. Bars and restaurants in Rio’s Zona Sul are often charged at foreigner prices and are a lot more expensive; go to the city center or neighborhoods such as Catete or Santa Teresa for cheaper eating and drinking options. Likewise, in São Paulo, Avenida Paulista is more expensive due to its location in the heart of the business district; head to downtown or neighborhoods such as Pinheiros for quality restaurants at cheaper prices. 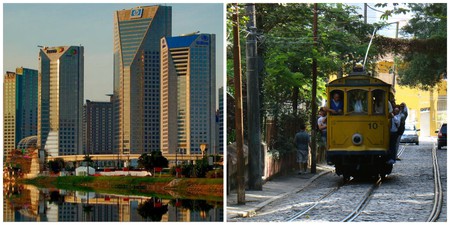