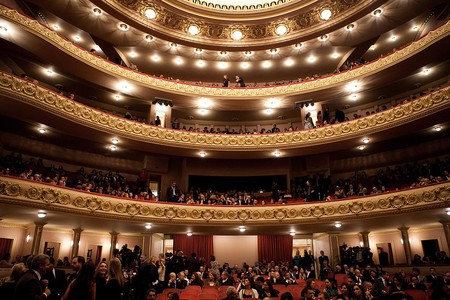 The inside of the theater |© Boing-boing/WikiCommons

The Teatro Municipal (Municipal Theater) is one of the most impressive classical buildings in Rio de Janeiro. With its distinctive green towers and intricate golden detailing, it dazzles on the outside – yet the artistic flair on the inside is even more breath-taking: a result of the collaboration of some of the best painters and sculptors from the 20th century. We explore the history of one of Brazil’s most important and beautiful theaters.

In the second half of the 19th century, interest in theater was booming, yet Rio de Janeiro, the capital of Brazil at that time, only had two theaters which were often criticized for their poor facilities. As part of a project to revamp the city, it was decided that a new one would be built, with construction beginning in 1905. The new theater would play an important role for national and carioca (meaning ‘from Rio’) culture. 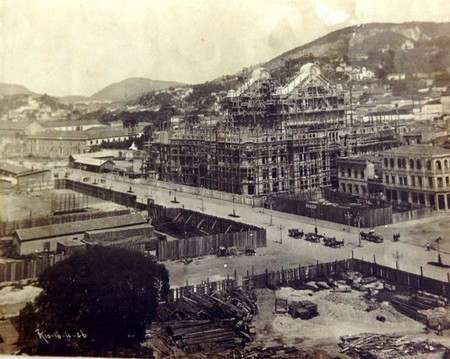 The Municipal Theater under construction in 1906 | WikiCommons

The construction required a large collaboration of sculptors and painters, including some of the most important Brazilian artists of this era. The exterior was designed in an eclectic style, inspired by Charles Garnier’s Paris Opera, and has inscriptions of the names of a number of pre-eminent artists. The most distinguished works on the inside are from Eliseu Visconti, Rodolfo Amoedo and the Bernardelli brothers, and include magnificent sculptures and paintings. The stained glass work and mosaic tiling are credited to various European artists. The construction took four and a half years, reaching completion in 1909 when it was publicly opened by president Nilo Peçanha. 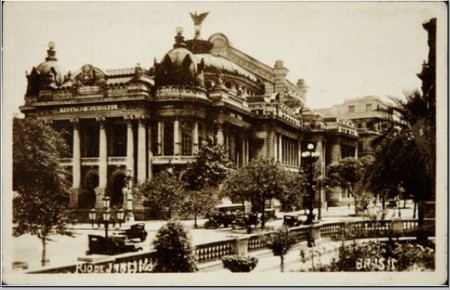 The completed theater in 1909, as shown on a postcard from the same year | WikiCommons

The restoration of the theater from 1975 to 1978 played a central role in maintaining its beauty and quality facilities. After modifications, the theater’s capacity increased from 1,7239 to 2,361 and an annex was added in 1996 to lessen the pressure on the building from the intense rehearsals inside, giving choirs and orchestras a new artistic space for practice. Another major renovation was undertaken to celebrate the theater’s centenary. The state invested 70 million reais (approximately 21.7 million US dollars in today’s money) to bring the building back to its former glory. Thousands of gold leaves were imported from Germany to restore the outside, yet one of the most impressive restoration projects was the panels in the foyer when a heavily damaged painting by Eliseu Visconti was restored back to its original state. It was later considered one of his most significant masterpieces. 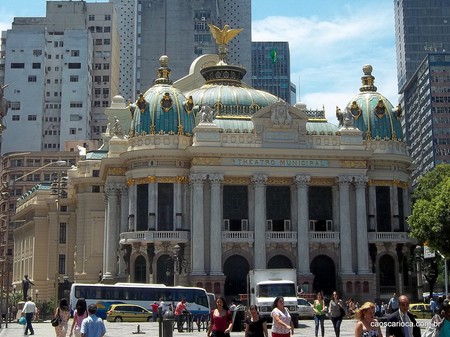 In the past, the theater was only used for foreign opera and symphonic orchestra shows, especially those from French and Italian companies. Nowadays, it has various performances and productions of ballet and classical music, and houses the Petrobras and Brazilian Symphonic orchestras. The productions there are stunning and well worth a visit. There is also a restaurant in the theater that allows visitors to eat and drink whilst absorbing the artistic masterpieces on the inside. The calendar of productions and performances can be found on the theater’s website.

The inside of the theater | © Boing-boing/WikiCommons
Give us feedback