Recent host of the World Cup final and the Olympics, Rio de Janeiro is quickly becoming one of the world’s premier tourist destinations. In culinary terms, there’s plenty to meet that demand in this Brazilian hotspot. We explore 10 of the most luxurious dining experiences Rio has to offer, from restaurants offering traditional dishes served with excellence, to a new style of haute cuisine. 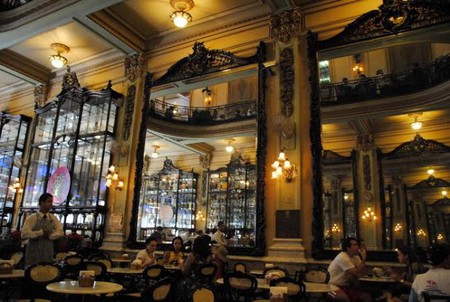 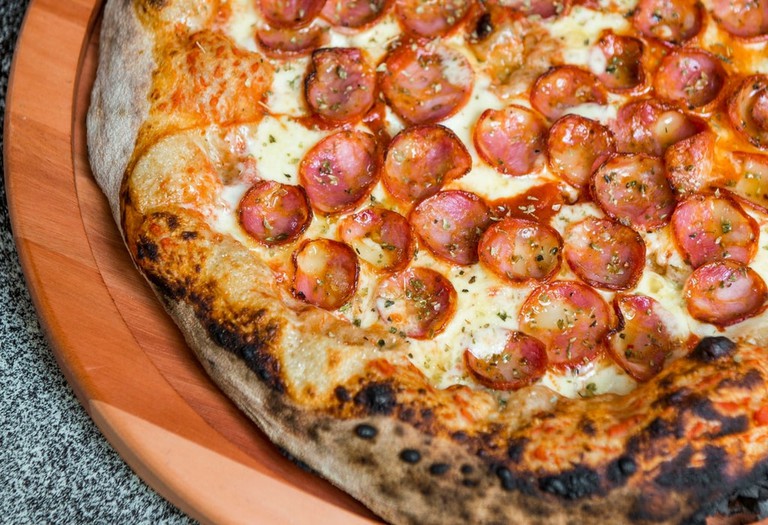 Brazil’s history of Italian immigration has left a welcome culinary legacy and Bráz produces delicious, thick pizzas with a wide-range of carefully selected vegetable and meat ingredients. There are also a host of delicious dessert pizzas, filled with delicious Brazilian brigadeiro chocolate. Wood-fired ovens cook your pizzas in open view; whilst the draft beer selection is excellent, with options of light, dark or mixed.

Founded in 1894 by Portuguese immigrants, the magnificent coffee house of Confeitaria Colombo is a true belle époque spectacle, of the sort rarely found elsewhere in Latin America. Its high ceilings, tall mirrors, sourced from Belgium, and stained glass have resulted in its art-nouveau decor becoming something of an independent attraction in Rio. Diners will not be disappointed by the variety of excellent sweet and savoury pastries on offer, from the Portuguese pastel de nata, made with egg custard, to shrimp and heart of palm. Those getting into the belle époque grandeur can have the complete set, with high tea served in the afternoon. Later in the day, customers are treated to live music to complete the atmosphere.

Restaurant, Brazilian, Contemporary
Facebook
Email
Twitter
Pinterest
Copy link
Share
Map View
Established in 2011, in a reformed town house in Rio’s traditional Botafogo neighbourhood, Irajá Gastrô strives for relaxation and informality, from a waiting area resembling a living room to casual dishes served in style. The house burger, made of Angus beef and served with bacon compote, is considered to be one of the best in the city, whilst dishes such as its galinheiro evoke Brazilian home cooking with a twist, poached egg with a chicken glaze and corn purée. Finally, Irajá Gastrô has an adventurous list of cocktails to accompany its dishes, such as the Tropicalista, gin and coconut water with wasabi, basil and cucumber; or its variation on sangria, Malbec red wine with grapefruit-flavoured ice, berries, port and soda.
Open In Google Maps
109 Rua Conde de Irajá, Botafogo Rio de Janeiro, 22271-020, Brazil
+552122461395
Give us feedback 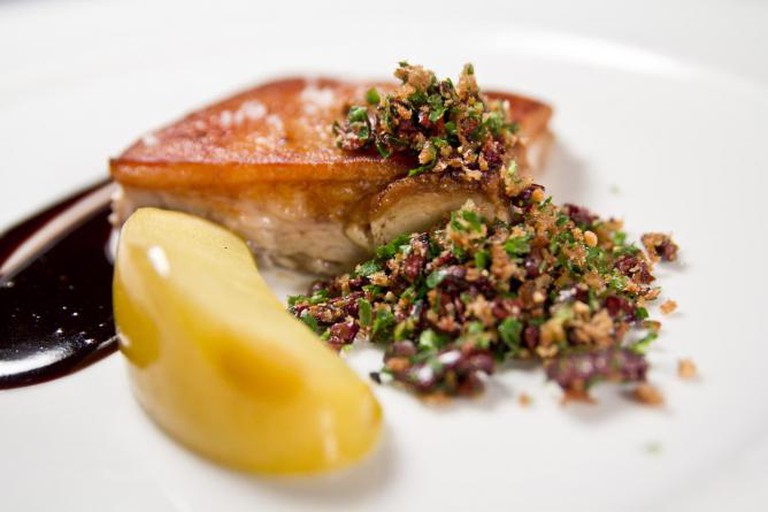 O Navegador, Rio de Janeiro | Courtesy of Olympe
The old-world restaurant of O Navegador is set above Rio’s naval officers’ club on Rio’s main thoroughfare, a suitable location for a place of such elegance. There is a dress code (no shorts or t-shirts) a rarity in Rio, but even more surprisingly, despite its ostensible pretensions, O Navegador does not attempt to rehash European dishes. Rather, chef Teresa Corção’s creations are Brazilian through and through: pork ribs, dried beef, fish stews and the national dish, feijoada, a hearty stew of beans and salted meat, are all served with excellence, without being suffocated by pomp.
Open In Google Maps
Clube Naval, 180 Avenida Rio Branco, Centro Rio de Janeiro, 20040-003, Brazil
+552122626037
Give us feedback

Founded by émigré French chef Claude Troigros, Olympe brings the haute cuisine of France to Brazil, with a few local twists along the way. Traditional dishes such as foie gras with pears served in red wine, or chicken breast with mushrooms and herb jus come straight from the finest French cooking schools. Meanwhile, the duck is garnished with the tropical passion fruit, and the salmon with manioc sauce and cilantro. The wine list is thoroughly traditionalist, bringing fine wines from France, which together with an elegant interior help make Olympe an old-school, fine-dining experience.

Celebrated local chef Felipe Bronze opened Oro in 2010 to integrate Brazilian ingredients and recipes with avant-garde cuisine of the highest order. Oro has made its mark and won numerous awards since it was founded, with everything from the wine to the crockery carefully selected. The design is centred on a warm combination of bricks and wood, with a 10-meter mural on the second floor. The food itself experiments with typical Brazilian flavours, açaí, the popular Amazonian berry, served with foie gras or tempura fish served with oyster mayonnaise; while capricious desserts are served with liquid nitrogen, to complete the spectacle.

Pérgula enjoys an exclusive poolside setting inside Rio’s legendary Copacabana Palace hotel, the pinnacle of Rio’s luxury scene. The restaurant is suitably casual yet doesn’t skip on its fine-dining obligations and is known for its Sunday brunch, with salads, club sandwiches, cold cuts and, not least, caviar and oysters washed down with Prosecco. All in all, a perfect place to relax in truly palatial settings. 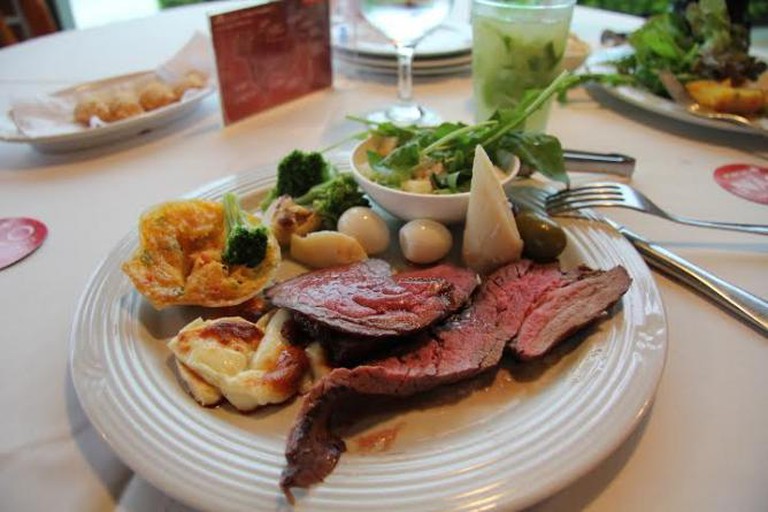 Porcão Rio's | © Phil King/Flickr
‘Big Pig’ may not sound like a fine-dining experience, but when sat out overlooking the Bay of Guanabara and the magnificent Sugar Loaf Mountain, drinking a caipirinha cocktail and enjoying Brazilian picanha beef, you’ll understand why Porcão Rio’s has such a sterling reputation. An extensive buffet offers elegant salads using fine ingredients and even an excellent sushi bar. In the tradition of a Brazilian rodízio restaurant, waiters come to your table with skewers of any meat imaginable, still sizzling from the barbecue and with unbeatable flavour.
Open In Google Maps
Av. Infante Dom Henrique, s/n - Aterro do Flamengo, Rio de Janeiro, 20021-140, Brazil
+552135212900
Give us feedback

Restaurant, Japanese
Facebook
Email
Twitter
Pinterest
Copy link
Share
Map View
Amid the chaos of Rio’s central Rio Branco avenue, enter into an unassuming office building and go up to the third floor. You’ll soon understand why Shin Mura, despite running for 40 years, is one of Rio’s best-kept secrets. This Japanese Brazilian restaurant serves traditional dishes from Nagasaki, along with modern experiments. The highlight is the tasting menu, producing the likes of kobi beef, lobster, and exquisite combinations of grilled tuna sushi with foie gras, and soy and honey ice cream.
Open In Google Maps
Rio de Janiero, Brazil
Give us feedback

In the exclusive Leblon neighbourhood and one of Brazil’s finest sushi restaurants, Sushi Leblon is so popular that booking in advance is advised. A dark, sleek and atmospheric interior prepares you for the host of excellently crafted sushi on offer. As a starter, try their variation on tamagoyaki, the ubiquitous omelette roll, made with a fried quail egg. As well as traditional sushi made to perfection, Sushi Leblon offers creative variations, such as the the sushi batera, rice with furikake, salmon, capelin, wasabi cream and lemon, or the foie gras roll marinated in red wine with capelin.