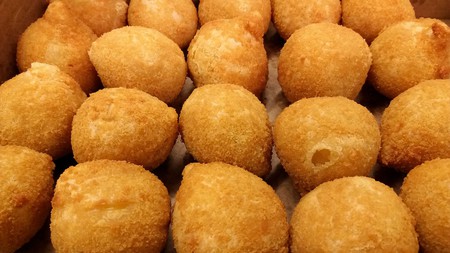 Believe it or not, there are some people who come to Brazil who are not won over by those famous Brazilian stereotypes. Some people don’t like samba, don’t like carnival, find soccer boring and there are even some who don’t like feijoada. However, there is one thing that unites all visitors to Brazil, a common ground between the human race as a whole, and that is the love for the country’s most emblematic deep-fried snack: the coxinha.

Coxinha (pronounced co-sheen-ya) translates from Portuguese as “little thigh”, and is a breaded and fried dough-based snack filled with chicken, shaped to loosely resemble a chicken drumstick (coxa in Portuguese). They can be found anywhere, from gas stations to bakeries and hole-in-the-wall bars to fancy restaurants – and they are really, really good.

British TV chef Nigella Lawson famously fell in love with the coxinha on a visit to São Paulo in 2013, prompting her to post her own recipe on her website for these “pear-shaped chicken croquettes” and gaining her plenty of new Brazilian fans.

Me with coxinha in Bella Paulista: midnight feast of joy pic.twitter.com/ogOyboaWJB

Where they come from

The exact origins of the coxinha, like many things in Brazil, are unclear. One of the more romantic and fanciful theories dates back to the 19th century and Brazil’s imperial period. The story goes that one of the sons of Princess Isabel, the daughter of Emperor Pedro II, refused to eat anything other than fried chicken drumsticks, until one day, at one of the royal family’s farms in the state of São Paulo, they ran out of the child’s favorite food. In a bind, the family’s chef decided to shred meat from other parts of the chicken, form it into the shape of a drumstick, and fry it. The boy is said to have adored the new invention, and the boy’s grandmother, Empress Teresa Cristina, demanded the snack be served in royal kitchens around the country.

Another theory states that the recipe is in fact French, being nothing more than a differently-shaped chicken croquette. Perhaps the most believable origin story is that during the industrial boom in São Paulo in the late 19th century and early 20th century, the coxinha was created as a cheaper alternative to the fried chicken drumsticks that were often sold outside the city’s factories.

How they are made

The traditional coxinha is made from a dough of wheat flour and chicken stock, though potatoes, sweet potatoes or cassava can also be used to provide different flavors and textures. The dough is then filled with shredded chicken which has been lightly seasoned, and often a dollop of creamy Brazilian cheese known as requeijão. They are then shaped into the traditional drumstick/pear/teardrop shape, breaded, and deep-fried until golden and crispy.

Over the years, many variations have popped up on the classic coxinha fillings, with coxinhas de pernil (made with shredded pork shoulder) being readily available, especially in São Paulo. There are also some delicious vegan alternatives, such as coxinhas filled with shimeji mushrooms or jackfruit flesh, which bears a striking resemblance to the original shredded chicken filling.

Although ubiquitous across Brazil, the coxinha is most often associated with the state of São Paulo, where the snack initially became popular. While you can find them in every diner, snack bar and bakery, here are some of the best coxinhas SP has to offer.

Widely regarded as the best coxinhas in São Paulo (ergo the entire world), the charming Veloso Bar in Vila Mariana is the perfect place to get your first taste of this legendary snack. While some run-of-the-mill coxinhas can be dry, with a little too much separation between the breading, dough and filling, Veloso coxinhas are perfectly built, with each bite melting in your mouth as each element comes together perfectly. 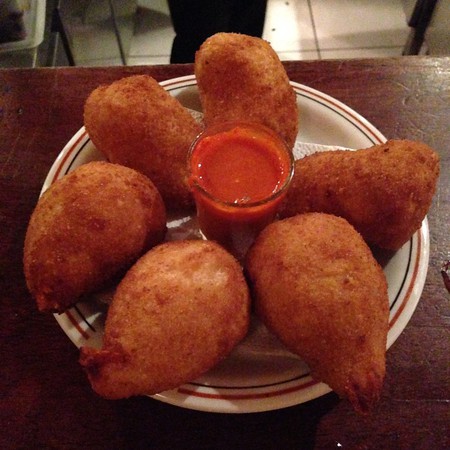 Located slightly out of the way in the northern neighborhood of Freguesia do Ó, FrangÓ is often overlooked when it comes to the best coxinhas in the city, but it is one of the few places that can claim Veloso’s crown. While classic coxinhas are usually around the size of a small pear, FrangÓ serves theirs in a mini-version which are perfect as appetizers. Crispy, well-seasoned and highly addictive, these are excellent coxinhas.

If you’re staying around Paulista Avenue and Rua Augusta, your best bet for a stellar coxinha is at Padaria Brasileira, less than one block from the Consolação subway station. Being a large Brazilian-style bakery (that means they sell everything under the sun, including bread), Padaria Brasileira can get quite full around breakfast and lunchtime, but it’s worth the wait. Alongside the traditional chicken and chicken with requeijão coxinhas, they also have a delicious vegetarian version filled with eggplant.

Around the corner from Padaria Brasileira is another iconic São Paulo bakery, the 24-hour Bella Paulista. Queues for a table can be long at peak times, but if you need any convincing, this is where Nigella Lawson herself bought the coxinha that made her fall in love with the snack. If it’s good enough for Nigella…

A bit more upmarket than the others previously mentioned, Bar da Dona Onça is a stunning, classy restaurant bar located on the ground floor of the famous Copan Building, the curved apartment complex in the historic center, designed by Oscar Niemeyer. The food is excellent and their coxinhas are not just filled with seasoned, shredded chicken, but their gorgeous galinha caipira (country chicken stew).