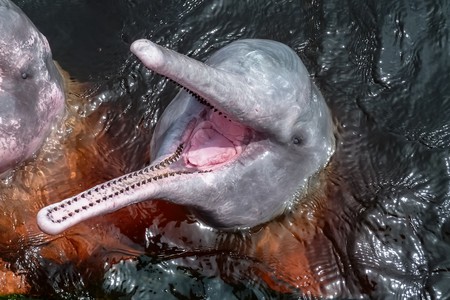 When he was just 19 years old, Dr. Fernando Trujillo, a Colombian biologist set off to study the local river dolphins in the depths of the Amazon rainforest. It soon became apparent that the plight of the river dolphins was part of a much larger and highly complex puzzle that involved a relentless battle between ecological survival and powerful economic and political agendas.

To get more background about the pink dolphins, Culture Trip spoke with Vera da Silva, a researcher at INPA, the National Institute of Amazonian Research. Da Silva explained how the threat to the botos vermelhos, or river dolphins, began when fishermen would accidentally catch them in their nets as both the fishermen and the dolphins were after the same resource—a catfish known as capaz. However, as the fisheries became increasingly depleted, the fishermen started hunting a new fish—piracatinga—and used the dolphin’s meat as a bait to catch larger numbers. 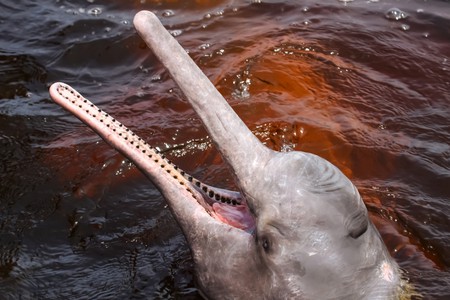 In an attempt to monitor the dolphins, da Silva and her team capture, tag, and track dolphin movements to give glimpses into their population numbers, their habitats and the reproduction rate. However, they constantly face challenges such as being a small team with few resources in a huge area. “Conservation in Brazil has been abandoned,” says da Silva. “It’s very difficult. But we have to do our best to prevent the river dolphins suffering the same fate as other large animals, such as the rhino or the panda.”

One man has dedicated much of his career to the cause of the river dolphins. Dr. Fernando Trujillo set up Fundacion Omacha that aims to study the dolphins and the Amazon in an attempt to connect the dots in the huge network of different interests, and present solutions that will satisfy all the parties involved. We spoke with Dr. Trujillo to get his take on the river dolphins, and learn about the major threats to their survival and how conservation is set within a sprawling web of deep, powerful, economic-political agendas.

How did your conservation work with the river dolphins begin?

“When I first started, it was a romantic approach. I was just 19 years old, I wanted to save the dolphins and I went to the Amazon to do so. I suddenly discovered it was a more complex situation than I was expecting because, after all these years, it’s not only about river dolphins, it’s about the Amazon itself. The dolphins are an important piece of the huge puzzle of this complex situation. I started in a small town called Puerto Nariño and I spent a lot of years working and collecting data. Then I realized I needed to get more information in other areas. Always we are saying river dolphins are very endangered and people were asking, ‘OK, how many dolphins are in the Amazon?’ We didn’t have the answers.

“At that moment, we only had a small team in Colombia working on river dolphins. So I started a big program of counting river dolphins in the whole of South America. So far, we have had 27 expeditions in the last 10 years, and we have surveyed more than 27,000 kilometer-squared (10,400 square miles) of rivers. I have more than 28,000 sightings of dolphins.”

What have been the outcomes of your conservation project?

“One thing is it’s not only about producing scientific research when you’re in a country like Brazil or Colombia. You need to do something else, not just producing data. You discover that people have needs and conservation can be very difficult when people are starved. So we started to do different economic alternatives in the Amazon. I have helped to create an association of women processing fish. Before it was a conflict between fishermen and the dolphins because the dolphins started to bite the catfish from the nets. When the fishermen wanted to sell the fish in a big city, the traders pay very little money because some of the fish had scars.

“The fishermen reacted negatively and tried to kill the dolphins, shoot the dolphins, poison the dolphins, things like that. So years ago, we created the association for women that was basically the wives and relatives of the fishermen. We trained them to preserve the fish and we actually discovered the amount of fish bitten by dolphins were very few. But that helped to identify the perception was bigger than the reality.” 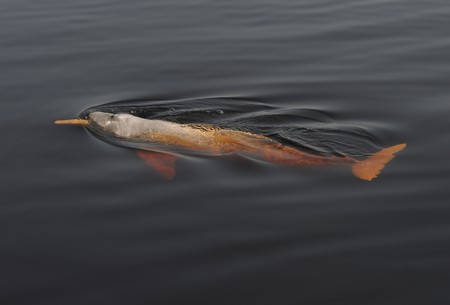 River dolphin in the Amazon | ©BMJ/Shutterstock

How are the dolphins being protected now?

“We began to put the dolphins in the center of tourism. The dolphin-watching tourism. This was very interesting because in 2007, we started to ask people going to the Amazon what was their main motivation for the trip, and about 94 percent claimed they wanted to go to the Amazon to see the charismatic river dolphins.

“We made an economic analysis. At that moment, dolphin watching was producing about $7 million a year, and now it’s producing $8.3 million in an area of only 40 kilometers (25 miles) of river. So that was a very good argument to protect the river dolphins. Also, we were working with the indigenous [people] to promote wood carvings of dolphins. There are more than 300 families receiving income from this [tourism], so we were connecting everything with the dolphins, while at the same time doing an analysis of threats in a local and regional approach between countries and aquatic ecosystems in the Amazon.”

What are some of the main challenges you are facing?

“In some ways, it is easy to connect the economic needs of the people with the conservation needs of the dolphins and the Amazon. The challenging points are on a political level. Everybody likes to talk about conservation, and most people will reach an agreement on what needs to be done. But when you put the political-economic agenda in all these countries, it becomes a little trickier.

“We are losing the connectivity in the Amazon. We can compare to the human body: it’s like we are cutting all the arteries and veins of the body and watching the consequences. The other point is the pollution of mercury. There are a lot of illegal gold mines in these countries and the release of the mercury is huge. So now we have a situation where so many fish have high levels of mercury and there are a lot of communities with mercury. Indigenous communities are in very bad conditions because of this. It’s now a public health situation that most governments are looking in the other direction.

“For example, there is a situation where, 12 years ago, a new fishery started in the Amazon. It’s a scavenger fish called piracatinga. The way to catch this fish is through the dolphins, and a lot of dolphins have been killed to use as bait. After a lot of pressure and a lot of research, the Brazilian government put a ban on piracatinga fishing. When all this started I realized it wasn’t just a problem with the dolphins. Why are people trading a scavenger fish that no one used to eat in the Amazon? What happened to the catfish?

“The answer is that the fisheries are collapsing and it’s such a big river basin. I started doing a lot of analysis and realized that piracatinga has a huge amount of mercury in it. I presented my research to my government and of other countries too. I was threatened by local traders. They threatened my life and I needed to take a lot of care for a couple of years. Now the Colombian government has banned piracatinga but the complexities are huge. You win some battles, but the war is ongoing.”

What about the people who live in the Amazon?

What about the hydroelectric dams?

“Brazil has a very strong policy for water development, but it doesn’t work because the political and economic interests are so high. Now there are 155 hydroelectric dams and at least 200 more under construction in Brazil’s Amazon. Now we have a programme with World Wide Fund Brazil and we will tag 15 dolphins in three different geographical areas to see the effects of dams and the dolphin movements. We are, in some ways, using the dolphins as ambassadors for all aquatic systems in the Amazon to try and understand what is going on.”

What are the solutions for these issues?

“We need to give economic value to this biodiversity and ecological service. It’s this that we are trying to do with dolphins. In Brazil, to kill a dolphin as bait for fish is worth about $20–$25 per dolphin. We calculated in the Colombian Amazon, one dolphin alive is producing $25,000 per year in tourism. This is an easy decision to make: $20 for one dead dolphin, or $25,000 for a dolphin alive. We need to put a value on ecology so economic agendas will consider the impact on the economy and the livelihood of the people living there.

“When you’re working with a single species, such as the river dolphin, you’re responsible in some ways to connect the conservation to the whole ecosystem and put the local people in the equation. It’s a lot of time, involves a lot of people and, I think, a lot of passion.”