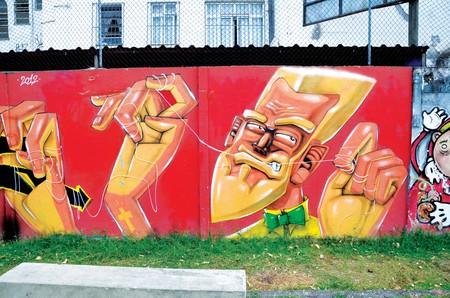 Rio de Janeiro’s streets reflect an artistic movement that is turning blank, gray walls into evolving scenes of vibrant imagery. In 2009 the Brazilian government legalized street art, allowing artists to use the city’s walls as canvases as long as they had building owners’ permission. This has led to extraordinary street art and forged an ever-growing link between street artists and the community. Here are some of the most exciting street artists in Rio.

It is widely regarded that Rio de Janeiro has two kinds of graffiti – taggers and street art. Taggers are the squiggles or shapes that represent the names of gangs or of people who are often considered vandals. These are ways of putting names out in public to get exposure or fame. Street art is considered outdoor art in its own right, with some artists receiving international recognition and exhibitions in well-known galleries. This distinction was first formalized in 1999 when the city’s council launched the Não pixe, grafite – “don’t tag, graffiti” – campaign that supported street art and discouraged taggers. Ten years on, street art’s significance was legally accepted.

Eco’s work is instantly recognizable from his trademark Pointy Chin, that is said to represent the famous Spanish artist Salvador Dalí. Eco’s talent has taken him all over the world, with art exhibitions in Paris, Spain, and Argentina. His work can be found all over the city in various images, yet all distinctly linked to Eco’s unique style. The photo below translates to, “to think is for free.”

One of Rio’s most famous female street artists, Joana Cesar is known for her large works of art that represent messages written in an indecipherable script, regarded as a secret code that only the artist understands.

Marcio SWK is one of Rio’s most influential street artists, with his work dotted all throughout the city. His style is hailed for the use of bright, vibrant colors in forms that use bold lines and sharp edges. He has achieved great international success with exhibitions in Berlin, São Paulo and Paris, and was one of the first Brazilian street artists to paint walls in Abu Dhabi. In addition to global art exhibits, large brands such as Samsung, Ray Ban, and Nike have used his prints in their advertising campaigns. Homegrown Gallery in Ipanema sells a solid collection of prints of Marcio SWK’s work.

French-born street artist, JR, had a profound impact on Rio de Janeiro’s street art when he created two enormous sculptures on the city’s buildings. One was a diver with his arms out-stretched, leaping into the waters below in Barra da Tijuca. The other depicted an athlete, standing at 85 meters (279 feet) high, with his back arched, smoothly high-jumping the top of a residential complex. The sculptures are made of a network of carefully-placed scaffolding that starts from the roof of the building and overhangs the top three floors. JR, in his artwork, wanted to celebrate the Olympics’ strength of bringing together dozens of races and nationalities in one place in a peaceful and positive way.

Eduardo Kobra entered the Guinness World Records for the largest ever street mural that can be found in Rio’s city center in the recently rejuvenated port area. The mural is huge – it stands at 15.5 meters (50.8 feet) high and is 190 meters (623 feet) long. Known as “Ethinas” (ethnicity), the mural represents five of the world’s continents and their ancient tribes, and was commissioned during the 2016 Olympics in Rio to highlight the power of unity. Blending a kaleidoscope of colors with photorealism and geometric shapes, it creates one of Rio’s outstanding street artworks. To gauge the size of the artwork, look at the person standing in front of this awe-inspiring piece in the photo below.

Carlos Esquivel, whose artist name is ACME, is famous for his vibrant and talented work on the walls of favelas, most notably in Cantagalo–Pavão–Pavãozinho in Copacabana in the South Zone of the city. Each artwork unfolds various stories of the favelas, from the past immigration that built them to the everyday struggles and problems experienced there.

Known for his colorful collages of shapes, vibrant tones and abstract patterns, Smael Vagner’s work can be spotted all throughout Rio de Janeiro. He has a permanent collection at the Inox Gallery in Copacabana, and is breaking through the international circuit with exhibitions in Europe.