Creating the World’s Most Beautiful Staircase

Jorge Selarón’s unique and vivid mosaic steps sit in tribute of his adopted city, Rio de Janeiro. The Escadaria Selarón, 125 meters of steps covered in bright tile, is a product of sheer determination by Selarón and they act are a source of inspiration for the neighborhood. 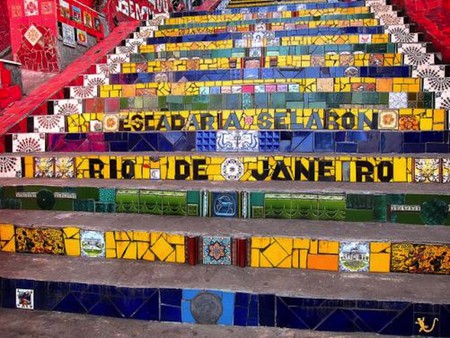 In Rio de Janeiro, nestled between the bohemian neighborhoods of Lapa and Santa Teresa sits the vibrant, impressive Escadaria Selarón, a staircase covered in more than 2,000 pieces of colorful tiles, mirrors and ceramics. An accidental art project of painter Jorge Selarón, the steps now serve as a source of optimism and inspiration for those who use them, as well as a never-ending reminder of the artist who created them.

Born in Chile in 1947, Selarón spent years traveling throughout the world while working as a painter. Living or travelling in more than 50 countries, he claimed to have sold more than 25,000 portraits before finally settling in Rio de Janeiro in 1983, with a small home in the arty Lapa district. There, in 1990, Selarón randomly began ‘renovating’ the more than 200 steps that sat across from his house, covering them with brightly colored bits of tile. Piece by piece he began transforming the brown dilapidated steps into a colorful work of art. Though it began as a creative diversion to his primary work as a painter, it was a project that Selarón eventually dedicated his life to, obsessively working on the staircase that he deemed ‘never complete’.

Selarón, a true lover of Rio, saw the project as his tribute to the city and the Brazilian people, and he began to use only blue, green and yellow tiles in honor of the Brazilian flag. The walls of the steps feature multiple mosaics signed by the artist: ‘Brasil Eu Te Amo Selarón’ – ‘Brazil I love you – Selarón’.

The Escadaria Selarón, as the steps ultimately came to be known, sit between Rua Joaquim Silva in Lapa and Rua Pinto Martins in Santa Teresa. In the gritty, yet unique, district of Lapa the extraordinarily decorated steps sit as a gem and have since become a landmark in Brazil’s most famous city.

During his work on the steps the painter often ran out of money and would return to painting, commissioning paintings simply to fund his renovations of the staircase, adding color and beauty to each step tile by tile. At first, Selarón searched around town, in antique shops and trash piles to find tiles for his steps, but as his notoriety grew people began sending or bringing him tile from all over the world – in fact, the stairs feature tile from at least 60 different countries.

Over the years, the artist repaired broken or missing pieces and modified or replaced parts that he deemed not beautiful enough. Eventually, he began to add the color red, lining the sides and walls of the steps with a bright tropical hue, claiming it added a happiness and vivacity unlike other colors: ‘It’s like if the stairway was alive. It’s always changing and becoming more beautiful… You see and feel the difference’, the artist once said.

The bright steps were mostly covered in 2000 and immediately garnered international attention, with appearances in magazines such as National Geographic and Time as well as a Fanta commercial, and music videos such as U2′s Walk On and Snoop Dogg’s Beautiful. They became a city landmark and in 2005 the artist was declared an honorary Carioca, or Rio resident – an important honor for a man with such an overwhelming dedication to his community. 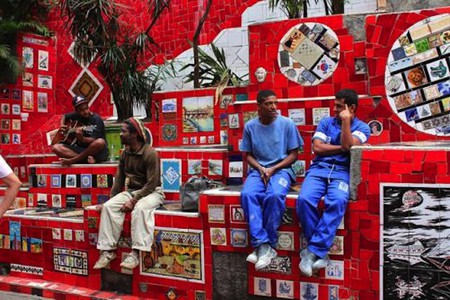 The staircase completely transformed the neighborhood. What was once a poor, run-down district is now a creative hub, brimming with visitors and even a setting for the Rio de Janeiro’s 2016 Olympic bid. Now restaurants and bars sit at the bottom of the steps catering to the many tourists who fill the area – all thanks to Selarón.

Tragically, in 2013 the artist was found dead at the age of 65 in front of his house on the very steps he spent 20 years of his life working on. The artist was said to have been depressed in the final months of his life, but had also been receiving death threats, possibly from someone who worked in his workshop. Immediately after his death, residents of Lapa, Santa Teresa and beyond came to pay homage, covering the bright steps with white candles. 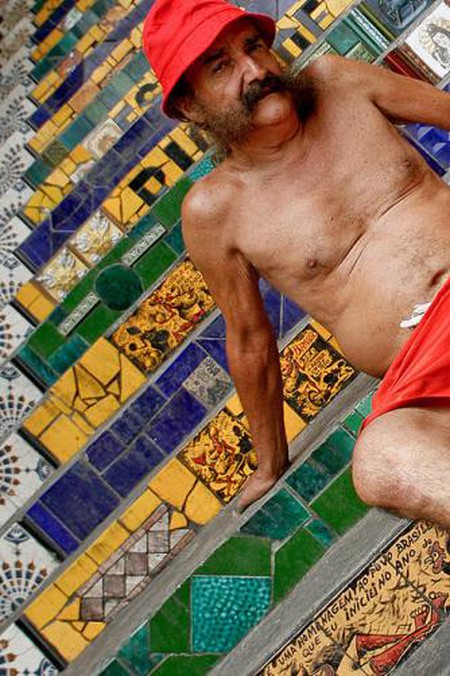 ‘I’m a genius!’ Selarón said on the subject, ‘I made the most fantastic staircase ever in the history of humanity. In Rio de Janeiro! Because it couldn’t have happened in any other city!’ Visitors could expect to see the eccentric artist with his big handlebar mustache resting or working on the steps, and always willing to have a chat.

In a strange twist appropriate for the artist, he had once written on a wall of the steps: ‘I will only end this crazy and unique dream on the last day of my life’. In any case, Selarón wanted his staircase to last a lifetime, a wish that was fulfilled for his, and will be fulfilled for many lifetimes to come.