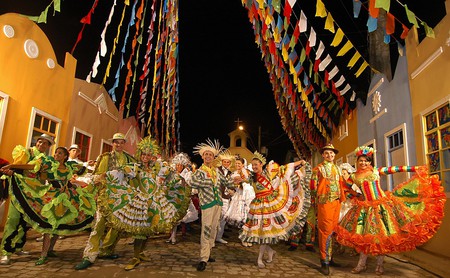 Forró is a genre of music that originated in northeast Brazil and has evolved to include many different musical beats and dance styles. Like the waltz, it is an intimate dance conducted in pairs. Culture Trip takes a look at forró’s background and explains how to enjoy it like a Brazilian. There are two theories to the origin of the name, forró. The first is that it comes from the word forrobodó which roughly translates to ‘great party’ or ‘commotion’. It’s believed the word was shortened to forró to describe parties that featured the specific music and dance. The most popular theory, however, is the story that has been supported from artists like Gilberto Gil. When the English engineers were building the Great Western Railway near Recife in the 1900s, they would often throw parties on the weekends. These parties were either for railway staff or open to the public, the latter being advertised as ‘for all’. Eventually, a derivation of the English words ‘for all’ became forró, and so was born the name of the popular northeastern music and dance.

Forró is commonly linked to the Festa Junina (June Festival), which celebrates the harvest and several Christian saints. Its popularity took over the northeast of Brazil, where it is still the number one music genre and dance there today. However, it is popular throughout the whole country thanks to the godfather of forró, Luiz Gonzaga, who spread the genre across Brazil. In the southeast, a modified version has settled in bars, dance halls, and parties known as college forró, includes influences of samba rock and salsa.

The music of forró is a harmony of three instruments: the accordion, the zabumba, and the triangle. The different styles of dances are intrinsically linked to the three styles of forró rhythms: xote, a slow-paced form of forró; baião, the original forró and the one found most commonly in the northeast; and, arrasta-pe, the fastest form of forró. From these rhythms come different dance forms.

Xote dance style is a classic left-left, right-right foot step whilst standing close to your partner. Another variation of xote is the universitario, which is similar to the classic xote yet with forward-backward moves and variations of sequences. The latter is commonly found outside of the northeast. Miudinho is another xote variation that has a lot of hip movement and intimacy between the pairs.

Baião is the original forró and has less movement than xote. Valsado is a form of baião which involves staying close to your partner so your bodies are touching while the legs are crossed over each other as they’re moving from side to side. Arrasta-pe is a fast version of xote and is breathtaking to watch.

The best way to experience forró like a Brazilian is to go to any nightclub or dance hall in the northeast of the country. Locals are open to teaching and guiding those interested in learning, so don’t feel shy having a go on the dance floor. Alternatively, take some classes to learn the moves. Dance CCC in Rio de Janeiro has regular forró dance classes in a relaxed, group atmosphere. Baillar Dance School in Recife, the home of forró, also offers the opportunity to practice the moves before heading out to a local club.