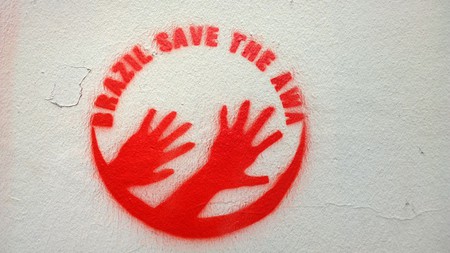 Save the Awá graffiti | © Denis Bocquet/Flickr

Deep in the heart of the Brazilian Amazon lives the world’s most endangered tribe, the Awá Indians. Constantly under threat from the ever-growing problem of illegal logging, which diminishes their natural hunting grounds, they are barely clinging on to both their nomadic lifestyle and their lives. The question is, with only around 300 of them remaining, how much longer can they survive?

Some 500 years ago, before the arrival of Portuguese colonialists, the Awá were a hunter-gatherer tribe living in small villages in Pará state – not deep within the Brazilian rainforest – where they cultivated crops. However, a series of chain reactions, including uprisings and revolts as a result of the Portuguese arrival, led them to migrate into Maranhão. It was there that they found themselves encroaching on the territory of another much larger tribe, the Guajajara, for which reason their ability to fully settle was disrupted once more. Ultimately, these events led to their adoption of the nomadic lifestyle that they still value to this day.

Awá Indians continue to value their homeland and their history though, wielding bow and arrows and treasuring the nature that surrounds them. In fact, they refuse to eat bats, hummingbirds and the sacred capybaras and have been known to keep orphaned monkeys as pets, even breastfeeding them as they would their own children. While some have chosen to take up residence on the protected Alto Turiaçu reserve, there are still handfuls of five or six who continue to live nomadically, disconnected from the rest of their tribe.

Throughout history, the Awá Indians have been the targets and blameless victims of numerous disasters. There was the smallpox outbreak that followed the arrival of the Portuguese settlers who enslaved them; the military dictatorship of 1964, which effectively wiped out indigenous peoples who refused to assimilate into modern Brazilian society; and the development of the railways that transport iron ore from the Carajas mines.

It’s this final threat that has really pushed the Awá to the brink in recent years, though. With the railway came settlers, ranchers and loggers who brutally murdered many indigenous tribespeople throughout the 70s and 80s due to land wars and even burned an Awá girl alive in 2011, a move which many interpreted as a heinous warning to the area’s indigenous communities. As Brazilian judge José Carlos do Vale Madeira astutely pointed out, the illegal logging industry is ‘a real genocide’ that does not just decimate forests, but peoples too.

Even though the National Indian Foundation (FUNAI) now somewhat supports the Awá, the funds are simply not enough to protect them from the threats of illegal logging, illness (around one in seven Awá has died of malaria in recent years) or tribal conflicts (they have been at loggerheads with the Ka’apor tribe for centuries). 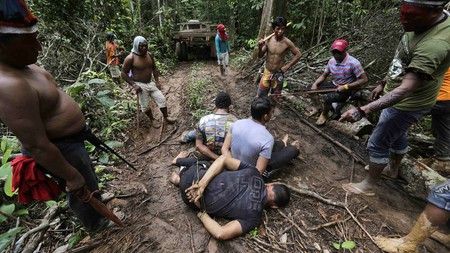 What can be done?

In recent years, the plight of the most endangered tribe on earth (according to Survival International, a human right’s group focused on indigenous tribes) has received greater attention on an international level, notably from campaigns backed by figures such as actor Colin Firth. This attention as resulted in some progress back in 2014, as the international pressure forced the Brazilian government to send in troops to remove illegal loggers from the Awá land.

Save the Awá graffiti | © Denis Bocquet/Flickr

However, for the continued survival of the Awá, many have warned that permanent land protection orders need to be put in place by the Brazilian government, especially given that the Awá land is amongst the most rapidly disappearing in Brazil. In fact, some 35% of their legally protected territory has been cut down, which says nothing for their territory that isn’t legally protected. Putting an end to this powerful and illegal Brazilian industry will be no mean feat, but the survival of the Awá Indians literally, and sadly, depends on it.