How Abraço Cultural is Helping Refugees in Rio de Janeiro 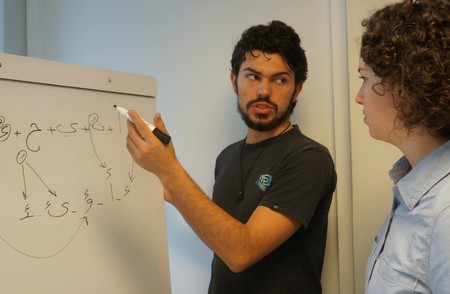 The refugee crisis has been well-documented, especially the thousands upon thousands of immigrants who arrive in Europe seeking a safe haven. Yet this is a global issue. There are currently around 7,700 registered refugees in Brazil, a number that grows steadily year after year. In the midst of this crisis are inspirational stories of humanity pulling together, and Abraço Cultural is one of them. A language school in Rio de Janeiro, it’s providing opportunities for Brazil-based refugees.

The idea of Abraço Cultural was born in 2014 when Atados, a social platform that connects people and organizations to build volunteer opportunities in Rio, organized a World Cup especially for refugees. A group of Brazilians watched the refugees compete at this special football tournament and were inspired. They felt Brazil needed a long-term project to help integrate refugees into society and allow them to start a new life. From this beginning, grew the idea of having a language school where refugees could share their languages and cultures to students. 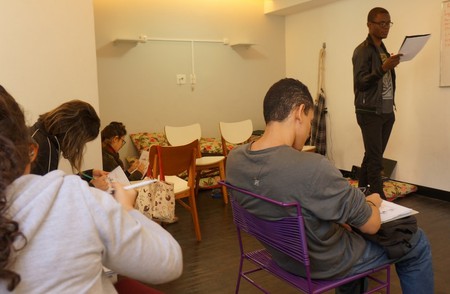 Abraço Cultural—meaning “cultural hug”—first opened in São Paulo where it worked out better than anyone could have hoped for. It later opened another school in Tijuca in Rio de Janeiro at the beginning of 2017. Tatiana Rodrigues, the coordinator of the Rio Abraço Cultural said, so far, the school has been a great success and courses fill up quickly. Not only has it provided some stability in the refugees’ lives, it’s also generating a steady income for them.

Rodrigues describes the refugees as having “enormous potential” as many speak three or four languages and have varied cultures and backgrounds to share. The students have been keen to learn not just new languages but also learn about their teachers’ lives.

Students can choose between studying French, English, Spanish, or Arabic, and there are currently around 400 students at Abraço Cultural in Rio. Many of the materials were made by volunteers and the teachers themselves. Before the school first opened in Rio, the coordinators had no space or office to work from so meetings were held at Lagoa lake or public parks to organize marketing, lesson structure, and photography. 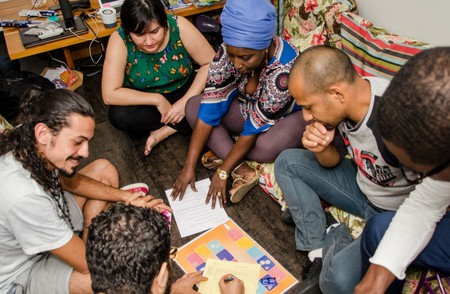 In Rio Abraço Cultural, there are currently 13 teachers from Morroco, Syria, Gambia, Democratic of Congo, Venezuela, and Haiti. Only one of the 13 was a teacher before coming to Brazil; the rest came from several different professional backgrounds. Before the refugees start teaching, they have to undergo a selection process to evaluate their potential as teachers. Once selected, they receive some training before teaching their groups of students.

“They were nervous on the first day and scared it wouldn’t work out,” reveals Rodrigues. “But the really cool thing is how interested the students are and it makes the refugees feel good that people want to learn about their culture, and not just the language.”

She went on to explain how the school helps the refugees by acting as a refuge. It helps them learn Portuguese, get work, and earn an income. On a personal level, it gives the refugees a sense of purpose that can help them come to terms with leaving their country behind. They also learn that people want to know who they are and discover more about them, which gives the refugees a confidence boost.

Once a month, the school holds a cultural workshop in Botafogo where the teachers and other refugees are invited to sell typical food from their countries and engage in a cultural exchange with visitors who come to buy their products. Not only is it a great opportunity for the refugees to socialize and practice Portuguese, it also provides another possible income stream. 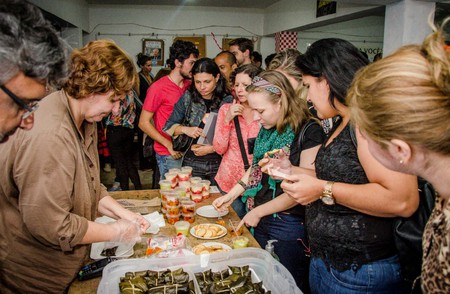 The school hires refugees from Caritas, a center for refugees in Rio de Janeiro. The non-profit organization is the first port of call for all refugees who arrive in Rio. It aims to help them integrate into society and provides them with a lawyer to help them get their refugee status.

“If they had a choice, they would prefer to be in their country, their home, with their family,” says Rodrigues. “But, unfortunately, they don’t have that choice. They each adapt in different ways. But they seem to like Brazil.”

Gustavo Martinez is a refugee from Venezuela and works as a teacher at Abraço Cultural. He left his country when his open disagreement to the current political situation left him in danger. Having worked as a Spanish and English teacher in Venezuela, working at Abraço Cultural in Rio provided him with some normality. “This great project changed my life here in Rio,” he explains. “Abraço Cultural gave us a job and the opportunity to socialize with the Brazilian people and tell the stories behind each refugee. The best thing about working on this project is that I can exchange my culture, starting with my native language. Besides, I was already working as a teacher and that really makes me happy.”

Ender Molina is also a refugee from Venezuela. “Abraço Cultural is simply incredible, a great support, a great tool, a light at the end of the tunnel,” he said. “It’s a great experience of inclusion and interaction that strengthens our connection with Brazil based on cultural exchange and knowledge.”

When asked what he hopes for the future, Molina replied. “I would like, in the future, to be able to work in my profession and live quietly, as a normal person.”