What do film director Guillermo del Toro, fashion designer Anna Sui and poet John Ashbery have in common? Answer: They were all inspired by the unique style of the Art Brut artist Henry Darger (1892 – 1973), a flesh and bone Oliver Twist who lived as an impoverished hermit and produced a compelling autobiographic body of work. 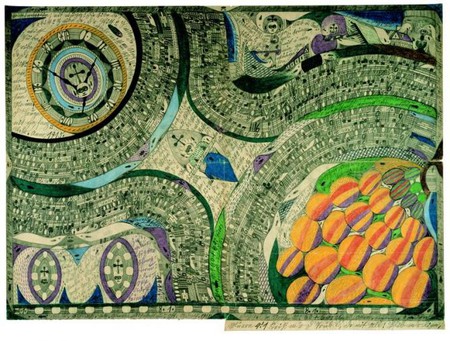 The term Art Brut (literally, Raw Art) was coined by the French artist and art collector Jean Dubuffet (1901-1985) to describe works created by people lacking in formal artistic training, who take as references their own self rather than conventions of classical or fashionable art.

Although Dubuffet’s category of Art Brut encompasses all artworks free from cultural influence, he in fact was fascinated by an obscure corner of this outsider art movement: works by people regarded as mentally challenged. Dubuffet urged people to interpret art through the detached-from-all-reality state of these marginal artists and not solely through Classical conventions: the polarization of perception could lead ultimately to reductionism and prejudice.

This is the hallmark of Dubuffet’s referential collection of more than 4,000 artworks donated to Lausanne, Switzerland in 1971 and in continuous growth: 400 artists have joined the collection since then. It proposes a rich, non-judgmental look at art and the discovery of a purely artistic, non-mimetic operation, the result of mysterious, primordial creative impulses.The collection includes the lifetime output of Henry Darger, whose fantastic visual narrative transformed him in one of the most prominent representatives of the Art Brut movement. 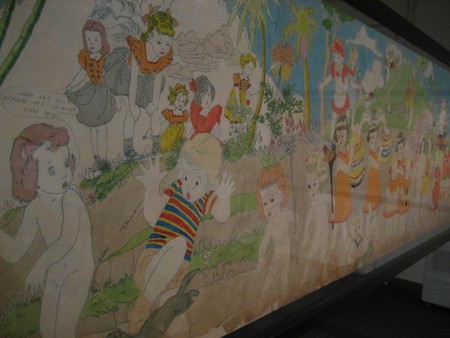 Darger created a rich imaginary world where girls and dragons intertwine and where adults massacre children. These images were formed from his own experiences, and fed by his painful journey into adulthood. After losing his mother at the tender age of four, he was interned by his abusive father in a psychiatric hospital, where he bore the brunt of all kind of aggressions, including sexual. Over a decade later, he escaped and walked for three days to reach Chicago, where he had formerly lived. There, he took a series of menial jobs that, despite the meagre salary, allowed him to reconnect to himself and soothe his battered soul through the creation of a masterpiece that would take decades to be accomplished.

Shortly before the artist’s death, the material was discovered by his landlord, the photographer Nathan Lerner, who was dazzled by what he saw. Lerner came face to face with a book written by Darger named “The Story of the Vivian Girls, in what is Known as the Realms of the Unreal, of the Glandeco-Angelinian War Storm, Caused by the Child Slave Rebellion” : with over 15,000 pages (against 2,400 for In Search of Lost Time by Proust, one of the longest books in literature) and over 300 illustrations (from small watercolors to 12-foot-long mural-size scrolls, often painted on both sides), the novel is the materialization of the secret life of Darger, a reflection of the incredible universe in which the artist evolved.

It tells the epic story of the “Vivian Girls” – Violet, Joice, Jennie, Catherine, Hettie, Daisy and Evangeline, seven little heroines who fight bloodthirsty adults. They unite with gentle, child-loving dragons, the Blengiglomenean Serpents, in a war against the Glandelinians, a race of fallen Catholics who enslave and torture children. The book has two alternative endings: in the first, the Vivian Girls are defeated; in the second they prevail and so do the Catholic nations of Abbieannia, Angelinia, Abyssinkile, Protestentia and Calverinia, but not before many children are tortured, mutilated and killed (an allusion to Christ’s death and subsequent triumph).

The illustrations show girls clothed in colorful dresses, bathing suits and pinafores, whereas others are represented naked. 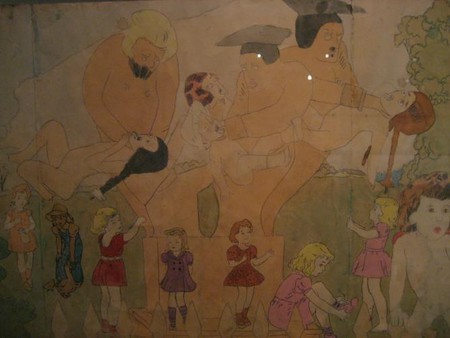 Some girls are depicted with horns and others have male genitalia. Some are disemboweled or strangled, tongues lolling out, desperate for the Vivian Girls intervention, while others enjoy the sunshine in halcyon landscapes. Darger’s work reveals a highly disturbing narrative that makes no concessions. It’s pure freedom, for better or worse.

Lavishly illustrated, The Realms of the Unreal is distinguished by the exceptional autodidact work on color and composition. The artist combined collage and painting to illustrate his subjects, overlapping them through the pages in a dynamic, immersive way: the girls seem to be really running, giggling, screaming. And we observe them as if watching a movie, anxiously waiting for the next scene of this hideous drama.

Darger, however, was not completely cut off from the world. The Realms of the Unreal is an unusual but faithful portrait of American society at his time, showing accurately its fears, values and trends.

Steeped in this zeitgeist, the epic of the Vivian Girls is composed of icons from popular culture for a good reason: its author was cutting, tracing and photocopying images found in magazines, children’s books and comics, coloring them afterwards.This appropriation and subversion of popular imagery is very similar to Andy Warhol’s approach, and the association with the master of pop art is unavoidable: the little girls are identical to each other but in different colored dresses, just like the subjects in Warhol’s serial silkscreen works.

Darger has been tagged a sadist, a religious fanatic, and the “Poussin of pedophilia” according to art critic Robert Hughes. We’ll never know for sure who he was on a deeper level. Despite the controversy and ultra-violence, his works ultimately championed children, giving them power and independence, showing compassion towards them. Perhaps through empathy he was seeking to reclaim his own childhood: what if he had had the strength to fight back?

The artist’s resting place seems to claim the last word: his modest headstone at All Saints Cemetery in Des Plaines, Illinois, is inscribed defiantly: “Artist” and “Protector of Children.” 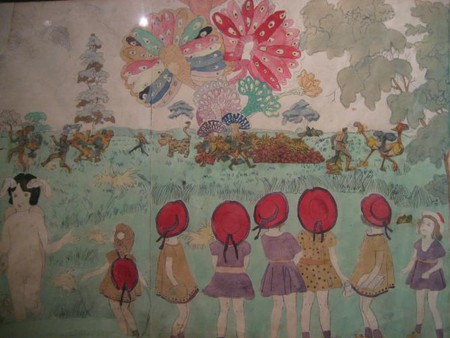 The works of Henry Darger can be viewed at the American Folk Art Museum, home to the single largest public repository of his works.