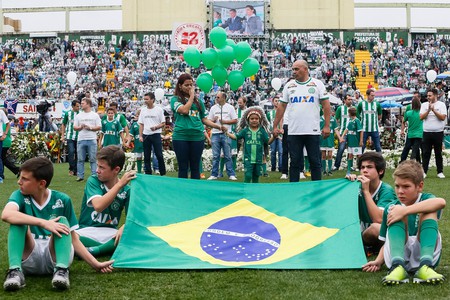 In November 2016, a plane carrying players from Brazilian soccer club Chapecoense crashed in the mountains of Colombia, killing 71 of the 77 people onboard and bringing the world of soccer to a standstill. Only three of the 22-man Chapecoense squad survived, with the club’s entire coaching staff, 20 Brazilian journalists and seven crew members also among the fatalities. Many thought it would spell the end of the club, who were faced with the huge task of building an entire team from nothing. However, six months on, Chapecoense are back. And they might just be better than ever.

Even though they’ve been forced to sign 25 players and bring in a brand new coaching team, Chapecoense have had an amazing start to the season, winning three of their first five games and finding themselves close to the top of the table, playing some of the league’s best clubs in the process. According to Chapecoense’s 35-year-old midfielder Odair Souza, the squad’s hard work and determination to restore the club is what has got them this far in such a short space of time. 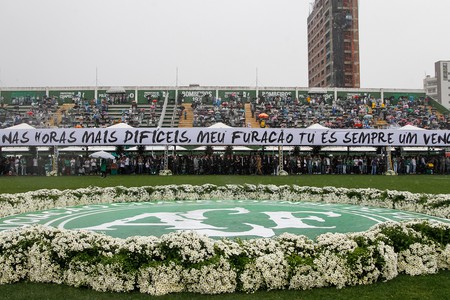 “To have come this far in only six months is really wonderful,” said Souza, who is better known by his nickname, Neném. “Everyone who came here, who accepted this challenge, did so with the same objective: to help rebuild Chapecoense. It’s so rewarding to see what we have achieved so soon after bringing a whole new team together.”

Neném is one of the few surviving Chapecoense squad members after last year’s air disaster. As he was injured at the time, he stayed in Brazil and did not travel with the team to Colombia. Having been at the club since 2009, he played an important part in Chape’s recent history and holds the honor of being the first and only player in Brazil to have represented one club in four different divisions.

After last year’s plane crash, it seemed Chapecoense’s rags-to-riches fairytale had met an unthinkable and tragic end. The club comes from the small city of Chapecó in the South of Brazil, and after being formed as late as 1973, for the longest time they were only the fifth-best supported club in their own state. However, over the last decade, with some smart financial management and the fervent support of their home city, Chape rocketed up the divisions and in 2014 won the right to play in Brazil’s top league. As recently as 2009 they were playing in the country’s fourth division, light years from where they find themselves today. 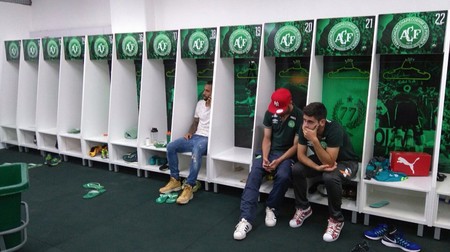 Over this time, Chapecoense became something of a second team for lots of Brazilian fans. As the only club in their city, they have no direct rivals or enemies, while the passion and devotion of their home support won them many admirers. It was the perfect underdog story.

Last year, Chapecoense had their most successful season in their history, reaching the final of the Copa Sudamericana, South America’s second most important continental tournament. They were due to play Colombian team Atlético Nacional in the final, but their plane crashed in the mountains south of Medellín on their way to the match.

The tragedy reverberated around the world. Social media was filled with heart-wrenching images of the players stepping onto the plane, of the team celebrating winning their place in the final one week before, and of Thiaguinho, Chapecoense’s 22-year-old forward, finding out he was going to become a father for the first time.

The end of the Brazilian soccer season was postponed and tributes were paid at some of the biggest sporting events in the world, such as the Real Madrid vs Barcelona El Clásico match. Out of solidarity, Atlético Nacional, their would-be opponents in the Copa Sudamericana final, handed the trophy to Chapecoense in memory of the victims of the crash.

The rebuilding process was difficult. The club had to hire an entire squad of players and hope they could quickly come together and play as a team. But, as incredible as it sounds, they managed it. Two months after the air disaster, Chapecoense were back on the pitch, playing in their local state championship.

“It was hard at first,” explains Neném. “We’re always used to being part of squads where the players have been together for years, but [in January] none of us knew each other. Thankfully, we were able to work through it and now we’ve got a really well-gelled squad. There is a great bond between us already.”

When the beginning of the national championship came around, other teams in the league got together and requested Chapecoense be made immune from relegation for at least one season. While thanking their peers for the gesture, Chape rejected this act of charity, determined to rebuild their club without any outside help. And so far, with one month of the Brazilian league played, it looks as if they won’t need any help.

In their first four games, they played Corinthians, Palmeiras and Cruzeiro – the last three Brazilian champions – as well as Avaí, the closest team Chapecoense have to a local rival. They won three of those games and drew one, putting them at the top of the league table.

Chapecoense still have a long way to go to fully get back on their feet. The Brazilian season has six months still to play, and it would be nothing short of incredible if this fairytale team were to keep this up until then. Judging by what the squad have shown so far, Neném is confident.

“We’ve got plenty of quality in our team and we’re a very tight-knit group, so there’s no reason why we can’t continue this good form. Our first objective has to be to remain in the first division, which in itself would be a huge achievement for Chapecoense. But, who knows, we could even go one better.”