Caetano Veloso and the Tropicalists: Constructing a Counterculture

In 1968, Brazil’s military police arrested the leaders of the Tropicalia movement. Led by singer-songwriter Caetano Veloso, the Tropicalists subverted the government with psychedelic clothing and electric guitars; from exile, their outlook guided Brazilian rock, pop and soul through the 1970s. Rowan Borchers discovers how this small movement transformed South American music. 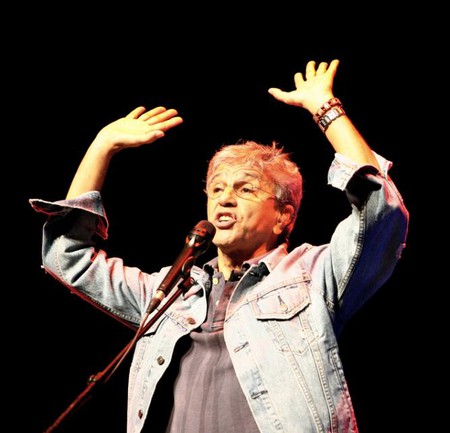 In September 1968, Caetano Veloso stepped on stage at the International Music Festival in Rio de Janeiro. Within seconds, the audience united in protest against the band, turning their backs on the stage and refusing to listen. ‘So this is what the youth is about, the youth that says it wants to take power?’ Veloso asked the crowd, ‘You understand nothing, nothing, nothing, absolutely nothing!’

The event was part of a public backlash against Tropicalia, an artistic movement which developed in Brazil around 1967. Led by singer-songwriters Veloso and Gilberto Gil, the Tropicalists were inspired by the flourishing international rock scene. Veloso supported ‘cultural cannibalism’, an idea of 1920s poet Oswald de Andrade: Brazilian art could ‘evolve’ by consuming global influences, from The Beatles to avant-garde jazz. In a culture wedded to bossa nova, salsa, and folk, this was a revelatory notion. The 1968 album Tropicalia featured artists who jumped between pop, soul, and jazz, and marked the beginning of a Brazilian counterculture akin to hippyism in the West.

From its creation, the movement was controversial. After 1964’s coup d’état, Brazil was ruled by a military dictatorship; most leftist musicians responded by performing traditional folk songs, to protest the rapid social changes brought on by the regime. The Tropicalists also opposed the government, but wanted to break from the stale tropes of the Left’s protest music. Veloso hated this ‘politically clichéd A-list samba with a slick feel’, preferring to adapt regional music to international trends. This style caused fury wherever Veloso performed. Footage from 1968 shows Veloso’s shocking abandonment of tradition: he dressed in space-age plastic clothes, with long hair and a bead necklace. What’s more, the backing band played electric guitars – an unforgiveable betrayal of the Brazilian sound. For many older musicians, the Tropicalists’ seemed like commercialised stooges of the American Empire.

Distrusted by left-wing cultural elites, and opposed by the ultra-conservative military government, the movement could not last. 1968 saw huge student protests in America, Britain, and France. Brazil also experienced unrest: Veloso and Gil attended the ‘March of One Hundred Thousand’ of June 1968, in which young people occupied the streets of Rio de Janeiro in protest at a student’s murder by the police. Months later, the Brazilian government launched a huge wave of censorship. Habeus corpus was suspended, political meetings were banned, and many government critics disappeared. Yet most left-wing musicians were untouched – instead, the military police focussed on rounding up the countercultural Tropicalists. Veloso and Gil’s cultural radicalism terrified the conservative government.

Caetano Veloso later wrote about his unexpected arrest in his autobiography, Tropical Truth. ‘The feeling that overcame me when I walked into the living room and saw the policemen was simple impatience: I foresaw a nuisance that promised to last at least a couple of hours… One of them made a suggestion that first seemed preposterous but then filled me with terror: You’d better take a toothbrush.’ Veloso was imprisoned for two months and beaten, then asked to leave the country. Veloso fled to London with Gilberto Gil, where he stayed for three years.

Despite the sudden end of Tropicalia at the hands of the police, Veloso continued writing. Based in a three-storey Chelsea townhouse, he released two English language LPs, Caetano Veloso and Transa in 1971 and 1972. Songs like ‘Asa Branca’ speak of a contradictory relationship with London; Veloso’s love of political freedom but constant homesickness:

over the dead trees

I promise you that then I’ll be back.

The exile of the Tropicalists also caused a surge of creative protest in Brazil. Inspired by Gil and Veloso, musicians developed new ways to dissent in an increasingly repressive nation. The lyrics to Milton Nascimento’s songs were banned by the military police, so he performed his songs without words, using his voice as an instrument. At the 1970 International Music Festival, just two years after Veloso was booed in the same spot, the winning performance was distinctly Tropicalist – a soul song by Antonio Adolfo and Tiberio Gaspar. Even football anthems became politicised: ‘Ponta de Lanca Africana’, performed by Jorge Ben, idolised a black footballer and became central to a movement similar to Black Pride in the USA.

By the time of Veloso’s return to Brazil in 1972, his internationalist outlook on music was ubiquitous. According to Lorraine Leu, author of Brazilian Popular Music: Caetona Veloso and the Regeneration of Tradition, 1970s soul, funk, and pop-rock all followed Veloso and Gil’s example. ‘The Tropicalist reclaiming of the dialogue with foreign genres was immediately evident in popular music during the following decade,’ she writes. ‘It has been an established dimension of Brazil’s popular music expression since.’

The Tropicalists’ influence far outlived the movement’s short existence in the suburbs of Rio de Janeiro. By the fall of the military government in 1984, the countercultural Tropicalists were part of Brazil’s cultural establishment. Gilberto Gil launched a political career, and was appointed Minister of Culture by President Luiz Inacio Lula de Silva in 2003; Caetano Veloso received an honorary doctorate from the Federal University of Bahia for the ‘grandiosity of his oeuvre and his renowned wisdom’. Yet without the original radicalism of the Tropicalists, contemporary South American music would be unrecognisable: Veloso’s 1967 call for ‘cultural cannibalism’ perfectly describes the distinctly global sound of Brazil today.