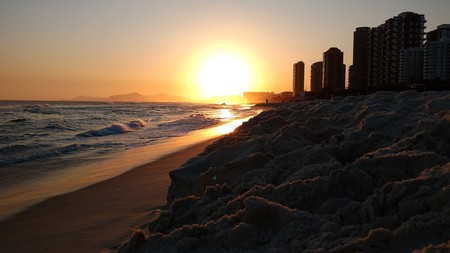 Whether you’re seeking a tranquil getaway or a buzzing atmosphere, calm waters to swim in or turbulent waves to surf on, Rio de Janeiro offers the perfect beach for all preferences and the best part is – no matter where you’re staying in the city, most of them are just a bus, subway, or tram away. Here are some of Rio’s best beaches that you can access by public transport.

Everyone seems to want a piece of Copacabana on the weekends as the sandy strip gets chock-a-block with sunbathers, sports fanatics, and beach vendors weaving their way through the hundreds of beach-goers. The result is a whirlwind of activity that brings life and energy to this world-famous beach and is set against the backdrop of people chattering and samba music playing.

Directions: there are three subway spots in Copacabana which will take you just two blocks away from the beach – Cardeal Arcoverde, Siqueira Campos and Cantagalo. There are also several buses that go to Copacabana and run along the neighborhood’s main streets Avenida Nossa Senhora de Copacabana and Rua Barata Ribeiro. 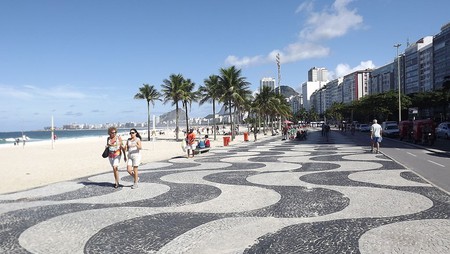 This beachy-cove sits in one of the most famous attractions in Rio – the Sugarloaf mountain. Despite its proximity to such an icon, this beach rarely gets overcrowded which makes it a picturesque spot to relax and take in the scenery. And what a scene it is – rusty-orange sand meets bottle-green water backed by sloping cliffs and thickets of vegetation and palm trees. The calm sea is the ideal place to swim, kayak and test your balance with stand-up paddling.

Directions: there are several buses that run to Praia Vermelha – just look for the ones heading in the direction of the Sugarloaf (or Pão de Açúcar as it’s known in Portuguese). 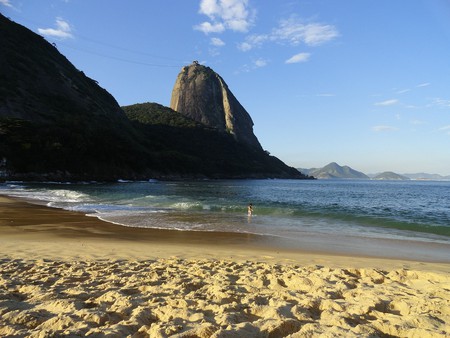 With pearly white sand and crystal clear water that looks straight from a postcard of a Caribbean resort, Arpoador is one of Rio’s most striking beaches and, tucked in the corner of Ipanema, it’s also one of the most accessible. Surfers head there at the crack of dawn to catch the early waves and later in the day it’s the beach-goers’ turn who come in droves to enjoy the calm, warm water and the powdery sand. If the turquoise sea and clean shore isn’t enough, there’s always the spectacular sunset just across the ocean next to the Two Brothers peaks.

Directions: take the subway to General Osorio and walk the two blocks over from there. 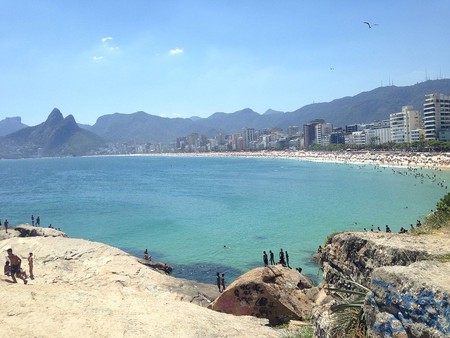 Just a few stops away from the South Zone of Rio (the tourist hotspot), is Barra da Tijuca, a large neighborhood known for its high-rise apartment blocks and abundance of huge shopping malls. Locally, it’s also known for its long stretch of beach providing miles of sandy shores to explore that rarely get crowded and also offer some of the best spots in Rio for surfing and kites-surfing. The beach is lined with kiosks and stalls that hire out beach umbrellas and sun-loungers.

Directions: take the subway to Jardim Oceanico (the final stop on the metro) and walk the few blocks from there. There are also several buses that go to Barra, just check any bus that runs from the South Zone to the West Zone of the city.

Located in the far west of Rio, Joatinga is one of the few beaches that’s far out of the tourist zone yet still accessible by public transport. The rest require some hiking to reach them. Joatinga ticks all the boxes – a white sandy beach edged by a bright blue sea, backed with rolling cliffs covered in vibrant green bushes. It’s also far enough away from the crowded hotspots in the south of the city for it to feel untouched and off-the-beaten track.

Directions: take the subway to Sao Conrado and from there get the 557 bus in the direction of Rio das Pedras. Get off at the end of the Elevado das Bandeiras road and walk just 10 minutes to Joatinga beach. 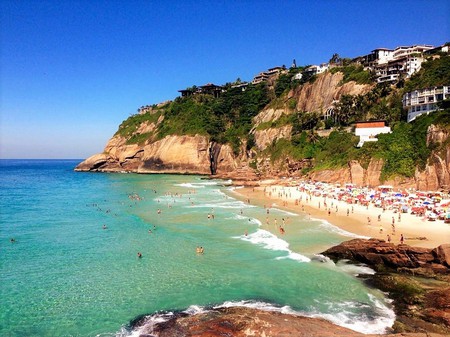 This small crescent of sand lapped by sky-blue waters is a well kept secret in Rio. Not far from the Vidigal entrance, it’s a popular beach among the favela’s locals yet anyone can go there and enjoy the peace and calm of the shore without the throngs of tourists and beach vendors. Semi-submerged rocks near the shoreline provide mini islands to play on and the views are wonderful with the high-rises of Leblon and Ipanema to the left and the endless ocean stretching out in front.

Directions: take the bus towards Vidigal (look for a bus that is heading along Avenida Neimeyer) and get off near to the Sheraton Hotel. Search for a small stairway near to the hotel that leads off the main road and follow it down to the Vidigal beach. 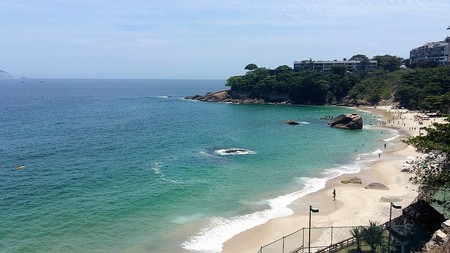 Far from the tourist south zone, Recreio shows a different side to Rio – a quieter, simpler and more laid-back approach to life. The area is mostly residential and its distance from the main Rio hubs means that the beaches remain untouched except for a few determined sunbathers and sports fanatics. It’s one of the best places to surf and kite-surf in Rio and the kiosks that line the sidewalk provide cold and satisfying refreshments.

Directions: take the subway to Jardim Oceanico in Barra da Tijuca and from there, take the BRT in the direction of Mato Alto. Get off near Recreio Shopping Mall and head in the direction of the beach. Pro Tip: there is also a wonderful viewpoint nearby called Pedra do Pontal. 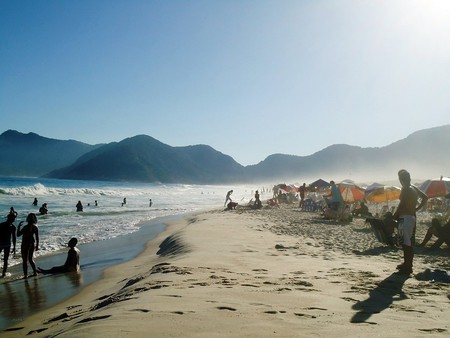