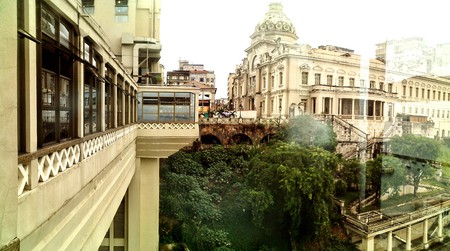 Many of Salvador’s architectural wonders are in its historic center, also known as the Pelourinho. Settled by the Portuguese from the mid-1500s onwards, it is a neighborhood built on riches from a bygone age. Its streets, which were given UNESCO protection in 1985, are lined with rococo-style churches, neo-classical palaces and stuccoed terraced houses painted in pastel colors. Follow our walking tour to take in some of its finest buildings and get a good feel for the city.

Discovered and settled by the Portuguese in 1549, Salvador da Bahia was the center of their empire in the Americas and capital of Brazil until 1763. The Bay of All Saints, on whose western edge the city sits, became a large trading port and a hub for Portuguese activities in West Africa and Asia. In 1558, they established the first slave market in the New World bringing millions of people to Brazil to work on the sugar plantations. The Africans who arrived in the city have had a profound influence and role in the history of Salvador. 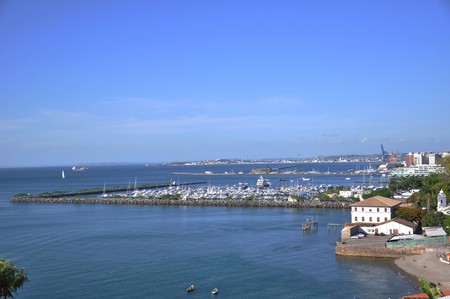 The first place to visit is where the actual pelourinho was. The words means “pillory” in English and it is where slaves were publicly punished. It moved between various locations during the time it was in use, finally ending up in the square of the same name, the Largo do Pelourinho. Today, the area and surrounding streets are lined with pretty, painted houses, shops and restaurants.

While you are there, you can stop to admire the Igreja de Nossa Senhora do Rosário dos Pretos. The pale blue church is another important place in the history of Salvador’s slaves. Built by the enslaved over many years from 1704, it was a place for them to worship and its name translates as the Church of Our Lady of the Rosary of Black People. Today its delicate façade, with two domed towers, white wreathed windows and ornate plaster work, peeks out from behind the railings that enclose its front courtyard. Inside there is a neo-classical altar and azulejos (Portuguese tiles) dating from around 1790.

Walking on, heading south up Rua Alfredo de Brito. At the top you will reach Largo Terreiro de Jesus, a grand square with a garden and impressive colonial buildings and churches surrounding it. It is known as the Land of Jesus because of the Jesuits who first had a small church on the site in the 1550s, and later a much grander one. The Catedral Basílica de São Salvador still stands at the north end today. It is made of Lioz, a kind of hard limestone, imported from Portugal and features large volutes either side of a central window and beside the two bell towers. There are three Jesuits saints in alcoves above the large panelled doors. In the square, note the wavy design made out of small grey and white stones that are similar to the Copacabana beach’s famous promenade in Rio.

From the front of the cathedral, take Praça da Sé street and walk the short distance until you see Rio Branco Palace shimmering white at the far end of the square. The palace, which was completed in 1549, was the state government’s seat. It has also been used as a prison and by the military, but is now open to the public. The building is 4,500 square meters and having survived various attacks and reformations, it embodies a number of eclectic styles. In 1919, it was given a new central cupola that tops its glass-windowed front and an Italian artist, Pasquale De Chirico, added sculptures to the façade. 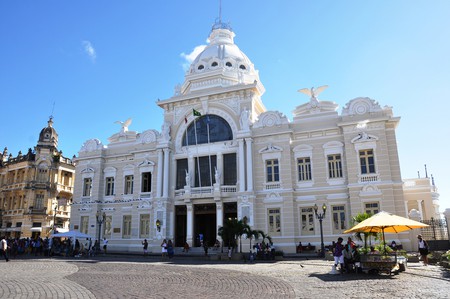 From outside the palace, you’ll notice that part of the city lies at a much lower level to the Pelourinho. The cidade baixa is at the bottom of an 85-meter escarpment. In 1873, Elevador Lacerda, the first urban lift in the world, was installed to connect the higher and lower parts of Salvador. A 1930s art deco version stands today, taking 900,000 people up and down per month in just 30 seconds. Two towers, one with the lift inside, are connected by a glassed walkway with unadulterated views of the lower city and the bay. 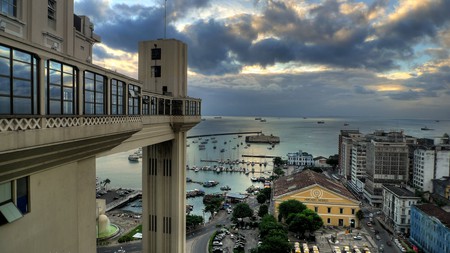 From up here you can see the cylindrical Forte de São Marcelo about 300 meters out sea. It is based on the design of the Castel Sant’Angelo in Italy and Portuguese São Lourenço do Bugio forts and built on reefs. Its circular walls protect if from attack on any side. Internally it consists of a low central tower, ten meters of surrounding patio and the outer perimeter building. There is a cistern, dungeon, chapel and gunpowder warehouse under the central tower. The fort has been the city’s first defense since the original one was competed in 1623. 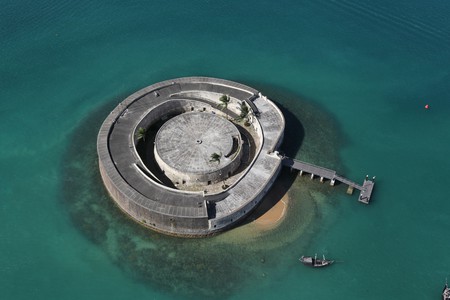 At the bottom of the elevator, you will arrive on Rua da Conceição da Praia. To the right, across Avenida Lafayete Countinho, is Salvador’s Mercado Modelo. The building is a former customs house dating back to 1861, which now houses over 250 market stalls selling handicrafts from Bahia and Brazil. Square in shape with a semi-circular add-on at its north-eastern end, it has been protected by IPHAN, Brazil’s Institute of National Historic and Artistic Heritage, since 1966. Inside, you can view its high, wooden-clad ceiling and domed archways, before browsing the wares on offer or enjoying a cold beer.