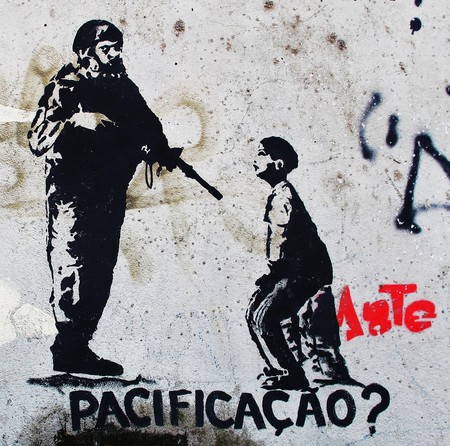 Since the Brazilian government decriminalized street art in 2009, a wave of street artists turned to the city to mark their artistic license on the gray canvases of Rio de Janeiro to give some color to urban life. The result has been outstanding; every neighborhood throughout Rio has incredible street art and some of these artists have even made an international name for themselves. Some graffiti tells a story of a historical event or highlights social problems, such as images that popped up during the 2014 World Cup. Others are there simply because it’s pretty, cool, or meant something to the artist that he or she kept for themselves. Here, we scratch the surface of some of the art in Rio de Janeiro, neighborhood by neighborhood.

The graffiti of the tram in Santa Teresa has a historical tie — the tram used to have an important role in the day-to-day lives of people living in the region, allowing them to get up and down the steep hills of the neighborhood. The bondinho (as the tram is known) was closed in 2011 due to two serious accidents — one where a French tourist fell out and died and another where the tram derailed and killed six people. The closure caused an outcry and it was only this year that it reopened.

The street art in the city center depicts various events and images from rural life and slavery, including the new street mural ‘Etnias’ in Rio’s downtown by Eduardo Kobra. This street mural was commissioned as part of the Olympics and represents five indigenous tribes from five continents. It was noted by the Guinness Book of World Records as the largest street mural in the world.

Botafogo has an abundance of street art, yet most of it is created by artists looking for artistic expression without underlying meanings of historical events or social issues. The result has created fascinating and beautiful designs that transform bland urban surroundings into works of art. Botafogo is creative, fun and impressive.

Jardim Botânico has long attracted artists and creatives. Its close proximity to the Tijuca and Atlântic forests seems to have given the neighborhood an inspiring air. There are many design workshops within the area, from clothes to pottery, as well as the Art School in the beautiful mansion of Parque Lage. All of these creative juices flowing has made some of the city’s most beautiful and imaginative street art.

Marcelo Eco is a graffiti artist from Rio de Janeiro that has had international success with exhibits in Paris, Spain and Argentina among others. His trademark and brand character is ‘Pointy Chin,’ which is a face that is also known as ‘Dali’ for resembling the appearance of the famous artist Salvador Dali. This graffiti can be found all over Rio de Janeiro in various forms and is especially noticeable on the main street in Copacabana, Avenida Nossa Senhora de Copacabana.

Oraculo Project is an annoymous graffiti artist whose main aim is to spread love and warm messages throughout Rio by using stencils on the floor. The messages are often side by side in Portuguese and English to be easily accessible for everyone. The artist is also responsible for coloring cut tree trunks red in a project known as ‘Bleeding Tree’ that aims to highlight the destruction of trees for urban developments. There is a message right in front of Arpoador rock that says ‘Stop here, appreciate life for a minute and smile.’ With the spectacular view there of the sea, it couldn’t have been better placed.

The FIFA World Cup 2014 was met with disapproval, outrage, anger and protests from the Brazilian population due to immense government overspending that citizens felt should have been channeled into education, health care and security for the country, rather than for an event. Whilst there were active and at times, violent protests, there was also passive yet powerful street art that captured the general feeling in a creative way, such as an image of Neymar (Brazil’s beloved football player) in a stadium seemingly about to kick the head of a FIFA official instead of a ball. Others were much more straight to the point, such as the stencils of ‘FIFA Go Home’.

Another World Cup related artwork shows Neymar again this time shooing away the ghost of Maracanazo. Maracanazo is the term for Brazil’s defeat in 1950 against Uruguay in the World Cup final; it was a black mark in football history for Brazil.