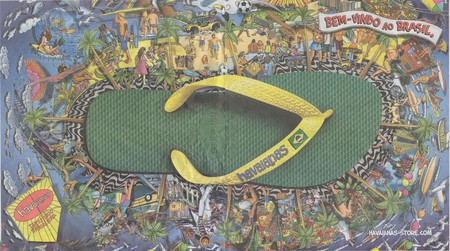 An advert for the iconic Havaianas

Havaianas have opened their largest flagship store in the UK, located in Westfield London. The moves marks the next step in the flip-flop brand’s global expansion plans. “As we grow into a global company it’s great to be positioned next to leading fashion and lifestyle brands,” Merel Warners, Havaianas’ marketing director in the EMEA region was quoted by Footwear News as saying.

The extent of Havaianas’ reach is remarkable, their products now sold in over 80 countries worldwide. Versatile as the flip-flop may be, the success of the summery shoe was not inevitable. 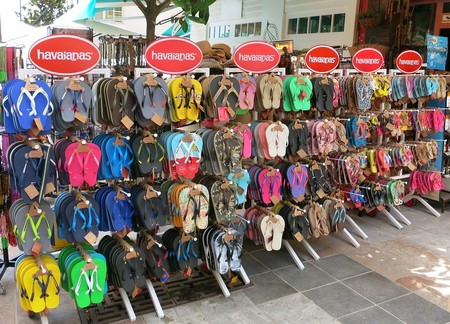 Choose your favourite: havaianas are here to stay

Havaianas was founded in São Paulo, Brazil in 1962. Their name taken from the Portuguese word for Hawaii, with the design inspired by the Japanese zōri sandals. Originally made from straw, the simple and cheap wares (first priced at just $2) were quickly adopted by local factory workers. Throughout the 1960s new colours were introduced, which included brown yellow and green and the scale of the operation heightened.

In the 1970s, their popularity widened as young hippies also began to flaunt the flip-flops. After a wave of fake Havaianas came onto the market, a report was put out by the brand stating that real ones “don’t smell and the straps don’t come loose”. A veritable test of authenticity.

The time has finally come: feet from all over the world are walking around Rio. #Havaianas #MadeinBrazil #Rio

For a while their utility proved to be their Achilles heel. As Brazil’s economy skyrocketed, the relaxed and basic nature of the flip-flop was considered unglamorous. According to Business of Fashion, the mid-1990s saw sales dive from 100 million to 65 million pairs a year.

But in the 2000s, a smart marketing ploy that involved product placement with high-flying models such as Gisele Bündchen and other Brazilian celebrities put the humble flip-flop back on the fashion’s front line. The brand even enjoyed a collaboration with Italian fashion house Missoni. Popularity for Havaianas soared again, even while Brazil’s economy stagnated.

In the summer of 2016, the Olympics are giving Rio a chance to present a new narrative to the world. Yet Havaianas’ expansion sees the Brazilian-based label minimising risk by increasing their market share outside of their homeland. The new opening at Westfield accompanies new store openings in Barcelona, Rome, Porto and Mallorca. To ensure a captive audience – and to counter the unreliable European weather -Havaianas has also opened up their offering to include shoes and leisurewear.

With a tag line that reads “You can’t buy happiness, but you can buy Havaianas”, success, though not guaranteed, seems highly likely, as weather-beaten Brits – amongst others – clamour for a slice of that sunshine feeling.

Havaianas store at Westfield Stratford is open 10am – 10pm Monday – Saturday, 10am – 6pm on Sundays