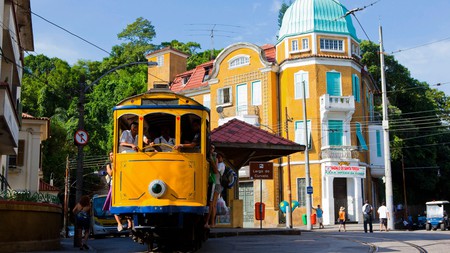 Stroll through the winding streets of Santa Teresa and its oft-heard description rings true: this bohemian region of Rio de Janeiro is the work of the artists, writers and musicians who live there and have transformed ageing mansions into creative studios and artistic hotspots.

This captivating hillside neighborhood overlooks downtown Rio, and highlights the many facets the city has to offer in addition to beachside antics. The area is dotted with 19th-century mansions – some crumbling wrecks, others carefully preserved in their former glory – which serve as a reminder of the Santa Teresa economic boom. In the 1800s, it was mostly unreachable, with a few farms and a forest refuge for escaped slaves, but the coffee industry golden days brought rich industrialists to the hills, along with their boastful mansions. Nowadays, it’s an artistic retreat and a popular tourist area.

Head to Largo dos Guimarães, which is the main square in the center of Santa Teresa. It’s also the drop-off point of the famous bonde (tram) and a key meet-up spot. From here, some of the best bars and restaurants in the area are just a short walk away.

Black-and-white photos of famous musicians, colorful posters and indigenous handicrafts line the walls of Bar do Mineiro, one of the most beloved Brazilian restaurants in Rio. Try the feijoada for a taste of classic Brazilian food, and wash it down with a strong yet tasty caipirinha.

After eating, head to Explorer Bar for gorgeous cocktails that excel in both taste and looks. Then move on to Mercado das Pulgas, which has roda de samba (live samba bands) on the weekends, attracting a young party crowd. 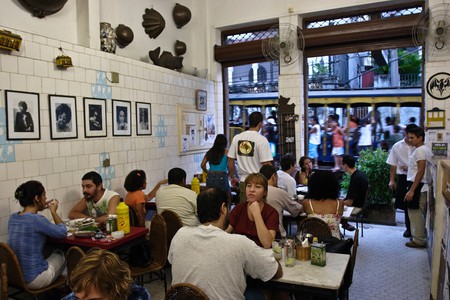 Parque das Ruinas, a public park that includes the skeleton of an old mansion, offers wonderful views of Guanabara Bay. The site is also an important cultural center, with theater, circus and music programs taking place throughout the week. The Museu da Chácara do Céu holds a small yet comprehensive collection of art, including both national and international works, as well as vintage Brazilian memorabilia. In October, Santa Teresa hosts the Arte de Portas Abertas, a weekend event in which local artists open up their homes and studios in an open-air exhibition. 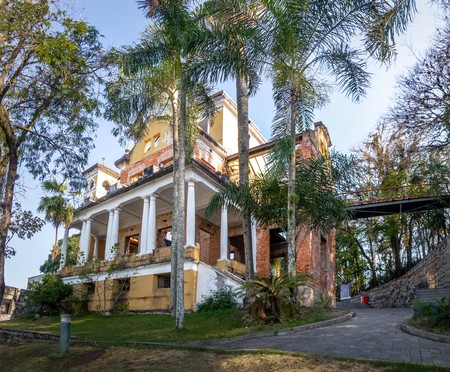 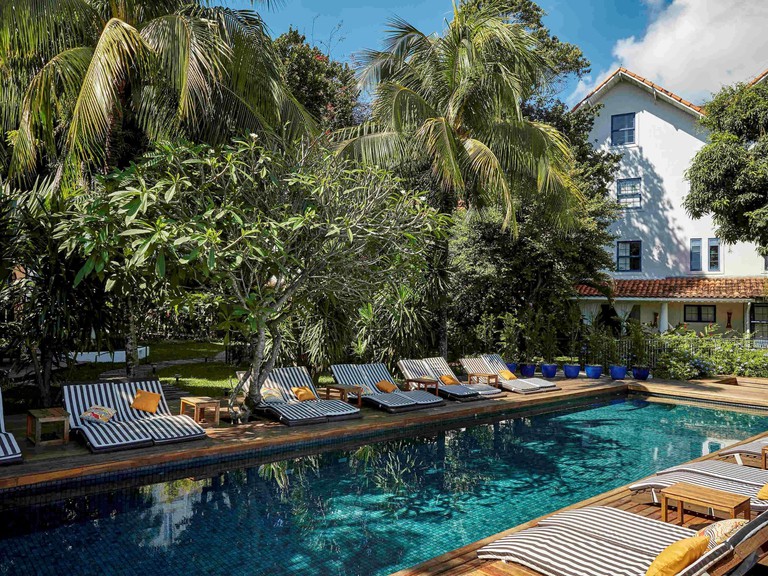 Courtesy of MGallery Santa Teresa Hotel / Expedia
This hillside hotel occupies a former coffee farm dating from 1850, and you’ll see reminders of the earlier incarnation throughout the swish, updated interiors. Much of the decor is inspired by the golden era of coffee and cocoa, together with traditional Brazilian materials such as tropical woods and banana fiber. Added to this are five-star features, such as spa treatments and a rooftop pool with spectacular views over the neighborhood. Many guest rooms share this lovely vista from their balcony, too – best enjoyed over a cup of steaming coffee. 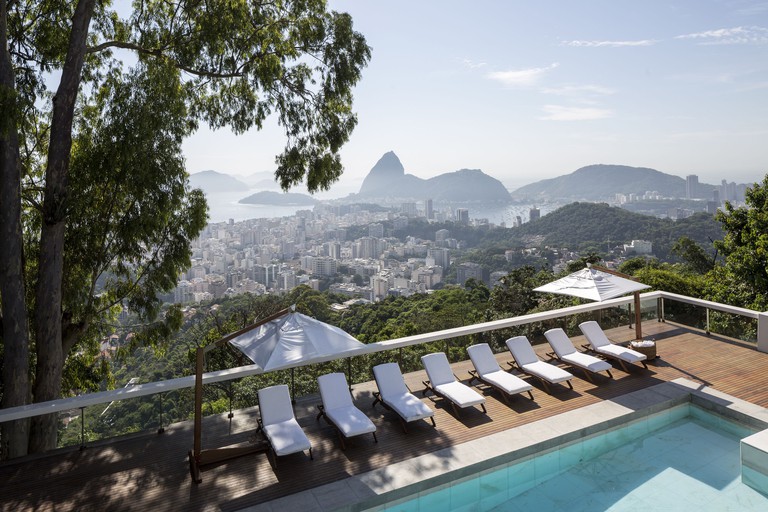 Courtesy of Vila Santa Teresa / Expedia
You won’t find anywhere in Santa Teresa with more eye-popping views over Rio than this hotel on a lush hilltop bordering the Laranjeiras neighborhood. Enjoy Sugarloaf Mountain vistas from all over the property, from your poolside lounger and – in many cases – without even getting out of bed. You’ll find them from the terrace, too, as you dine on French and Brazilian fusion cuisine. Alternatively, escape to the spa for a holistic therapy session. 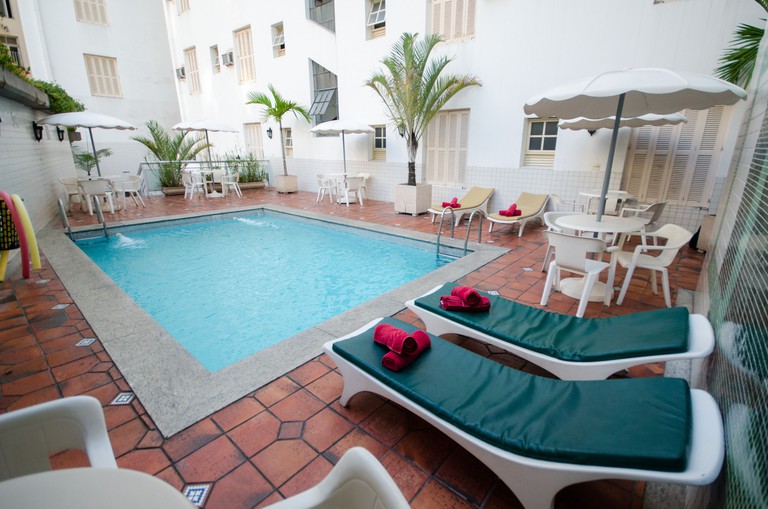 Courtesy of Hotel Monte Alegre / Expedia
The Monte Alegre is an easy-on-the-budget hotel, housed in a wonderful piece of elegantly restored architecture, smack dab in the center of Santa Teresa. As well as being surrounded by numerous bars and restaurants, you’ll find top attractions such as the Metropolitan Cathedral and Carioca Aqueduct within walking distance. After a day exploring, cool off in the hotel swimming pool before retiring to your room – ask for one with a balcony for views over the neighborhood. 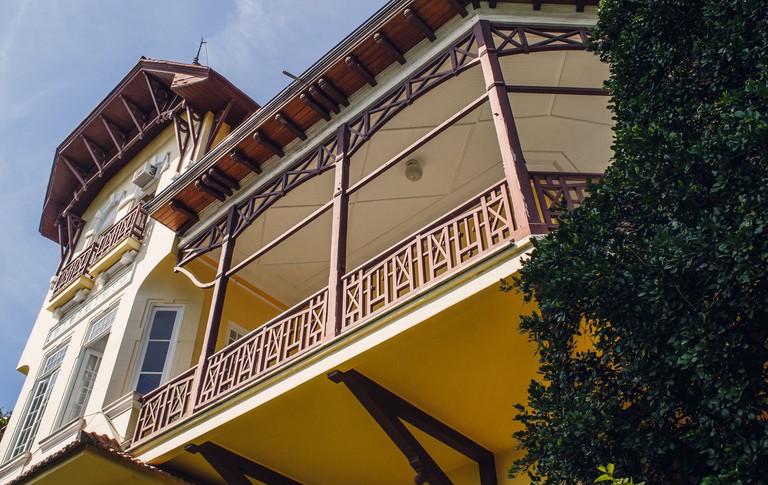 Courtesy of Villa Alexandrino / Expedia
Set on a steep leafy hillside in the south end of Santa Teresa, Villa Alexandrino is an elegant late-19th-century building with oodles of historic charm. The house is filled with flamboyant neoclassical flourishes, colorful murals and striking architectural elements such as a stained-glass ceiling dome and sweeping staircase. There’s also a secluded swimming pool, large enough for a few strokes, and many of the characterful guest rooms provide sweeping views over the Rio metropolis.

Vila Galé Rio de Janeiro for nightlife on your doorstep 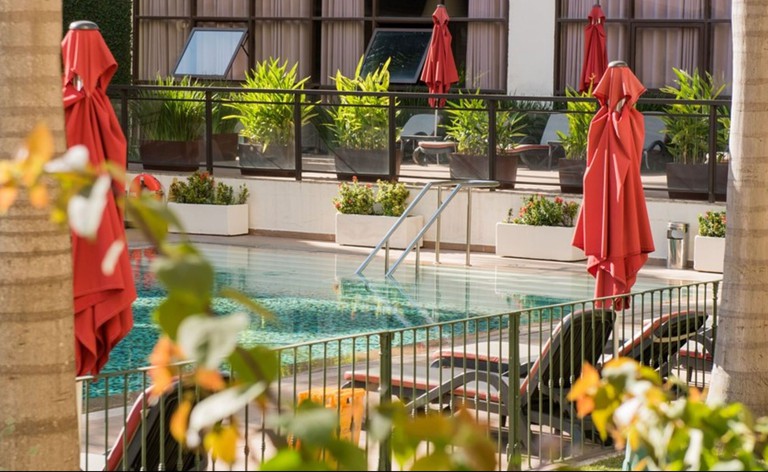 Courtesy of Vila Galé Rio de Janeiro / Expedia
A pastel pink facade awash with classical elegance certainly grabs your attention at the Vila Galé Rio de Janeiro. Located where Santa Teresa meets the colorful Lapa district, it’s a lively part of town, full of live-music clubs and bars. The hotel is split in two, with the more palatial accommodation in the 19th-century palace wing, and a 13-story tower housing more modern rooms. A palm-lined swimming pool is long enough for your morning laps, and there are plenty of poolside sunbeds for daytime lounging. 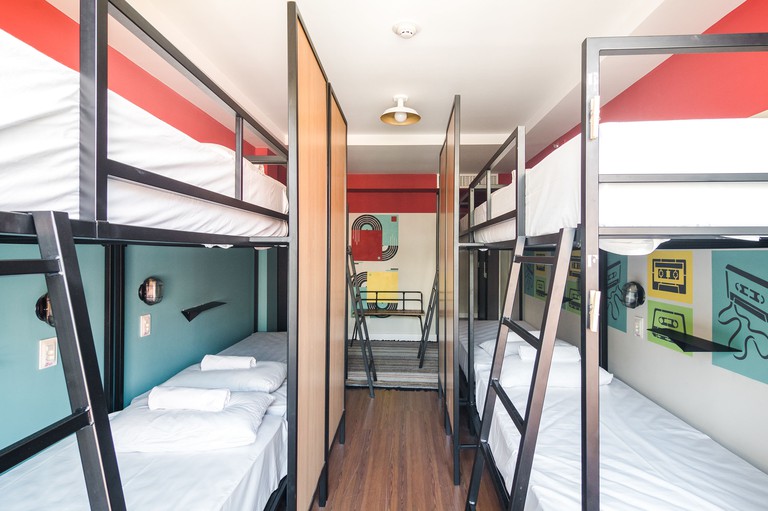 Courtesy of Selina Lapa Rio de Janeiro / Expedia
While its fabulously ornate historic architecture suggests otherwise, the Selina Lapa is a budget-friendly hostel, chock-full of hip and youthful attitude. Passing through its corridors are a mix of international backpackers, creatives and local musicians arriving for sessions with the in-house radio station. Choose between shared dorms or private rooms; if you’re up for a drink and a mingle, sunset at the rooftop bar is the time and place to do it.