A History of Sprinting At The Olympics 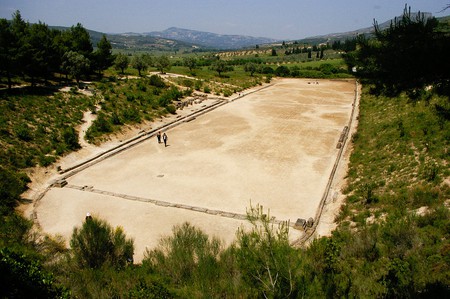 Running is one of the simplest competitions in the history of mankind. No team is needed. No expensive equipment is required. It’s one person against at least one other competitor.

That’s why running, especially sprinting, has been part of the Olympics since their inception.

The stadion, named for the facility in which it took place, was simple: run the length of the arena, which was approximately 200 yards (180 meters). Since then, sprinting has evolved and grown immensely since the first barefoot and naked competitors ran the stadion on that exposed ground.

Not only have the events changed, but the format has evolved as well.

Ropes were used to separate sprinting lanes. Sprinters first started races standing straight up before utilizing the crouched position. Synthetic tracks came into use in 1956. Starting blocks only arrived in 1984.

Tracks have improved, apparel and shoes have gotten lighter and more streamlined, and as a result of these improvements coupled with new training techniques, sprinters have gotten faster.

Thomas Burke (USA) won the first-ever 100-meter dash in 12.0 seconds at the 1896 Games in Athens. The times would only lessen from there.

In fact, the eight men in the 2016 Olympic final had times of 10.06 seconds or better, which trump Burke’s mark from 1896 by a whopping two seconds — a lot in sprinting!

Bolt has become the standard bearer when it comes to sprinting. He is regarded as the fastest person ever timed. His 100-meter time of 9.58 seconds set at the 2009 Track & Field Championships in Berlin is the world record. He is the first man to hold both world records in the 100m and 200m since fully automatic timing became mandatory.

He can (again) write his name in the history books with a gold medal in the 200m final Thursday. Bolt would become the first athlete — male or female — to win three-straight Olympic gold medals in the event.