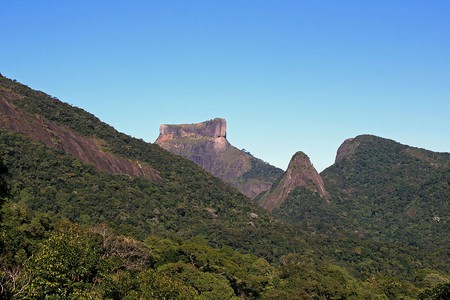 The huge jungle that sprawls outwards from the heart of Rio de Janeiro and into the surrounding areas is known as the Tijuca rainforest and it makes up part of the larger Atlantic rainforest that runs from the south of Brazil to the north. Its incredible biodiversity is reason alone to visit, yet it keeps on giving with dozens of waterfalls, viewpoints, hikes, peaks and monuments.

Tijuca rainforest is quite possibly the largest urban rainforest in the world. We say quite possibly because it remains in dispute with the forest in Johannesburg in South Africa that also claims to be the biggest. Whether it’s the largest or second largest doesn’t change the fact that it is huge, spanning a region of 32 squared kilometers. It’s also influential in the geography of the city itself, separating the west of the city from the north, south and central areas, as well as dividing the north from the south.

It was only recently that Tijuca rainforest was declared a national park in 1961. It used to be a larger part of the Atlantic Rainforest before it was cut down and redeveloped for coffee and sugarcane production. In the second half of the 19th century, it was replanted by Major Manuel Gomes Archer to protect Rio’s water supply which proved to be a successful effort. Its current status as a national park will ensure its protection for generations to come and it won’t suffer the same destruction it faced many years ago.

Considering that it’s a man-made reclamation of land, its richness in biodiversity is extraordinary. Its vegetation is so dense that scientists have calculated that the forest has reduced the temperature in the surrounding areas by a mind=blowing nine degrees celsius! This collection of hundreds of plants has given home to hundreds of different species of animals, many that are unique to the area and are facing extinction. 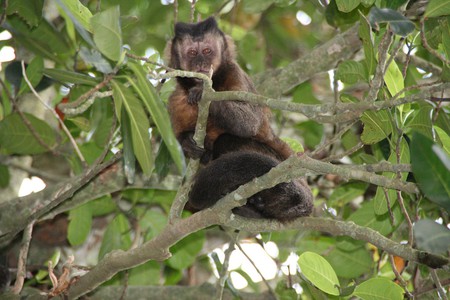 It’s not just plants and animals that live in Tijuca rainforest. There is one favela that’s located at the heart near to Alto de Boa Vista, with many residents there descendants of the group that helped with the replanting effort. Whilst conditions are improving in this favela, it still has an adverse effect on the forest due to its contribution to environmental degradation.

The most famous monument in Brazil stands proudly overlooking the whole forest; Christ the Redeemer. Perched up high on Corcovado mountain, it’s accessible either via a small train that snakes up the mountain or there’s a trek up to the top which is a great excuse to see the forest up close and visit the famous statue at the same time. The entrance to the trek starts just behind the Parque Lage, an elegant mansion-turned-art school, and is about 50 minutes to the top with plenty of butterflies, monkeys, shy lizards and exotic plants to see. 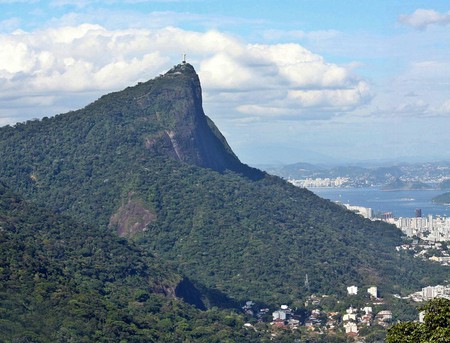 Tijuca also has 30 waterfalls within its depths, the most famous being Cachoeiro do Horto. The entrance is next to the road that goes through the forest and beyond the entrance is a short hike to the waterfall. The cascading water is relatively high yet not powerful, making it perfect to take a cool, refreshing shower under. The pool in front is shallow enough to sit inside and lounge the day away in a natural bliss. Another well-known waterfall is Cascatinha waterfall, famed for its beauty and peaceful surroundings. 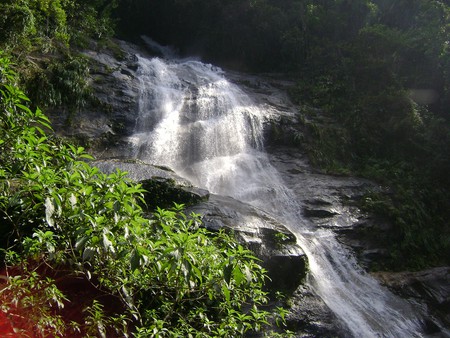 Three of Rio’s most famous peaks count their home as Tijuca forest and these are Pedra Bonita, Pedra da Gavea and Pico da Tijuca. All three climbs offer wonderful treks to the summits and indescribable views over the rainforest and the city itself. Pedra Bonita, with its wide, open surface, is the base point for hang gliding. This relaxinf flying activity is a great way to get a grip on the size of the forest in relation to the city. Yet to truly see the rainforest in all its glory, the view from Pico da Tijuca is unbeatable. Located in the heart of the jungle and being the highest peak there, it’s hard to find a better view without taking your feet off the ground.

As well as natural attractions, the rainforest is also studded with a few man-made objects of interest. One of the most picturesque is Vista Chinesa where a oriental-style gazebo looks down upon a wonderful view of the Lagoa, the forest and Rio’s beaches. It’s recorded that the Vista Chinesa took its name from the Chinese farmers bought to Rio in the beginning of the 19th century to plant tea there.

Another fascinating structure is the Mayrink Chapel, a small, pink chapel that has stood the test of time in the forest since 1860. At the altar inside are murals and paintings by Brazilian artist Cândido Portinari, a prominent and influential practitioner of neo-realism style in his art. Further down the narrow, winding road through the forest is the Mesa do Imperador (The Emperor’s Table) where Brazil’s last emperor, Pedro II, took his court for picnics in this picture-perfect spot. 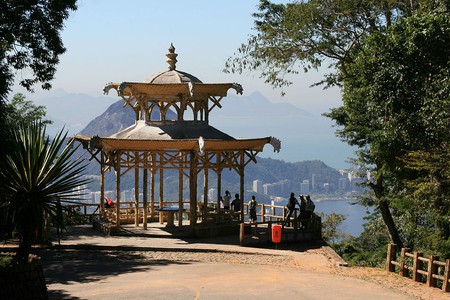 Whilst the road that curves through the forest is safe, it’s recommended to explore with a guide to see as much as possible and to avoid getting lost. There are many excursion tours for tourists throughout Rio de Janeiro that can offer tailor-made plans to see the Tijuca rainforest. Whilst it may not have its sister the Amazon forest’s wilderness and such exotic animal species, Tijuca forest certainly holds its own in charm, beauty and splendor.