A Guide to Dressing for Carnival Like a Local 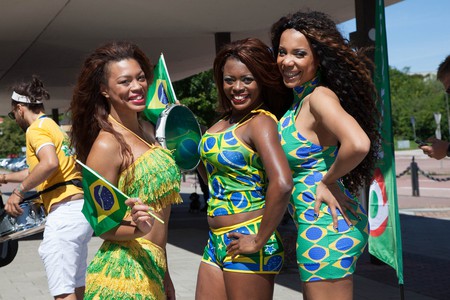 If you’re in Brazil and you’re going to Carnival this year, then you might be wondering what (and what not) to wear during the parades and the street parties. This guide will tell you everything you need to know to make an impression – in the best possible way.

The official parades take place at the Sambodromo, where the largest samba schools in the city come together to compete, hoping to be crowned the winner of this year’s Carnival. What you wear to the parades depends on what your role is there. As a spectator in the stands, colorful, light, casual clothing is the norm. If you’re participating in the parade itself, the school will provide a costume that is custom-fitted and designed based on their Carnival theme. Each school has its own signature style, but some characteristics are present in all the costumes: color, flamboyance and jaw-dropping beauty. 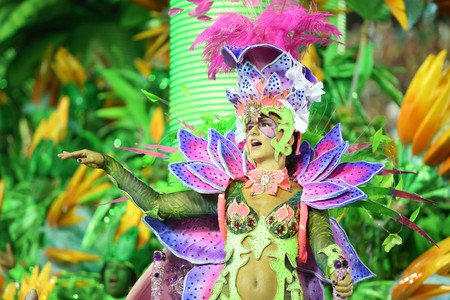 The official parades are usually more appealing to the tourists, whereas as the locals tend to stick to the street parties, known as blocos. Blocos fill every corner of the city during the week-long carnival, with a van or float slowly ambling along a predetermined route, blasting out plenty of samba to the huge following crowds. It’s here that individual creativity comes to life, and costumes range from the simple to the astonishing. Here are some tips for dressing like a local during the street parties:

Leave the Hawaiian Shirt at Home

Known affectionately as the gringo look, the combination of Hawaiian shirt, straw hat and sandals should be avoided. Most men go to blocos in a vest top or topless, and with the sun’s intense summer strength and the added body heat from the crowds, the less you wear the better. 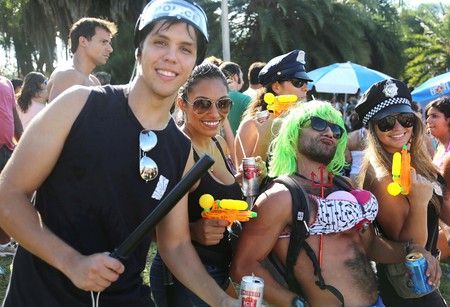 Go to a bloco in jeans or trousers and you’ll be regretting it the whole day. The blocos get hot, especially if you’re in the middle of the crowd. Men usually wear bermuda or boardie shorts and go topless, and the women often wear short shorts and a bikini top.

Carnival is a time to let your hair down and go with the flow in a week long, liberal party. For single people, carnival is a time to meet other people, and dressing sexy is part of the fun. The ‘less is more’ approach already gives proceedings a sensual air, but many up their game with additional sexy costumes. Cariocas (residents of Rio) prepare for months in advance for Carnival with Projeto Verao (Project Summer), a term for the weeks of dieting and working out that many go through to get a strong, fit body ready for showing off at the street parties. Expect to see a lot of beautiful people during the parties.

Fancy dress is one of the most common outfit choices during the street parties. The most popular are policeman, sailor, pirate, Indian and mermaid. The ‘less is more’ rule still applies – a policeman or policewoman could be black shorts, black bikini top, police hat and handcuffs. Simplicity is the key, yet there will always be some that go that extra mile, such as a team of people dressing up as a rollercoaster or as bathtubs. There are fancy dress items sold everywhere on the streets before carnival, especially in Copacabana, Ipanema and Leblon, so buy items when you’re in Rio to save suitcase space. 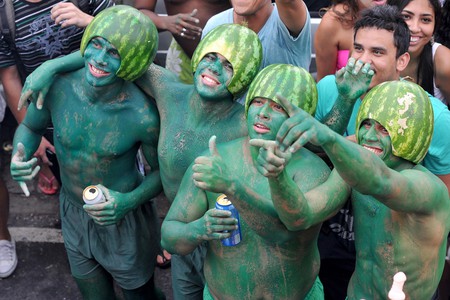 Dancing is the essence of carnival, and even if you can’t dance samba, you will be walking a lot behind the blocos. Wear trainers to protect your feet from broken glass on the ground or people treading on your toes. Leave the heels at home too; street parties are characterised by sexy-casual-chic and almost everyone wears trainers or flip-flops.