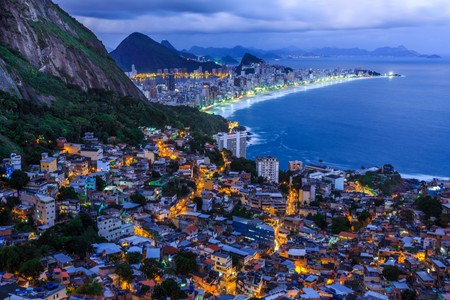 Vidigal favela and the Copacabana illuminated at night | © Hethers/Shutterstock

For Rio de Janeiro first-timers, staying in a favela may seem counter-intuitive – yet Vidigal just so happens to be the city’s most upcoming area since its 2011 pacification, with bustling bars and top-notch restaurants. From a growing street art scene to memorable nightlife, here’s a glimpse into impossibly cool Vidigal.

Vidigal clings to the Dois Irmãos (‘Two Brothers’) hillside, the two egg-shaped hills that can be seen at the far end of Leblon. Located between two of Rio’s wealthiest neighbourhoods – São Conrado and Leblon – Vidigal was once one of the most dangerous favelas in Rio, notorious for its high levels of violence and presence of powerful drug lords.

However, Brazil’s police force were ordered to crack-down on criminality in Rio, and Vidigal was one of the first favelas to be successfully pacified. Unlike shaky attempts of pacification in other local favelas, Vidigal flourished under its new pacified status and it gradually became an attraction for tourists looking to understand what a Brazilian favela was like.

Nowadays, it can be considered more of a community with typical favela architecture than a stereotypical ‘shanty town’ and is enjoying its growing hipster culture. 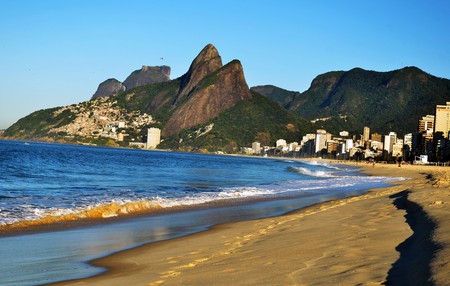 Staying in Vidigal can provide a more local experience of Rio de Janeiro. Favela Experience is one of the most popular hostels in Vidigal and is known for its scenic sea views. The simple accommodation provides a comfortable and safe place to stay with friendly, knowledgeable staff and free WiFi. Vidigal Guest House offers another cheap and cheerful accommodation option in Vidigal with multilingual staff and great oceanic views. Hostelzinho (which translates to ‘little hostel’) is another popular hostel in Vidigal for its cleanliness, friendly staff and stunning views of Ipanema beach. 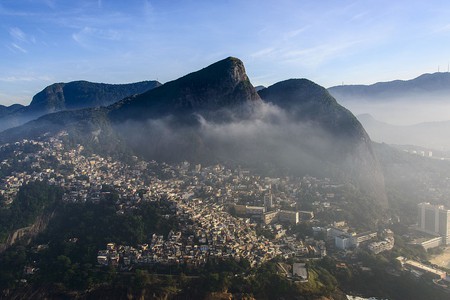 Vidigal is becoming the hottest spot in Rio for travellers looking for an alternative experience in the city. Once considered off-the-beaten-track, Vidigal is nowadays a well-trodden path among backpackers and bars have sprung up to accommodate them. Regardless of this fact, it is still an altogether different vibe than any other region in the city and the nightlife there has its own unique edge.

For food, head to Bar Lacubaco, a small, colourful restaurant that serves some of the best Brazilian food in the area – expect hearty portions of rice, beans and tender meat. For cocktails with an unforgettable view, try Bar da Laje. Its hilltop location provides broad views over the coastline and the city which can be admired from the comfort of a spacious terrace while sipping on a smooth cocktail.

For the after-party, go to Alto Vidigal which has popular all-night parties with reggae or funk being the favourite music choices, yet sometimes international DJs come and play electronic music. The sunsets from Vidigal are spectacular yet don’t miss the sunrise from Alto Vidigal. 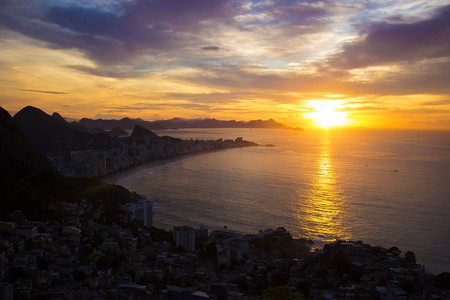 The sunrise from the top of Vidigal | © 3lysiumm/WikiCommons

Don’t be scared to get to know Vidigal better – the friendly locals and safe environment should be enough to make you feel welcome.

One of the most common reasons for visiting Vidigal is to do the Dois Irmãos hike. The base of the hike is at the top of the Vidigal community so you will need to get a van or motor-taxi to the top to reach the entrance. From there, the hike is about 40 minutes to the top with several viewpoints to stop, rest and appreciate the views. From the top, enjoy the sweeping vista over Ipanema, São Conrado beach and Rocinha favela. It is one of the best views in Rio.

Another great thing to do in Vidigal is to visit Vidigal beach. Mostly enjoyed by locals, the small beach remains hidden off the main road and you need to go down the winding stairway by the Sheraton Hotel to get there.

For culture-vultures, Vidigal’s street art scene is amazing. Whole walls are free canvases for talented Rio artists who use Vidigal as a creative outlet. Keep an eye out for Marcelo Ment’s artwork that features a beautiful woman’s face with colourful hair.