A Cultural Guide to Búzios: The Brazilian Saint Tropez 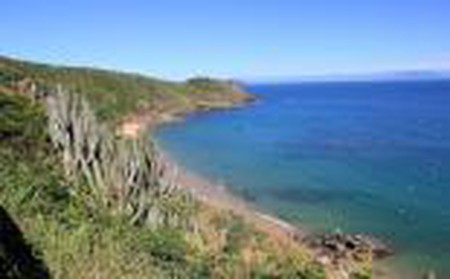 A small fishing village mostly unknown until the 1960s, Búzios became a glamorous tourist destination following a protracted visit by Brigitte Bardot. With much effort directed to the preservation of its natural beauty, the town’s European charm remains intact. Búzios is the perfectly balanced encounter between a picturesque fishing town and an elegant seaside resort, a quality that gained it a reputation as the Saint Tropez of Brazil. 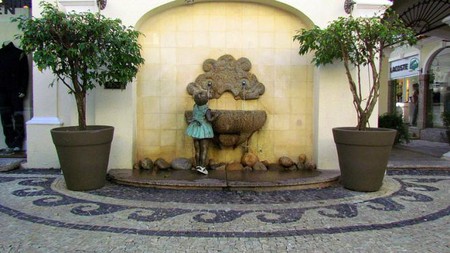 The Town and its History

Its full name is Armação dos Búzios, but this beautiful settlement on the Brazilian coast is commonly referred to as simply Búzios. Located in the state of Rio de Janeiro, 170 kilometres away from the city of Rio, this resort town is a celebrated destination, popular for both national and international tourism.

Centuries ago, the peninsula of Búzios was an anchorage area for pirates and slave traders. José Gonçalves beach, whose concealed position provided the perfect location for illegal business, was named after one of many rich traders who used to sail their ships to the Brazilian shores.Sprinkled with over 20 beautiful beaches and lapped by crystalline waters, early in the 1900s the peninsula became a fashionable site with the high society of Rio de Janeiro, who would flee the hustle of the city to find peace in what was at the time a rather simple and rural fishing village. It was only in the 1960s, following the visit of French actress Brigitte Bardot, that the town encountered a new and thriving phase of popularity and was finally consecrated as the Saint Tropez of Brazil. The European feel infused by the Portuguese colonization and its architectures, the narrow cobblestone streets, the long boulevard running along the coast, the rich vegetation and rugged coastline animate Búzios with the flair of a Provençal town. 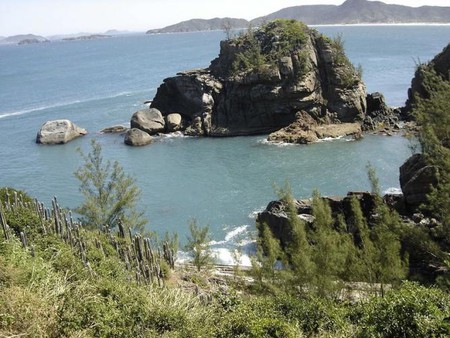 The Beaches in Búzios: A Local Heritage

As is true for many other renowned seaside locations along the Brazilian coastline, the attractiveness of Búzios stems from its charming beaches. These are treasured as part of the local heritage, most of them declared environmentally protected zone with the intent of preserving them from restaurants or kiosks being built spoiling the natural richness of the sites. Leisure opportunities are also oriented towards activities that best suit the geological conformation of each beach. 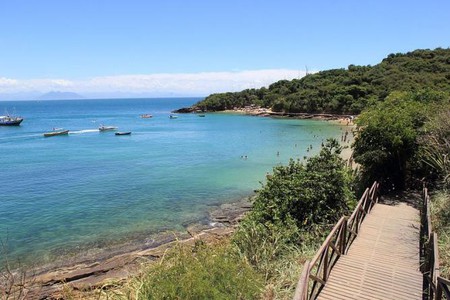 While the west coast of the peninsula enjoys calm and clear waters, the east coast opens to more rushing waves, offering a captivating wilder scenario for lovers of water sports. On the west side, with white sands framed in rocks and luxuriant vegetation, Azeda and the neighbouring Azedinha are among the favourite beaches of both townsfolk and tourists. The infrastructures at João Fernandes also make it one of the most popular beaches, located as it is close to the city centre and lined with luxury hotels and restaurants. The calm waters of this beach make it ideal for scuba diving and swimming, with many swimmers often venturing to the neighbour beach of João Fernandinho. The long stretch of sand at Manguinhos beach is instead renowned as a good windsurfing spot. On the east side of the peninsula, Geribá beach appears to be more youth oriented, its waves attracting sporty types willing to try surfing, bodyboarding, windsurfing, stand up paddling, or even the more stable futevôlei (a mixture of football and volleyball). Enjoying more placid waters Ferradura beach is where sailing boats, kayaks, banana boats and speedboats are available for hire. 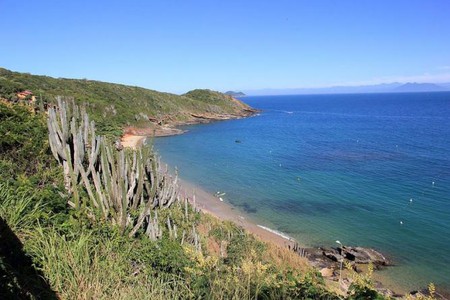 In the 1960s, Brigitte Bardot had a crucial role in the popularisation of the town of Búzios and in its subsequent metamorphosis into the alluring mix of fishing village and seaside resort town it is today. The legendary movie star first landed here in 1964 to escape the hordes of paparazzi following her and her boyfriend, the Brazilian musician Bob Zagury. The couple found a quieter haven in what was at the time a rural fishing village with no electricity. The actress reportedly fell in love with the natural beauty of the peninsula and the simplicity of life in the village. Having originally planned to stay for a short vacation, Bardot remained in Búzios much longer than she had planned, contributing to the rise of the town as a renowned tourist destination in the following years. Having grown fond of their celebrity patron, Búzios’ inhabitants dedicated a road to the actress, naming it Orla Bardot. Bardot was also honoured with a bronze statue sitting along the oceanfront path, a work by artist Christina Motta. The town’s cinema, the Gran Cine Bardot, also carries the name of the actress, and hosts a yearly film festival, the Búzios Cine Festival, which will celebrate its 20th year in 2014. 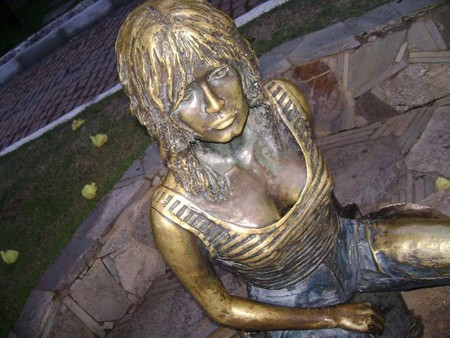 Dining, Sleeping and Going Out

Featuring a yearly gastronomic festival, Búzios enjoys a diverse and international dining scene, but local food is of remarkable quality and a must-try. Seafood based plates of the Brazilian tradition populate the tables of the local restaurants serving dishes like grilled fish, caldeirada and moqueca. The latter is a seafood stew that can be based on all sorts of fish, from clams to lobster, to prawns and more unusual species like sting ray, prepared using dendê oil and coconut milk. Most places also serve classic meat dishes like picanha na pedra, which consists of steak barbecued on stone. 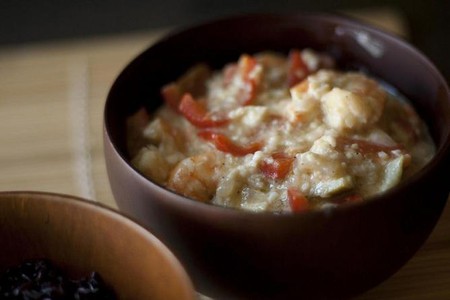 A feast for foodies’ taste buds, some of the restaurants that stand out in this delightful scenario include the seaside gem of Rockafish Beach Lounge & Restaurant for fresh fish dishes to enjoy on the beach, Sollar for Italian cuisine and original mozzarella dishes, Farinatta Bistro & Arte, which combines international dishes and fish specialties with a small art gallery hosted in the restaurant space, and Bar do Zé, appreciated for its delicious international cuisine combined with plates of the Brazilian culinary tradition. 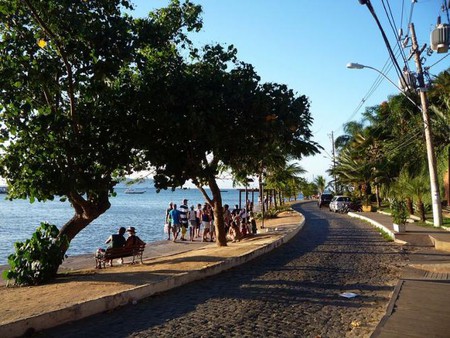 Búzios peninsula also boasts a vibrant nightlife unfolding throughout the streets of the city centre, with Rua das Pedras and Orla Bardot pulsating at the heart of the exuberant after dark bustle. Crowded with shops, bars, and clubs, the surroundings offer an ample choice of dazzling dance clubs, alluring lounge spaces, and sophisticated jazz atmospheres. Also a nightlife hot spot, Fishbone Café is a popular party place located on Geribá beach. 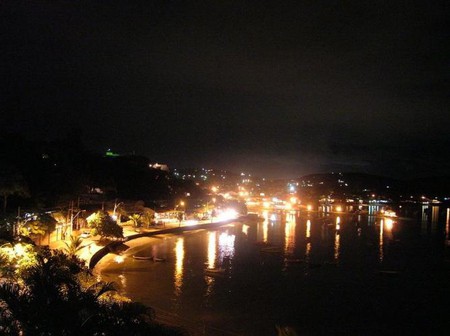 Visitors in Búzios will be spoiled with choice when it comes to charming, relaxing, and comfortable hotels where to rest and delight in the charm of the Brazilian Saint Tropez. Two among the best picks for hotels are Vila d’Este Handmade Hospitality Hotel, offering rooms individually decorated with Mediterranean themes and sublime ocean views, and Casas Brancas Boutique Hotel & Spa with the airy spaces and pastel tones of its rooms opening on the spectacle of the tranquil waters of Ossos beach.