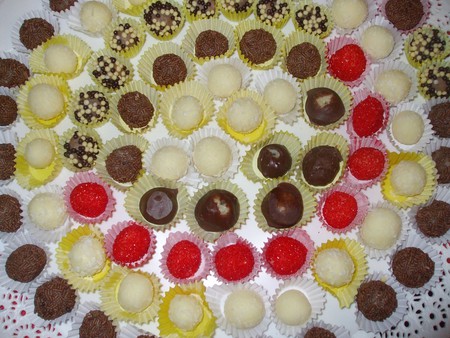 Just as skewers of cheese and pineapple are present at many birthday parties in the UK, olha de sogra – ‘mother-in-law’s eye’ – is traditionally served at birthday celebrations in Brazil. Despite the unusual name, this food is actually a small delicious sweet. And even though the origin of the name remains unknown, there are theories surrounding the mystery. Here, Culture Trip unravels the history of one of Brazil’s most famous sweets.

Olha de sogra is a beijinho – another Brazilian sweet – placed on top of, next to, or under a dried plum and covered in crystal sugar. To get an idea of what this looks like, you need to know what a beijinho is. A beijinho – which translates into ‘little kiss’ in English – is a typical Brazilian sweet made with condensed milk, coconut flakes, and butter before being coated in granulated sugar and served as little balls with a clove on the top. Brigadeiro is one of Brazil’s most famous sweets and is the chocolate version of the beijinho. All three of them are commonplace at birthday parties that take place at homes or rented-out venues, for both adults and children. It is also common to find these three sweets at weddings as part of the buffet.

The name of olha de sogra remains unclear, yet the fact that the sweet is in the shape of an eye goes some way of explaining part of the name. The sweet is of Portuguese origin and has been adapted into Brazilian gastronomic culture. During the time when it was exclusively Portuguese, it was known as the olha de cobra – ‘snake’s eye’ – which lied in the fact that it was oval-shaped, like a snake’s eye.

Why it changed to mother-in-law’s eye when it came to Brazil has a couple of theories. The first is simply that a mother-in-law supposedly sees and knows everything and has olho grande – ‘big eyes’ – which is an expression in Brazil that means someone who notices everything. There is a story of a mother-in-law who watches over the girl that her son wishes to marry so closely that the couple is never left alone. Due to this stereotype of a mother-in-law, the name of the sweet changed from olha de cobra to olha de sogra as a joke, which later stuck.

Another story tells of a recently married girl who would visit her mother-in-law regularly to learn how to cook for her husband the way he was used to when he was growing up. The daughter accidentally put plums in with the rest of the ingredients, and instead of throwing away the batch, she added plums on top to decorate them in an attempt to show she could cook and be creative by making new sweets. The risk paid off, and her husband and guests loved them. When asked how she came up with the idea, the girl replied, ‘this sweet was made under the eye of my mother-in-law.’

The truth is that no-one is fully sure how the name came to be, but it is commonly accepted as a joke about a mother-in-law’s watchful eye. Whatever the origin, the sweets are common across Brazil and are easy to make. Some variations include adding a few drops of vanilla syrup or adding a layer of caramel or chocolate.