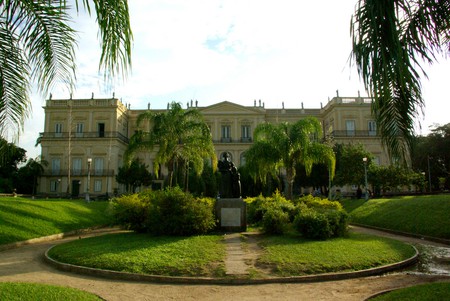 Paço de São Cristóvão (Saint Christopher’s Palace) is the home of the National Museum of Brazil, holding some of the largest collections in the Americas. This extraordinary building used to be the home of the royal family and, if walls could talk, they would tell stories of births, deaths and constant transformation. Here, we unravel the history of this stunning mansion.

Paço de São Cristóvão is on the top of the hill in Rio de Janeiro’s Quinta da Boa Vista, a public park that has great historical significance and modern day importance. This park is home to the National Museum of Brazil and the Zoological Garden that holds over 2,000 animals.

Its story starts in the 19th century when Quinta da Boa Vista belonged to a wealthy Portuguese merchant, Elias António Lopes. He decided to build a manor house on the top of the hill in 1803, constructing an elegant home in the beautiful gardens. When the Portuguese court was transferred to Brazil in 1808, Elias generously donated his manor to the Prince Regent John VI who moved in and lived there with his royal family.

In 1819, the first of the renovations started as the Prince decided to make the home more appropriate for the residents, turning the mansion into a royal palace. However, it wasn’t long before Brazil gained its independence and the royal palace switched hands to accommodate its new owner, Emperor Pedro I. Over the next few years he would make several transformations, making the inside look luxurious, regal and impressive. These renovations gave the mansion its neoclassical style with Italian influence from Mario Bragaldi, who painted the decorations.

The palace saw the birth of Maria II, the future queen of Portugal, and the birth of the future Emperor of Brazil, Pedro II who was brought up and educated within the mansion walls. The Empress Maria Leopoldina, wife to Pedro I, later died in the palace in 1826.

When Pedro II became the emperor of Brazil, he ordered for the gardens to be remodeled. This responsibility was left in the hands of French garden designer Auguste François Marie Glaziou who created artificial lakes, bridges, caves and false ancient temples, all in keeping with the Romantic style at the time. He transformed the gardens into a stunning and peaceful area.

In 1889, after decades of residence, the Proclamation of Republic drove the imperial family out of the country and the once lively and familiar palace was left empty. In 1892, it was repurposed to become the National Museum of Brazil that saw the interior of the palace taken apart and dispersed to other areas, and to this day parts can still be found in other museums. The throne room, for example, was reassembled at the Imperial Museum in Petropolis and still retains its former glory.

A 2018 fire destroyed Paço de São Cristóvão and half of the museum’s exhibits of the Americas, including animals, insects, minerals, aboriginal collections of utensils, ancient Egyptian mummies, South American artefacts, meteorites and fossils. Plans are in the works for a partial re-opening in 2022 for the 200th anniversary of Brazil’s independence. It is a truly extraordinary museum inside a mansion that is draped in history.