The Takeaways From The Rio Olympics Opening Ceremony 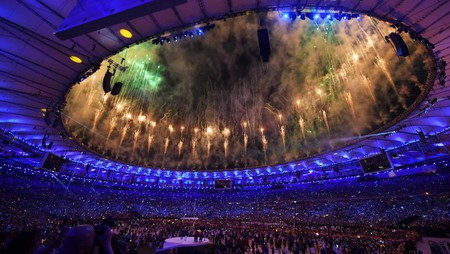 The 2016 Summer Olympics in Rio de Janeiro officially kicked off Friday with the Opening Ceremony at the famed Maracanã Stadium.

Known for its lively and eclectic culture full of music, dance and color, Brazil had the eyes of the world fixated upon it for the beginning of 17 days of competition.

Here are 5 takeaways from the Opening Ceremony:

Fernando Meirelles, one of three directors of the ceremonies in Brazil this summer, said the budget was $55.9 million for the Opening and Closing Ceremonies of the Olympics and Paralympics in Rio.

Meirelles, Daniela Thomas and Andrucha Waddington spent some of the funding on a projection field. Viewers were transported through the years as Brazil became the country it is today — from the creation of the rain forest to Portuguese exploration, to the building of favelas and the development of cities.

‘It’s not about props and technology,’ Thomas said during the broadcast, ‘but about heart and soul.’

Gisele Bündchen, perhaps Brazil’s greatest export, came out of retirement for one last trip down the cat walk.

The supermodel strutted her stuff as ‘The Girl From Ipanema‘ was played by Daniel Jobim, grandson of Tom Jobim, to help her country kick off this summer’s festivities.

Bundchen wasn’t done, though. She was in the crowd later during the Opening Ceremony dancing and singing along with fans as fluorescent colors dominated the pupils and the lively music got everyone off their feet.

The Opening Ceremony was more than just one big party. There was also a very important message to be shared regarding global warming and climate change. Imagery about CO2 levels, increases in the world’s temperature and the melting of ice caps where displayed. Each of the 11,000 athletes were given a seed to plant in the Athlete’s Forest, a living legacy of the 2016 Games and an effort to help combat climate change.

Pelé, arguably the greatest soccer player of all-time, unfortunately, had to pull out of the Opening Ceremony and relinquish the honor of lighting the Olympic Cauldron to signal the start of the Games due to health concerns.

Gustavo Kuerten carried the torch into the stadium, then handed it to Hortencia Marcari. She brought it to the stage, then De Lima brought it up the stairs and held it aloft as those in attendance cheered.

The cauldron was lit and the games were official underway.

I am there with you tonight with energy and thought at Maracanã Stadium. God bless you all! #olympics #openingceremony — Pelé (@Pele) August 6, 2016

Pita Nikolas Taufatofua will become a household name if he hasn’t already.

The Tonga flag bearer proudly led his teammates in the parade of nations … shirtless!

Taufatofua, who qualified for the Olympics in Takwondo, wore a ta’ovala (a Tongan mat) wrapped around his waist with his oily bare chest exposed.

‘He is very patriotic and loves Tongan culture,’ Taufatofua’s friend Jacinta Sitapa told USA Today. ‘He didn’t know if he was going to be picked to carry the flag, but if he did he strongly felt that it should be something that represented the country.’