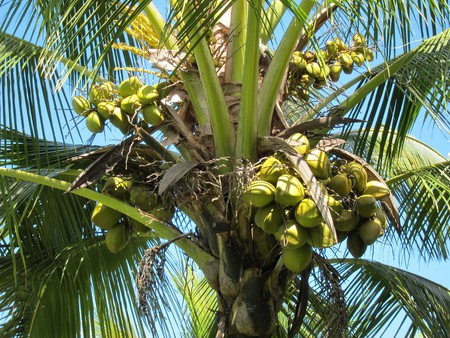 Brazil’s vast size and ideal location on the world map exposes it to an extraordinarily diverse range of climates and terrains which in turn fosters perfect conditions for exotic food to grow. Often, everyday foods that are taken for granted actually started life in Brazil before crossing a vast ocean to get to our plates. Culture Trip rounds up 15 surprising ingredients that come from Brazil.

The star of the moment, super-food açaí is a deep purple berry that grows wild and free in the heart of the Amazon rainforest. Nutritionists and health gurus across the world proclaim this berry as one of the healthiest due to its apparent antioxidant-rich properties, yet it has been a staple part of the Brazilian diet for many years. In the north of Brazil, it is often eaten in its raw form which is quite bitter. In Rio de Janeiro though it is mixed with ice and strawberries, and served as a kind of sorbet which is how it is more commonly eaten throughout the world. 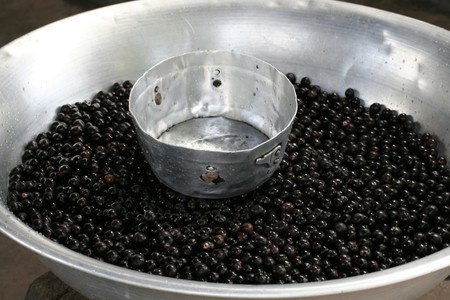 This bean is most commonly seen around the world in chillis, wraps and bean salads. In Brazil, it is one of the most commonly used ingredients and an integral part of lunch and dinner. It’s soaked for hours before being boiled down with added salt and herbs before being served alongside rice and meat. It is popular on the health scene for being a rich source of protein and fiber as well as a natural way to top up on zinc.

Black-eyed beans are also known as black-eyed peas yet it’s almost impossible to not think of the famous pop band with the latter name. In Brazil, black-eyed beans are the key ingredient in the fried bean patties, Acarajé. Elsewhere, they are a main part of bean salads, vegetarian soups and can be used as an interesting and tasty alternative to chick peas when making hummus. They are also linked to considerable health benefits, including being a rich source of fiber. 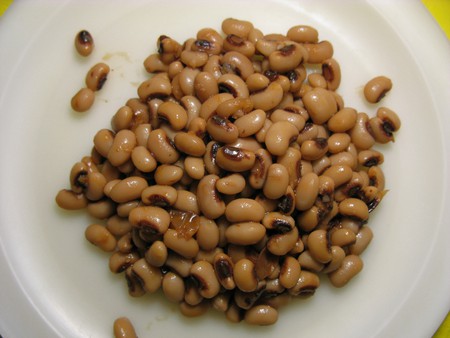 The humble banana is originally a native fruit from Asia but it adapted well to Brazil’s climate and soils when it was first introduced around the 16th century. Nowadays, Brazil is one of the largest producers of bananas alongside India and by far the largest consumer of bananas in the world. Plantain (banana da terra in Portuguese) grows natively in Brazil and can be cut up and fried as a tasty and healthier alternative to chips. 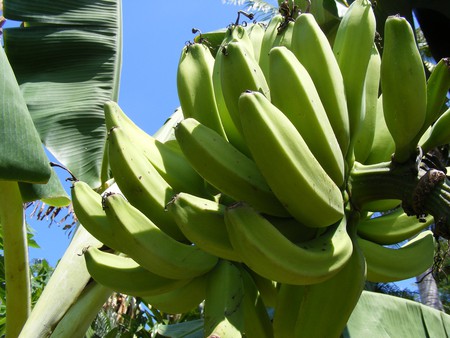 Whilst the EU produces a significant proportion of the world’s beef total, Brazil alone supplies more than the all the countries in the EU put together, second only to the US. Beef from Brazil is often considered to be very high quality due to its taste and texture. The famous Brazilian churrascos (barbecues) can be held in someone’s back garden or more formally at large churrascaria restaurants that serve all you can eat on a range of meat cuts. The most celebrated cut in Brazil is the picanha which is tender, juicy and full of flavor.

Cashews include the fruit and the nut. The cashew fruit looks like a cross between a pear and an apple and is used in Brazil in juices, desserts, cocktails and preserves. The taste is unique and likeabilty tends to be polarized with people either loving it or hating it. The cashew nut is a common ingredient all around the world, loved for its creamy, light taste. Each cashew fruit grows one cashew nut, requiring an extraordinary amount of fruits to be harvested to make one bag of cashew nuts. 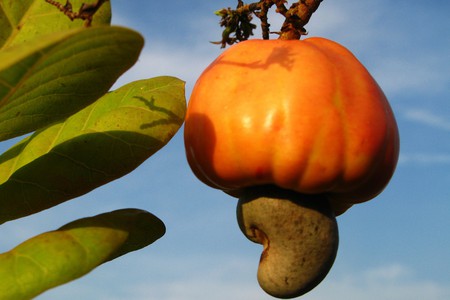 Cachaça is the representative for Brazil in the distilled spirit category and is made from sugar cane, a crop that is vital for Brazil’s agribusiness economy. Like any spirit, there are some cheap, throat-burning brands at one end of the spectrum to smooth, sip-worthy shots at the other. It is most common in Brazil’s national drink, caipirinha, and can be added to other cocktails too.

Cassava is certainly enjoying an elevated status in the world of gluten-free as its flour can be used as an alternative for those who are sensitive to or wish to avoid gluten. Its starch is known worldwide as tapioca which originally came from the northeast of Brazil before spreading down the coast and making itself a part of the everyday diet. It is cooked as a pancake and can be topped with either sweet or savory items. 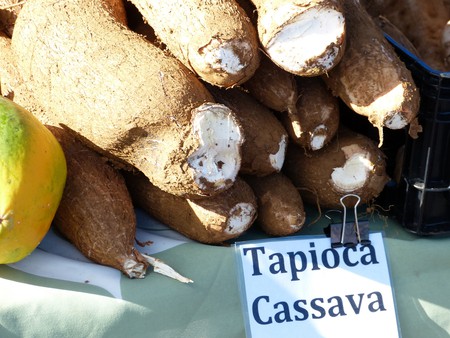 This delicious cheese with its creamy texture can be found absolutely everywhere in Brazil; spread on toast, mixed with chicken and added to a pizza, inside cheese breads, stirred in with prawns and stuffed into pies, rolled up with meat – it truly is a versatile cheese with a mild taste similar to brie that seems to work with almost anything. This cheese spread can be found outside of Brazil and is definitely worth looking for.

The coconut is actually a native of Asia but like the banana, it adpated well to Brazil’s climate and soil conditions allowing it to thrive and turn Brazil into the fourth largest producer of coconuts in the world. Whilst in large internal cities coconuts have more use in oil for beauty and food or added to cakes, within the coastal cities it is normal to get a chilled, green coconut and drink the milk straight from the nut.

Brazilian coffee is famous around the globe not just for its taste but for its high availability. This is hardly surprising given that Brazil is the largest coffee exporting country in the world, a position it has held for the last 150 years. Coffee in Brazil is mostly found in the southeastern states such as Minas Gerais, São Paulo and Paraná where climate conditions are ideal. From small local shops to large chains such as Starbucks, many places use and supply Brazilian coffee beans. It is likely that your daily coffee is sourced from Brazil. 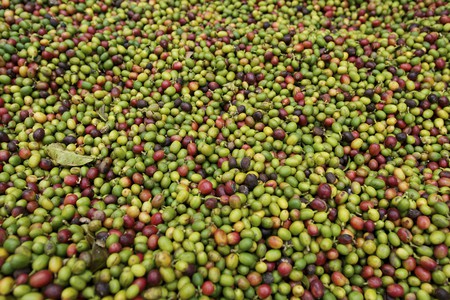 Limes thrive in Brazil, making the country the largest supplier of limes by far both in national trade and exports, with Mexico and India close behind. Although in the West limes are generally associated with mojitos or Asian style cooking, especially southeast Asia, in Brazil it is a common accompaniment for fish, feijoada and other main meals. It is also the essential ingredient for the classic national drink, caipirinha.

Passion fruit is a fruit native to the southern regions of Brazil that is simultaneously sweet and sour. In Brazil it is known as maracuja and is often the base of creamy mousses, added to cake toppings or an alternative to limes in caipirinhas. It’s a great ingredient to use instead of limes in cooking too and can be added to salsas, salads, desserts and Asian-styled food for a slightly different yet delicious taste. 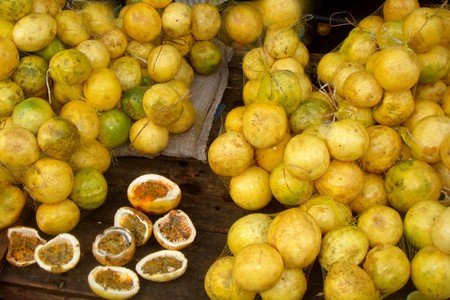 One of the best aspects of Brazil’s gastronomic scene is that the country is rich in exotic fruits that can be bought fresh or picked straight off the branch. The pineapple is one of those fruits and contrary to what many people think, it actually grows from the ground surrounded by long, sword-like leaves, and not hanging from trees. Brazil is the second largest pineapple producer in the world after Costa Rica, and contributes to 10% of all the world’s pineapples. 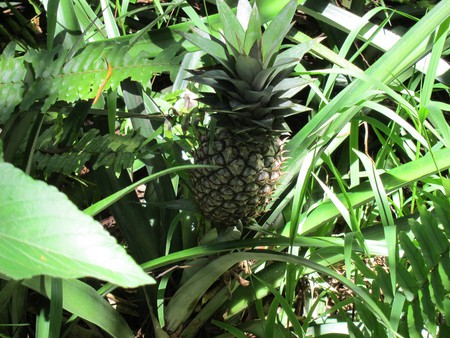 Soybeans are the reason for things such as soy milk, tofu and soy sauce, and are often used as a meat and dairy substitute. They are also hailed as the one of the most effective forms of agriculture, producing more protein per acre than most other uses of land. Brazil is one of the largest producers and exporters of soybeans in the world, second only to the United States of America.