The 15 Most Beauty-Obsessed Countries in the World

Ever wondered which countries in the world are the most vain? As globalisation slowly begins to spread across the world, more and more people are opting to go under the knife to attain their version of perfection. So where in the world does cosmetic surgery have the most sway – and what procedures are top of the list?

Thanks to Instagram influencers, millennials and others besides, an obsession with beauty and surgical procedures is on the rise, as exposure to the idealised version of perfection increases. Based on a report by the International Society of Aesthetic Plastic Procedure (ISAPs), we’ve put together a map which offers a glimpse into the countries where cosmetic surgery is the most popular around the world. Making the top list are the US, Brazil, Japan, Italy and Mexico – and while some may be obvious, there are others that will surprise you. 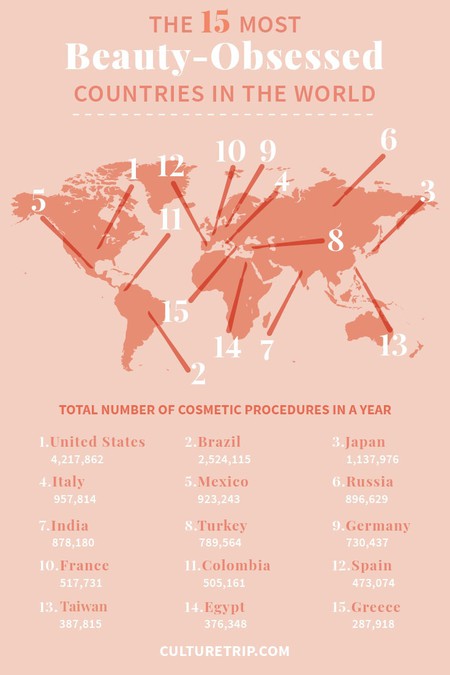 The top five countries on the map (USA, Brazil, Japan, Italy and Mexico) account for a whopping 41.4% of the world’s total expenditure on surgical procedures, followed by Russia, India, Turkey, Germany and France. Here’s an overview of what these countries are spending their money on.

Plastic surgeries that have seen the highest amount of growth

Surprisingly, labiaplasty (the altering of the outer folds of the vulva) was the surgery showing the greatest increase from the previous year in number of procedures in 2016. This was closely followed by the lower body lift which increased by 29%, with the upper body lift and breast alterations coming next, and finally, the buttock lift having increased by 20%.

The most popular cosmetic surgical procedures

Remaining firmly at the top of people’s wish lists is breast augmentation, accounting for 15.8% of all surgical procedures. Despite popular beliefs, penile enlargement has remained the least popular procedure as people decide to remain natural, while Botox still remains consistently the world’s most popular non-surgical procedure.

So what distinguishes the procedures on the wish lists of men compared to those of women? Cosmetic surgery is statistically much more popular with women than in men, with 86.2% of plastic surgeries being conducted being on women. Among the most highly sought-after procedures are breast implants (with silicone inserts), eyelid surgery and then abdominoplasty.

In contrast, men only accounted for 13.8% of surgical procedures, with the most popular surgeries requested being eyelid surgery, gynecomastia (breast tissue reduction), rhinoplasty, liposuction and finally, hair transplant procedures.

The results of the report clearly show that the demand for plastic surgeries is higher than it ever has been, and shows no signs of slowing down – Brazilian bums included.