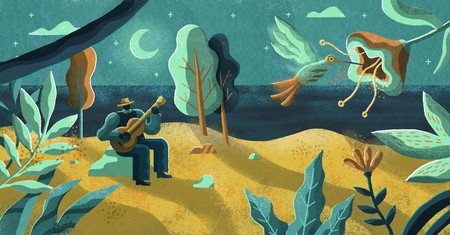 Brazil is the only Portuguese-speaking country in South America, setting it apart from the predominately Spanish speaking continent, and up until the first Portuguese settlers came in 1500, bringing with them their culture and language, it had approximately 1,000 indigenous idioms. Nowadays, Brazilian Portuguese has developed slight differences from its colonial roots, notably in grammar, vocabulary and intonation; Brazil’s distinct melodic tone, which is peppered with harmonic dips and peaks, is, arguable, the most sweet-sounding of all the Portuguese dialects.

Portuguese is a Latin language and so, many of its words originate from this ancient vocabulary. Vida is one of them and comes from the Latin word vīta, which literally means ‘life’. It’s similar, if not identical, to the words for ‘life’ in other romance languages, such as Spanish (vida), Italian (vita) and French (vie).

The term beija-flor links together two nouns—beija, which means ‘kisses’, and flor, which means ‘flower’—to create a word that describes the delicate way a hummingbird feeds on nectar. Beija-flor is also the name of one of Rio de Janeiro’s largest samba schools, which was crowned the champion of Carnival 2018.

The word lua, or ‘moon’, comes from an important part of Roman mythology. After grouping the moon with the sun and five other planets as the seven major points in the sky, the Romans adopted the seven-day week for their calendar and the days of the week were named after these seven astronomical bodies. This nomenclature still exists in many romance languages today, except in Portuguese, which uses the Catholic calendar. Some everyday expressions use lua, such as lua de mel, which directly translates to ‘moon of honey’, or ‘honeymoon’.

The Portuguese word for ‘happiness’ comes from the Latin word fēlīcitās, which derives from two words: fēlīx, meaning ‘happy’ or ‘fortunate’, and the suffix -tās, which refers to a state of being, such as ‘-hood’, ‘-ness’ or ‘-ship’. Brazilians often wish each other muitas felicidades (‘much happiness’) when celebrating a birthday, a wedding or some other festive event.

The word for ‘poetry’ in Portuguese is poesia and comes from the Latin word poesis which, in turn, comes from the Ancient Greek word poíēsis, literally meaning ‘composition’ or ‘production’. Some of Brazil’s most famous writers include Machado de Assis and Carlos Drummond de Andrade, the latter of whom was regarded as the greatest Brazilian poet to have lived.

The word liberdade derives from the Latin word lībērtās, which can be broken down into līber (meaning ‘free’) and the suffix -tās. It’s also the name of a well-known neighbourhood in São Paulo which has a large Japanese community and dozens of traditional Japanese restaurants and stores.

The Portuguese word for ‘passion’ originates from two roots, both of which are based in religion: the Latin word passiō, which means ‘sufferings of Christ on the cross’, and passion, which comes from Old French and means ‘Christ’s passion and physical suffering’. Nowadays, it refers to an intense love or enthusiasm that can be likened to a physical pain, especially if the paixão is not reciprocated towards someone.

The Portuguese word for ‘soul’ has roots in the Latin word anima, which means ‘soul’ or ‘breath’, as well as ‘spirit’. This root word has cognates in other languages, such as the Ancient Greek word ánemos (meaning ‘wind’ or ‘breeze’), the Old Frisian term omma (meaning ‘breath’) and the Sanskrit word ánila (meaning ‘air’ or ‘wind’).

There are multiple possible origins for the Portuguese word for ‘beauty’. The word beleza itself probably comes from the Vulgar Latin word bellitia, which derives from the Latin word bellus, an ancient word for ‘beauty’, ‘handsome’ or ‘pretty’. It’s believed that while beleza has these origins, it may also have been adopted by the Portuguese language from the Italian word bellezza or the Old Occitan word belleza, rather than directly from Latin. In addition to meaning ‘beauty’, it’s also common in Portuguese to use beleza to mean ‘okay’ or ‘that’s fine’.

The Portuguese word for ‘affection’ is carinho and is often used between people who share a close relationship; if you gently stroke, massage or soothe someone, it’s said you are dando carinho or ‘giving affection’. It comes from the Spanish word cariño, which may have derived from the same word in Aragonese that means ‘beloved’.

The word nuvem has obvious roots going back to the Proto-Indo-European word newdʰ, which means ‘to cover’ and describes clouds by an action they exert. The word later evolved into nūbes in Latin and then to nuve in Old Portuguese. Today, ‘cloud’ is nuvem and ‘clouds’ is nuvens.