14 Things You Can Only Do in Rio De Janeiro 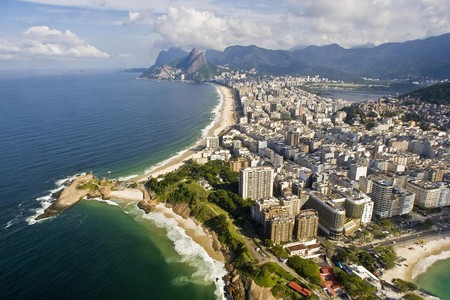 A city that seamlessly blends urban life with epic natural landscapes sets the perfect scene for a bounty of things to do, many unique from such remarkable conditions that are hard to find anywhere else in the world. Here are some of our favorite things to do in Rio de Janeiro that you probably can’t do anywhere else.

See the largest Art Deco statue in the world

The famous Christ the Redeemer stands at a remarkable 38 metres (125 feet) tall on the summit of Corcovado mountain in the Tijuca forest. Built in 1931, it remains to this day the largest Art Deco statue in the world and was recently declared as one of the New Seven Wonders of the World. It can be reached by train, van or hiking up to the peak. 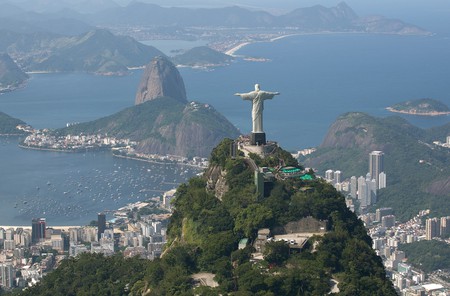 Technically this title is in dispute with the man-made urban forest in Johannesburg, yet it is widely accepted that Tijuca National Park is the largest urban forest in the world. Covering an area of 32 kilometres (12 miles) squared, it is also home to various animals and plants that are unique to this environment and cannot be found anywhere else in the world. There are various hikes and waterfalls to be discovered among the thick vegetation, as well as wonderful examples of historical architecture.

This rocky peak is one of Rio’s most famous landmarks – the Pão de Açúcar, or Sugarloaf mountain. To get there, visitors can first hike the smaller peak in front of the Sugarloaf then take the cable car the rest of the way, or just take the cable car right from the bottom all the way to the top. The view from the summit unfolds a complexity of sights, with city life, beaches, huge sweeping forests and a great expanse of ocean all in one panoramic snapshot. Be sure to go before it gets dark – to see these views at sunset is one of the most rewarding experiences in Rio. 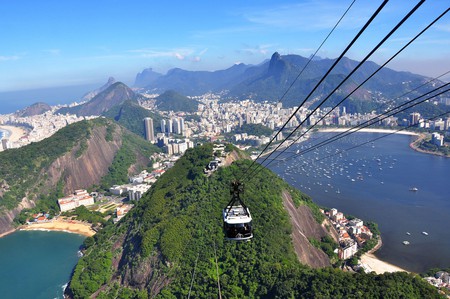 The view from the Sugarloaf Mountain | © Alexandre Macieira|Riotur/Flickr

Visit the bar that inspired the song Garota de Ipanema

In the 1960s, Brazilian music artists Tom Jobim and Vinicius de Moraes were sat at a bar when Helô Pinheiro walked past. Back then, she was a 17-year-old girl and her beauty inspired the hit song Garota de Ipanema (The Girl from Ipanema). The bar they were at now takes the name of the song and it’s just a couple of blocks from the beach. Garota de Ipanema restaurant is decorated with memoirs of its famous past and serves traditional Brazilian food.

Go to the birthplace of samba

Every Monday night in Rio’s city center, the streets come alive with the mesmerizing tunes of samba. Pedra do Sal is the original birthplace of samba, and each week samba bands go there to perform a roda de samba – a live, spontaneous jamming session. The event takes place outdoors, allowing visitors to make the most of Rio’s warm, humid nights while sipping caipirinhas and listening to the most authentic samba in the city.

Maracanã is the largest stadium in Brazil with a capacity of 78,838 people. It is second only to Estadio Monumental in Peru which is the largest of its kind in South America. It has hosted several milestone events such as the World Cup final in 2014 and the Olympics in 2016, in addition to well-known concerts and performances. Try to watch a Fla-Flu game (Flamengo vs Fluminense) which is one of the most passionate, emotional games to watch between local soccer teams. 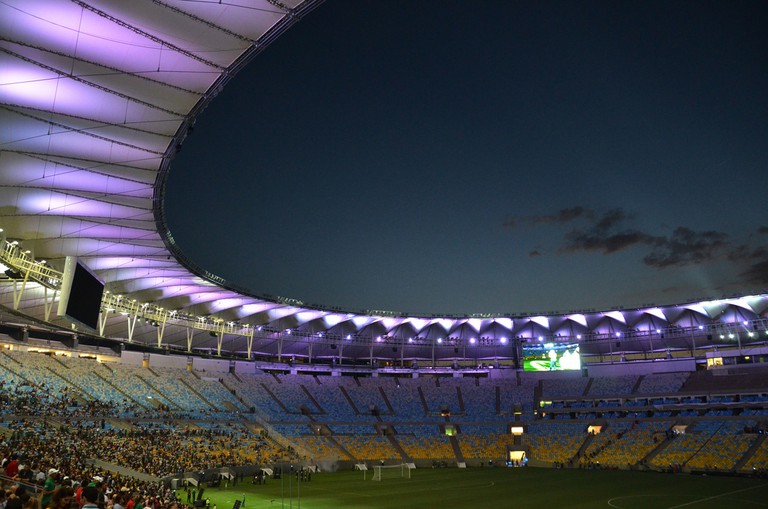 Seeing a sunset is something that can be witnessed anywhere, but only in Rio does the sun set next to a medley of extraordinary features such as the long row of hotels and apartments that hint at the urban culture, a glorious eight-kilometre beach, a huge thick forest and a favela that twinkles as the lights come on for the evening. To see this, head to Arpoador in Ipanema, one of the most incredible and easy to get to places in Rio to see an unforgettable sunset.

Rio may be one of the only places in Brazil where tourists can safely visit a favela. The tours tend to involve an introduction to the favelas, their history, the story behind their pacifications, the lives there and other points of interest. Many visitors are surprised to discover that favelas are tight-knit communities and practically self-sufficient with banks, restaurants, supermarkets, medical centers and schools. Try the Favela Phoenix tour that explores the largest favela in South America, Rocinha. Part of the proceeds goes to the English school within the favela that provides free English classes to the favela residents. 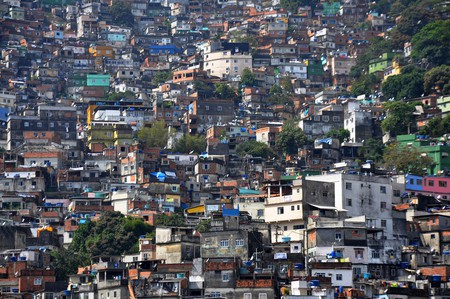 While winter sports are obviously off the curriculum because of the tropical climate, Rio de Janeiro is an incredibly active city and almost any sport can be found here. From surfing, kitesurfing and scuba diving, to running, cycling, soccer and volleyball, there is something for everyone. Other popular sports include jiu-jitsu, capoeira, yoga, dancing and rock climbing.

Rio de Janeiro consists of several hubs, and each one has its own unique personality and charm. Head to Leblon to mingle with the body-conscious, or drift to Ipanema for its laid-back beach vibe. Botafogo effortlessly caters to the hipster scene with new bars, restaurants and underground venues. Go to the city center for the rush of a busy working day that is set against stunning examples of architecture, or party until dawn in Lapa’s thriving nightlife scene. Take to the hillside to experience the bohemian flair of Santa Teresa, or take a boat to Ilha de Paquetá for the ultimate peace and tranquility. Rio’s personalities are endless and each visitor will leave with their own favorite neighborhood.

At 840 metres (2,750 feet), Pedra da Gávea is one of the largest peaks in Rio de Janeiro and sits right next to the coastline. The hike to the top is challenging and demands a moderate level of fitness to endure the two and a half hours to the summit. Yet the reward is breathtaking views over towards Barra da Tijuca and Recreio, and across the Ipanema and Tijuca forest.

Find an abandoned hotel in the middle of the forest

The Gavea Hotel was planned to be a stunning, 16-floor hotel surrounded by rainforest. However, bankruptcy ceased the construction works, leaving behind an almost complete yet abandoned hotel. Known locally as Esqueleto Hotel – the Skeleton Hotel – it became home to squatters seeking shelter, before turning into a local attraction to those brave enough to find it and climb to the top. 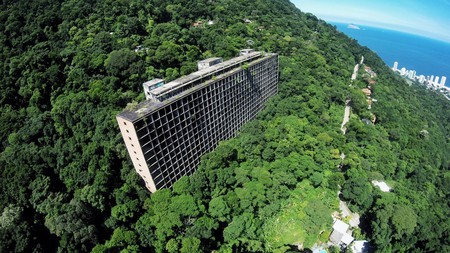 In Barra da Tijuca, one of Rio’s most affluent neighborhoods, lies Terra Encantada – Enchanted Land – that has been closed and abandoned since 2010 after a woman was flung off a ride and died. All the attractions remain in place, creating a haunting landscape. An investigation found several mechanical faults and technical failures on many of the rides and officials immediately shut the site down.

Vista Chinesa in Tijuca National Park is a Chinese-style gazebo built in the 19th century in honor of the Chinese community that came to Brazil to cultivate tea. The gazebo won an award in China as the best example of a Chinese gazebo outside of China. It has stunning views over Lagoa, Tijuca forest and Ipanema beach. 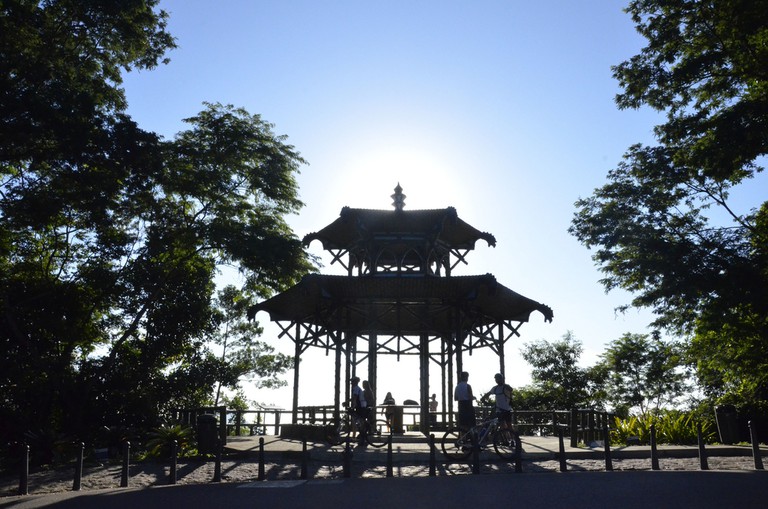