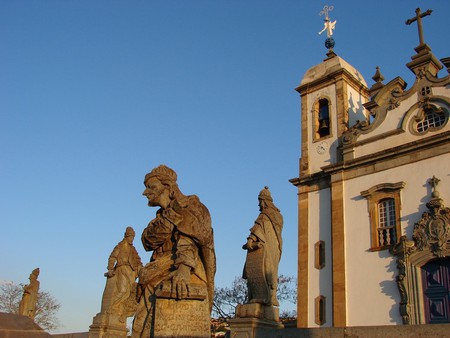 Aleijadinho is Brazil’s most celebrated Baroque artist and sculptor from the 18th and 19th centuries and is largely credited for the unique Baroque architecture of Ouro Preto in Minas Gerais. Despite his apparent success and prestige, his life was not an easy one (some historians argue about whether or not he even existed) and was shrouded in hardship, artistic brilliance, and mystery.

“Aleijadinho” was born on August 29th, 1738 (or 1730, depending on your source) as Antônio Francisco Lisboa. During his life, he became known as Brazil’s greatest sculptor and architect and was especially famous for his Baroque art.

His dad was Manoel Francisco da Costa Lisboa, a Portuguese architect, and his mother was an African slave whose name, according to some records, was Isabel (though other sources dispute this). Aleijadinho’s father became an architect in Brazil and because he was skilled in carpentry and architecture, those were the disciplines passed on and taught to Aleijadinho.

Where did his nickname come from?

“Aleijadinho,” meaning “little cripple” in Portuguese, was the nickname bestowed upon the famous Brazilian artist to refer to his handicap that came as a result of a debilitating disease, which is believed to have been either leprosy or scleroderma. The disease caused him to lose his fingers and created deformities in his feet, yet he didn’t give up on his art or work. It’s said that he became reclusive and only worked at night, opting to cover himself with a cloth if he had to go outside during the day.

Aleijadinho’s biggest achievement is considered to be the Twelve Prophets, a set of soapstone sculptures that he carved between 1800 and 1805. The sculptures are in Congonhas do Campo and they surround the Santuário do Bom Jesus de Matosinhos, a Rococo-style church. What makes this feat particularly remarkable is that it’s said Aleijadinho strapped a chisel and a hammer to his hands to complete it, as he no longer had fingers to hold his tools. He also worked with pads to support his knees as the deformities in his legs had caused the loss of his feet. 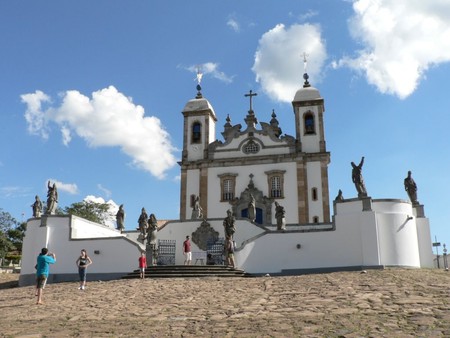 According to Dalton Sala, a Brazilian researcher who specializes in art history, Aleijadinho is a myth and was simply invented by the Getúlio Vargas presidency to help build a stronger national identity. Sala claims that there has never been any proof that Aleijadinho’s works were created by an artist known as Antônio Francisco Lisboa, or even Aleijadinho. He is one researcher among several historians who believe Aleijadinho never actually existed and that the existing sculptures and architecture were built by teams of different artists.

Many people do believe he existed

In response to Sala’s claim, Marcos Hill, a professor of art history at the Federal University of Minas Gerais, countered that Sala was manipulating the facts and the data about Aleijadinho’s life to come to his own conclusions. Hill also said that though there are few documents about Aleijadinho, his sculptures and the art he left behind are sufficient proof that he existed, as artworks can be treated as a form of evidence.

Besides the Twelve Prophets, Aleijadinho also designed the Church of Saint Francis of Assisi, a Rococo Catholic church in Ouro Preto, and a scene from the Passion of Christ with 66 life-sized figurines carved from wood. The figurine project took 10 years (lasting from 1780 to 1790) and begins with the Last Supper, ends with Christ’s crucifixion, and includes the main characters of that time like Mary and the disciples James, John, and Peter. 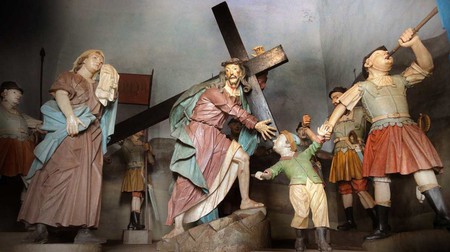 There is a museum dedicated to Aleijadinho

Set inside the Igreja Matriz Nossa Senhora da Conceição church is a museum that pays tribute to Aleijadinho by displaying his and other 18th-century artists’ masterpieces, including religious figurines and finely-detailed crucifixes (and the decorations of the nave are credited to Aleijadinho’s father). The exhibition is spread across another two churches, the Igreja São Francisco de Assis and the Igreja Nossa Senhora das Mercês, and it’s possible to walk between the three.

Aleijadinho has works in several cities

Though the most famous of Aleijadinho’s works is found in Ouro Preto, his art can be found in other cities in Minas Gerais. He is credited with some of the decorations on the Our Lady of Mount Carmel Church in Sabará, a city approximately 10 miles (15 kilometers) from Belo Horizonte, and with the facade structure and main door of the main Church of Saint Anthony in Tiradentes.

Aleijadinho died on November 18, 1814. His body is entombed in the Nossa Senhora da Conceição church in Ouro Preto and can be visited during opening hours.