10 Things to Know About Trancoso, Bahia 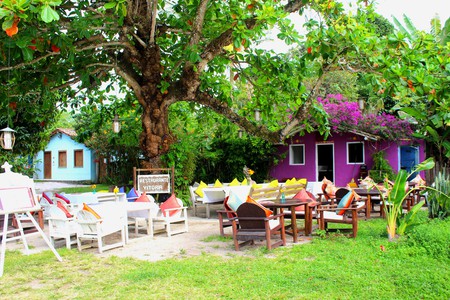 A restaurant on the Quadrado © dany13/Flickr

The little town of Trancoso, in the south of Bahia, has captured the attention and stolen the hearts of many a traveler. Since it was discovered by Europeans in the 1500s, it has been through various incarnations to become a holiday spot beloved of Brazilian bigwigs, celebrities, models, popstars and tourists. Before you go, here are a few things you should know.

At its heart, a church

Trancoso’s church is the emblem of the town. Its pristine white front with curved gables and a crucifix that punctures the powdery blue sky stands at the coastal end of the Quadrado, a grassy village green. The Igreja de São João Batista has had its roots in the town for centuries, having been established by evangelising Jesuits in the 1600s over a century after Portuguese explorer Pedro Alvares Cabral first landed on the shores in 1500. Regular Catholic services are still held in the church and it is not unusual to see wedding parties streaming in or out of it today. 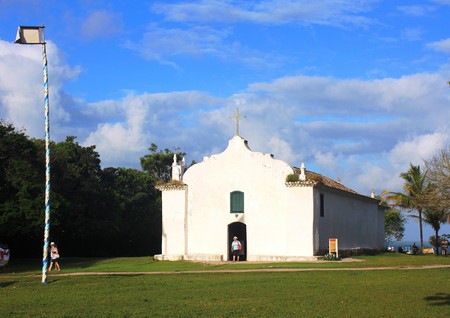 And a village green

One of the features that makes Trancoso so charming and so friendly is the Quadrado. It is a rough rectangle of grass edged by ancient trees that shelter brightly coloured fishermen’s houses. Painted in shocking pink, daffodil yellow and cobalt blue, the houses are all built in a similar style, tiled and one storey high, some with split stable doors which are often left open. The Quadrado is for everyone and frequently there are children playing, football games going on, animals grazing or people making their way from the town to the beach. It feels like a way of life lost in time. 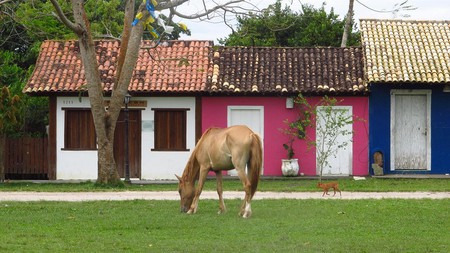 Where the horses run free

Trancoso itself sits on an escarpment above two main beaches: Praia dos Nativos and Praia dos Coqueiros. You reach them by walking through the mangroves on a wooden walkway. A few beach bars and restaurants are stationed along the sand but there is remarkably little development. As the tide recedes, football games begin and old fishing boats are left tipped on their sides. As pedlars tread the sands, sunbathers recline and relax and the odd kiteboarder weaves across the waves. It is not unusual to see horses galloping through the shallows, mounted or otherwise. 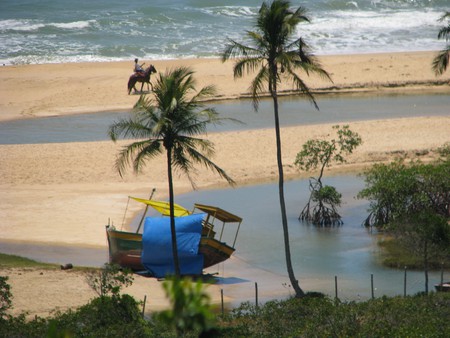 Celebrities have been sighted

The delights of Trancoso are well celebrated in celebrity circles. Brazilian models like Alessandra Ambrosio and Gisele Bündchen stretch their long legs on the beach; Naomi and Kate have been down too; Beyonce shot part of her Blue video in the town and her sister, Solange, spent her honeymoon here. Uxua, a hotel made of exquisitely designed casas on the Quadrado is their favored place to stay. Comfortable and private yet unfussy and unpretentious, it is ideal for off-duty celebs.

It has its own music festival

Música em Trancoso is a classical, jazz and Brazilian music festival that started in 2012. It happens over eight days between Carnival and Easter each year, bringing top-class musicians from all over the world to play events and concerts for the town and visitors. Beauty brand L’Occitane en Provence sponsored the construction of a futuristic-looking amphitheatre and throughout the year various programmes promote music learning among local children.

Electricity has been a recent addition

Until some roaming hippies came across the sleepy and remote town in the late seventies, Trancoso was virtually cut-off and relatively unknown. Its inhabitants were self-sufficient, bartering and exchanging objects or skills instead of using money. Some of the travelers settled in the town and slowly development came too. In 1986, electricity arrived to parts of town and in 2004 the first ATM came into service. Happily, some features of life in Trancoso remain delightfully unmodernised and certainly unhurried.

Brazil’s high season runs from Christmas until the last crack of Carnival and this is when Trancoso hums with visitors in search of a good time. Party organisers, like Café de la Musique, arrive to set up beachside venues, restaurants put on special menus and hotels offer holiday packages. All along the coast just before midnight on December 31st, the beaches flood with partygoers wearing white, jumping over waves in the sea as is the tradition in Brazil. The Festa do Taípe on Taípe beach along the coast from Trancoso is one of the most sought-after new year’s eve tickets, attracting the rich and the famous who party hard on the sand until the sun comes up.

Given its special status among the wealthy and well known, it is no surprise that Trancoso has its own international airport for private jets and helicopters. Instead of flying to Porto Seguro (70 mins from Rio de Janeiro; 1 hour 45 mins from São Paulo) and then making your way by car to the town, those who can afford to fly straight to the seaside, landing just alongside the upmarket golf club.

Though Trancoso oozes unpretentious, rustic simplicity, don’t be entirely taken in by its seemingly effortless aura. The price of a house on the Quadrado is such that only the likes of CNN news anchor Anderson Cooper has the means and money to get hold of one. The airy shops that open their doors in the cool of the evening sell eye-wateringly expensive jewelry, dresses and bikinis as do the homeware stores. Dinner, while being delightful and delicious, will more than likely set you back a fair few pennies. The Trancoso experience is laid back and lovely; cheap however it ain’t and if you look closely no one is making it look that way.

A post shared by Andrea Balastreire (@andreabalastreire_arquitetura) on Nov 25, 2016 at 9:34am PST

A marvellous place for a moondance

It would make sense that Trancoso’s undisputed magic comes from the glorious nature that surrounds it. That feeling is never stronger than when the full moon rises. To see a huge round glowing golden disc emerge sliver by sliver out of the sea is an awesome experience. Uxua hotel often organises a Luau – a traditional celebration of the moon’s rising with music, dance and drinks. When you see the bright beaming light laying a path to your feet across the surface of the sea, it confirms above all else why the pull of this place is so strong.