10 Things to Know About Festa Junina in Brazil 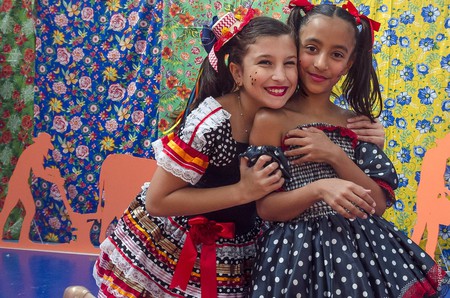 The costumes of Festa Junina in Brazil | © CSA Contagem / Flickr

If you missed out on Brazil’s Carnival in February, fear not—the month of June brings with it the festivities of Festa Junina. Though it may not have the huge parades and the samba that Carnival does, this Brazilian celebration still features costumes, traditional music and dance, typical foods and drinks, and a month’s worth of festivities.

Festa Junina, or the June Festival, is a Catholic tradition that was introduced to Brazil during the country’s colonisation by Portugal (from 1500 to 1822). Its events are based on the European Midsummer festivities, which celebrate the harvest and the saints, mainly Saint Anthony, Saint John the Baptist, and Saint Peter. Despite its religious origins, the emphasis of Festa Junina is on creating a large social gathering of dancing, drinking, and eating, especially in larger cities. 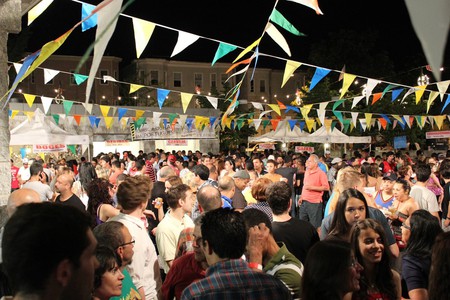 Where is it celebrated?

All of Brazil celebrates this annual event. The major cities have the largest celebrations, though individual events can be found in almost every neighborhood. These are held in different venues, from schools and churches to houses, bars, and event spaces. The largest festivities happen in the northeast of Brazil where the scale of celebrations is similar to Carnival.

When is it celebrated?

Festa Junina begins in conjunction with Brazil’s winter and lasts throughout June. In some areas (especially the north and the northeast), it continues through to July.

How is it celebrated?

Because this festival celebrates the harvest, events can take on a rural theme, as do the costumes, which resemble a typical countryside style and conjure images of farmers. Dancing is also an important part of the celebrations and is centered around the quadrilha, a typical Festa Junina dance accompanied by a music genre called forró.

There are different types of foods associated with Festa Junina and because it’s a family-friendly celebration, most schools host an event that’s open to the parents and families of the children, who put on performances and play typical games such as catching prizes with a fishing rod, running three-legged races, and participating in ring tosses. Some parties will include a bonfire, a tradition that is typical in the south of Brazil. 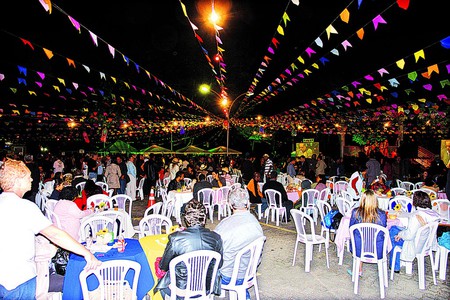 The celebrations of Festa Junina are relatively the same across Brazil, with some exceptions in the northeast of the country where the festivities are more extravagant and last longer. However, there is one place where the festival is very different: in the state of Maranhão, Festa Junina is celebrated through variations of an event called Bumba Meu Boi. This dance is rooted in Brazil’s historically lower social classes and is believed to have started when slaves and rural residents created their own event as a passive rebellion against the wealthy upper class. The event serves a narrative function, yet, because it has so many variations, it’s impossible to pinpoint a single storyline. Most stories are loosely built around the tale of a bull dying and then coming back to life. 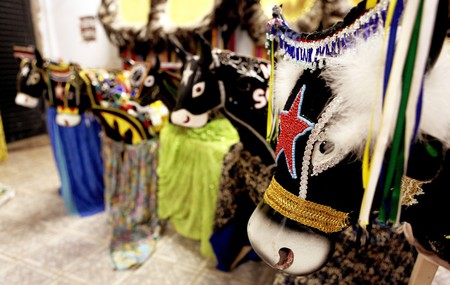 The food of Festa Junina is comforting and uses local ingredients—as you would expect of dishes made in the countryside. Typical foods include bolo de fubá (corn cakes made from finely ground rice or corn flour), curau (corn mixed with condensed milk and peanuts, then topped with cinnamon), cocada de colher (shredded coconut mixed with condensed milk and butter), pé-de-moleque (a type of sweet treat made with hard toffee and peanuts), and paçoca (candy made out of crushed peanuts). 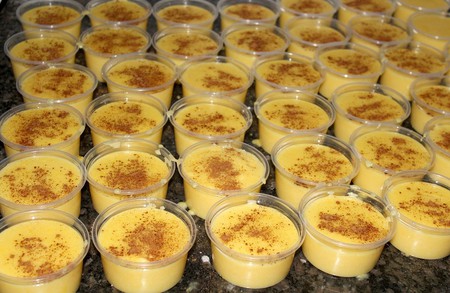 Curau, a typical sweet food that is made with corn | © VetoNogueira / Pixabay

The two most typical drinks are quentão (a hot drink made with cachaça, ginger, sugar, cloves, and cinnamon) and vinho quente, which is similar to mulled wine.

The clothing and costumes

The typical costumes of Festa Junina are country-themed in a Western style, with denim shorts for girls and checkered shirts for both men and women. Some girls even braid their hair and paint freckles across their cheeks, but almost everyone dresses up to some degree during the festivities.

The costumes of Festa Junina in Brazil | © CSA Contagem / Flickr

The dance of Festa Junina is the quadrilha, a type of square dancing in which couples dress up as caipiras (a term used to refer to people who live in rural or remote areas of Brazil). The women typically wear makeup and paint freckles on their faces while men may paint on a mustache and a goatee. Accompanying the dancing is forró, a music genre that is to the northeast of Brazil what samba is to Rio de Janeiro. It’s played with an accordion, a zabumba, and a triangle and is an uplifting, fast-paced genre of music popular throughout Brazil, especially during the Festa Junina. 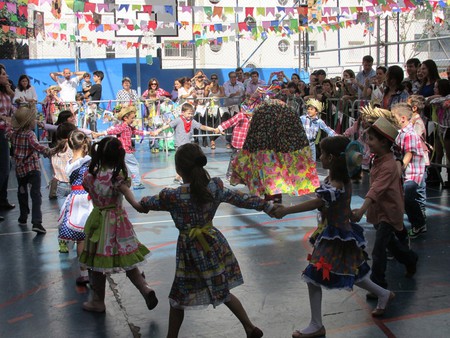 After Carnival, Festa Junina is the largest celebration in Brazil. As with Carnival, some cities have bigger festivities and events than others. The largest of all the celebrations happen in Campina Grande, in the state of Paraiba, and in Caruaru, in the state of Pernambuco—both in the northeast. Each region attracts millions of visitors each year and the parties there continue well into July. The state of Bahia also has large-scale celebrations, especially in Porto Seguro.