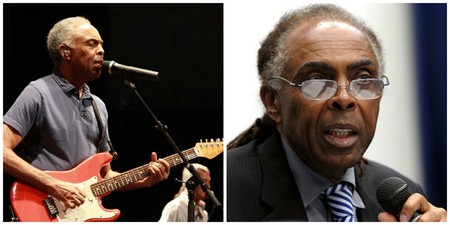 Gilberto Gil is an extraordinary person. He created a new wave of music, became the Godfather of Brazilian music genre Tropicalia and produced some of the best songs Brazil has seen. Aside from his significant musical background, he also had a powerful political career with a five-year reign as the Brazilian Minster of Culture. We dive into the history of Gilberto Gil to discover why this man is a Brazilian national hero.

He Participated In The Olympic Opening Ceremony

His song Aquele Abraço was used in the theme tune for the Olympic opening ceremony video. He also sang live on stage during the ceremony. Dressed in a crisp, white suit and joined by life-long friend Caetano Veloso and Brazilian singer, Annita, he sang Isto Aqui, O que É? which was well-received by his millions of fans throughout Brazil.

His Humble Beginnings And Work Ethics

People can identify with Gilberto Gil. Although he was born into what he describes as a middle class family, he was still brought up in a relatively poor area in Bahia. When he started out his music career, he wasn’t afraid to do hard and tedious work to get to where he wanted to be. As a result, he sold bananas in a shopping center and made catchy jingles for TV adverts to help source his income.

Music Was Always In His Soul

Gilberto’s passion for music has always been there. When he was just three years old, he started playing the drums. At seven, he taught himself to play the trumpet by playing along to the radio, and in his teens he learnt to play the accordion. In was in his adolescent years that he joined his first band, ‘Os Desafinados,’ who were active for three years. Their distinctly Brazilian sounds was influenced by American Rock, highlighting the cusp of a change in musical direction in Brazil.

He Was Imprisoned For Seven Months For His Music

Gilberto formed a partnership with Caetano Veloso when they were in college and they produced their first single together at the same time. Together, they created popular music that the Brazilian military government felt was indirectly protesting against them and dealt with the threat by arresting the two musicians. He was shortly arrested after his single Aquele Abraço, which was considered revolutionary. Despite never having been given a reason or charge for arrest, they spent three months in prison and four months under house arrest before being exiled.

He Was Exiled And Lived In London

After his time in prison, he was exiled to London in 1969 where he lived in Chelsea with Caetano, their wives and their manager. It was in London that he was exposed to music legend, Bob Marley and became involved in the rock scene at that time, performing with Yes and Pink Floyd. This turned out to be a rich source of influence for his music. He returned to Bahia, Brazil in 1972.

Gilberto Gil Is One Of The Godfathers Of Tropicalia

Tropicalia was born from two creative movements that were running at the same time in two separate continents. In Brazil, samba and bossa nova were the music genres that were taking over the music scene, whereas in Europe, a new cultural revolution was sweeping across the continent, an attitude that resisted authorities and rebelled against cultural restraints. These European influences leaked into Brazil, penetrating music and ideas with new structures and values. It became a new movement involving music, literature, poetry and theater that took the name Tropicalismo from Gilberto and Caetano’s album, Tropicália: Ou Panis et Circenses, with their music becoming the anthem of the movement.

He Has An Impressive Collection Of Awards

Throughout his extensive career, Gilberto has won several awards, both in music and for his involvement in activism. 1999 was a particularly great year for him, both musically and politically, winning the Grammy Award for Best World Music Album, the Order of Cultural Merit from the Ministry of Culture, and the UNESCO Artist for Peace from the United Nations.

His Musical Is Highly Influential And Popular

Brazilians love his music, especially with its deep roots in Bahian culture, acting as a representative of music from this region. However, his music is largely experimental and has evolved a long way from his first years as a musician when he combined samba and Northeastern music. Over the years, his interest in rock and punk gave birth to Tropicália, and in later years his albums reflected African music and reggae influences. One of the most famous of these African-inspired recordings was his album Refavela, which includes the reggae- influenced track, No Norte da Saudades.

He Has Had A Successful Political Career Too

Wishing to channel his influence into something positive, Gil started his political career back in 1987 as Secretary of Culture in Salvador. He later founded an environmental protection organization called OndAzul (Blue Wave) that aims to protect Brazilian waters. Between 2003 until 2008, he was Minister of Culture, using his position to fund grants for music and technology education for youth in the poorer areas of Brazil.

He Made A Tribute To Bob Marley

Gilberto Gil brought reggae to Brazil in 1980 when he released a cover of No Woman, No Cry with Jimmy Cliff. He was so influenced and impressed by Bob Marley that he made a tribute album to him called Kaya n’Gan Daya.